We analyzed in Cinemascomics the limited digibook edition on Blu-ray of Until His Time Arrived, Sergio Leone’s masterpiece

In Cinemascomics we have analyzed the limited domestic edition on Blu-ray Digibook of ‘Until its time’, on the occasion of its 50th anniversary. Sergio Leone’s influential masterpiece is now available in its original format, loaded with extras and accompanied by an exclusive booklet.

The tape has been remastered and reissued on Blu-ray, available at all points of sale while stocks last. The film is distributed in Spain in physical format by Paramount Pictures (Sony Pictures Home Entertainment), and is also available for rent and digital sale, through the main platforms operating in Spain.

The film that Quentin Tarantino himself said was the one that made him think about being a filmmaker, the one that taught him how a director does what he does, how he can control a work through his camera, being almost like a school of cinema compressed into a film. The title of his latest film, ‘Once upon a time in … Hollywood’, is a clear tribute to the work of the Italian filmmaker. But he is not the only one, since considered the 1968 film as one of the best westerns of all time, it has influenced countless directors for decades.

This special edition, essential for any lover of the best films in the history of cinema and of the most exclusive collector’s editions, includes the feature film in its original format, substantial additional content and an exclusive booklet (with texts in English) that summarizes the story behind the legend, with production notes, fun facts about the characters and the shoot and photos on the set.

The film is set in the American Wild West, in full expansion of the settlers and with the railroad as a sign of progress and technological power. In this way, we meet Brett McBain, a widowed farmer of Irish origin, who lives with his children in a poor and desert area of ​​the American West. He has prepared a welcome party for Jill, his future wife, who is coming from New Orleans. But when Jill arrives, what she will find is that a gang of gunmen has murdered them all, and this will be the beginning of a journey in which a group of different people will cross their destinies seeking revenge.

Until its time has a duration of 165 minutes, 2.35: 1 Anamorphic Widescreen color film, with audio in English DTS-HD Master Audio 5.1, and Spanish, French and German in Mono; as well as subtitles in English for the deaf, English, Spanish, French, German, Dutch, Danish, Swedish, Norwegian and Finnish; It is not recommended for children under 12 years of age. This special version on Blu-Ray Digibook is presented with a very careful design, which will be an object of collection for the great lovers of the seventh art, and that we have analyzed for the readers of Cinemascomics. The analysis is completely free of spoilers, in case you have not yet had the opportunity to see this cult film, now with the restored image and in maximum quality, and you want to know what extras it contains.

An opera of violence:

Documentary directed by Lancelot Narayan, 29 minutes long and released in 2003. Sergio Leone’s film is analyzed, highlighting that it restored confidence and security to Hollywood that a western could be a good movie, with statements from members from the industry, raving about the film, such as director John Carpenter; historian Sir Christopher Frayling, author of the book “Sergio Leone: Something to do with death.” The latter tells of the filmmaker’s origins in the world of cinema, seeing how his father (director) and mother (actress) shot silent films in Rome.

Later, he was doing small jobs as an assistant in movies and climbing steps, until he became assistant director of great Italian directors of the time. Thus, he made the leap to directing with The Last Days of Pompeii (Gli ultimi giorni di Pompei), when director Mario Bonnard died in 1959, during the filming of the film and Sergio Leone had to finish directing it. Later he directed Il colosso di Rodi (The Colossus of Rhodes, 1961) and gained experience in Hollywood films shot in Rome, such as Cleopatra, Quo Vadis or Ben-Hur.

In 1962 there is a collapse of the Italian film industry, but Sergio Leone’s films manage to reactivate it.

With Until Your Time Has Arrived, Leone wanted to make a film that was a tribute to the western ones he loved, albeit turning them around a bit, so that they had a different meaning. Leone himself explains that after El Bueno, El Feo y El Malo he no longer wanted to do more western, but Once Upon a Time in America; but they wouldn’t let him do it, they wouldn’t finance it if he didn’t shoot C’era una volta il west (Once Upon a Time in the West) before.

Bernardo Bertolucci comments on how he met Sergio Leone and that what he told him convinced him to write the script for Hasta Que Llegó Su Hora with Darío Argento. Thus, Bertolucci was the one who convinced him to give an important role to a woman in a western, and that honor (little or nothing common in the western of the time) fell to Claudia Cardinale. Along with this, the actress herself and Henry Fonda talk about their first contact with the director in particular and with the project in general.

The wages of sin:

Second part of the documentaries directed by Lancelot Narayan, in 2003, focused on the film, lasting 20 minutes, and this time focused on the setting and photography of Sergio Leone’s filmography.

Claudia Cardinales comments that they started shooting the film in Spain, specifically in Almería, and then they went to Monument Valley to shoot some scenes. Tonino Delli Colli, director of photography for Hasta Que Llegó Su Hora, explains that the setting was similar to that of The Good, the Ugly and the Bad; so they went to the same locations that they used for La Diligencia. Much of the film was shot in Almería; where, to square the scenes shot in the United States, they imported bags of dust from Monument Valley and spread them in the Almeria locations.

Along with this, since the budget was not a problem, Leone wanted to faithfully reproduce the American peoples of the time, which he had in photographs that he gave to the production and set team. Thus, recreating the city of Flagstaff cost more than the entire budget of For a Handful of Dollars. They continue by explaining their way of shooting and their predilection for close-ups of the characters’ faces, as well as their perfectionism in all the scenes.

Something to do with death:

Third and last documentary directed by Lancelot Narayan, also from 2003 and lasting 18 minutes; which, on this occasion, is focused on the music composed by Ennio Morricone. He states that for this film, the music was composed before filming, where there are only four different musical pieces, each related to a different character, and then they were mixed as relationships developed. So, Leone would put Morricone’s music on the recording set during filming, and then they would start recording, because the director always said that 40% of a movie is sound.

They then talk about how all of Leone’s filmography is steeped in politics, that money and greed are actually the forces that move people to behave the way they do. But in this film he is encouraged by the railroad theme. In turn, they comment that this film is the longest artistic western in history.

Along with this, they state that the American critics were not kind to the film, saying that it was very long, slow and that it seemed that it would never end. Given this, the producers got nervous and cut the footage for the final cut; and, to the point that added to the previously deleted scenes, before the first passes, no viewer has seen the full version. In this way, only in the cinemas of Paris was the film seen with the additional 20 minutes, suppressed in the version released in the United States and other countries, depriving viewers of seeing the version as Sergio Leone had imagined it. They end up remembering the first time they saw the movie and what it felt like to finish it.

A Railroad: Revolutionizing the West:

This documentary by Enfys Dickinson, also from 2003, talks about the influence of the railroads on the western in general and on this film in particular. Thus, the railroad as a symbol of American progress and prosperity in the 19th century, constitutes a dividing line between virtue and greed, between the optimism of the colonists and the corrupt world of the unscrupulous tycoons.

In the film there is a certain political metaphor due to the railroad, because in other films it symbolizes the arrival of civilization, but here it also implies the arrival of money and the power of the tycoons of the old continent, who arrive in the new world and soon corrupt everything in its path.

The exteriors of then and now:

They show us comparative images, natural scenes of the film, showing the contrast between how they were when they were captured on the big screen and how they are today.

Photographs during the filming of the film of Claudia Cardinales, Charles Bronson, Henry Fonda, Jason Robards, Gabriele Ferzetti and the rest of the cast.

In original version, without subtitles.

15-page booklet, by Trevor Willsmer, with the story behind the production, photographs and anecdotes of the film.

Finally, let’s hope you enjoy buying ‘Until Your Time Has Come’, now available to take home on DVD, Basic Blu-Ray and Digibook Blu-ray; as well as in digital format. And, in this way, you will be able to see it as many times as you want, both in its original version and dubbed into Spanish. 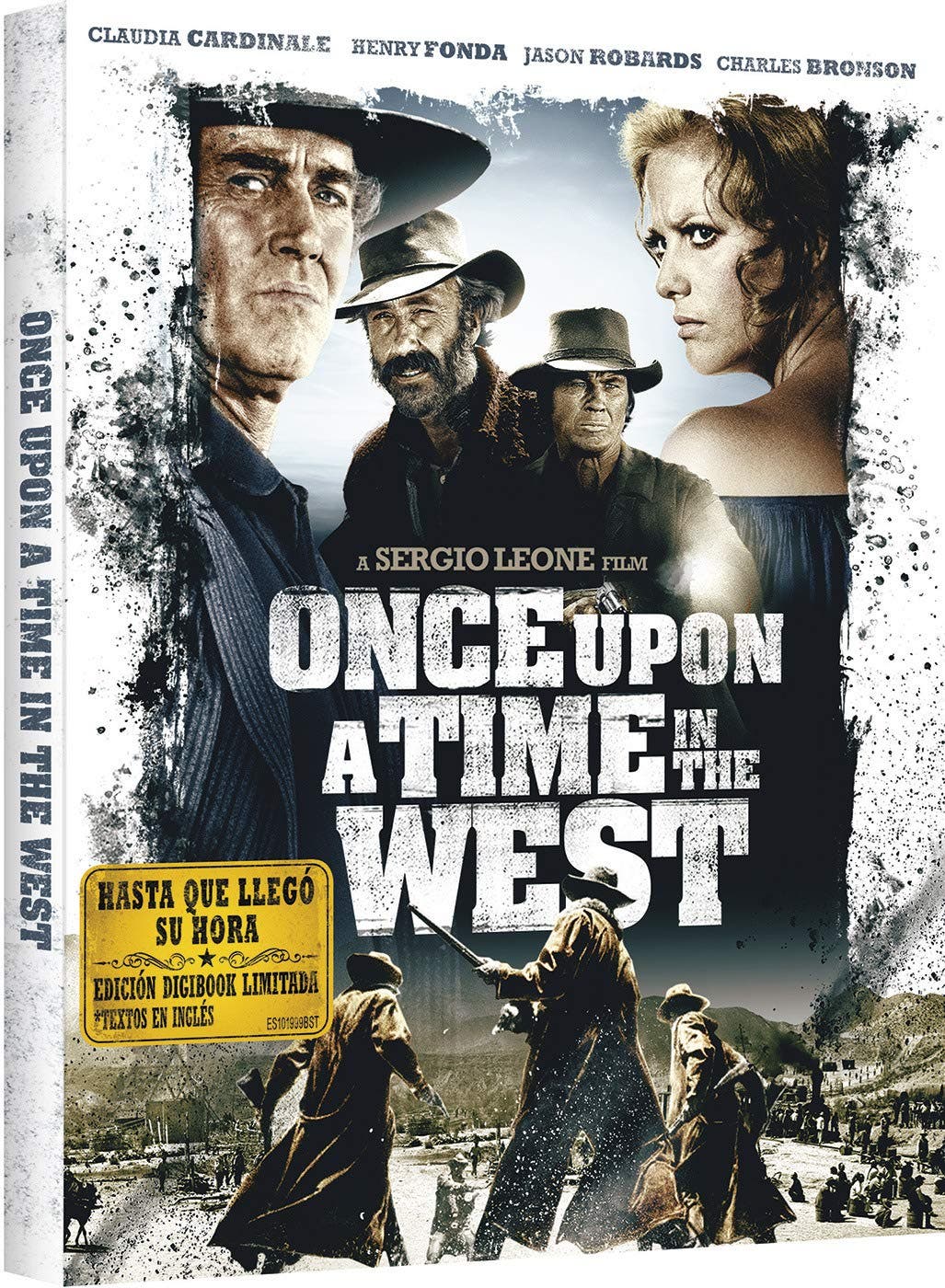 Until His Time: Blu-Ray Digibook

Sergio Leone’s monumental film, now in its original format, is considered one of his greatest achievements. At the end of the golden age of the Wild West, a confrontation between three tough gunmen to control the water in a dusty desert city takes place, leading to an epic conflict full of greed, honor and revenge. Henry Fonda, in his most sinister character, plays Frank, a hit man who kills an entire family. Jason Robards is Cheyenne, an infamous bandit accused of the carnage. And Charles Bronson is the Man, a mysterious and lonely guy determined to carry out revenge for something he does not want to comment on. This masterpiece, considered one of the best Westerns ever shot, still endures and has a great influence on many directors.