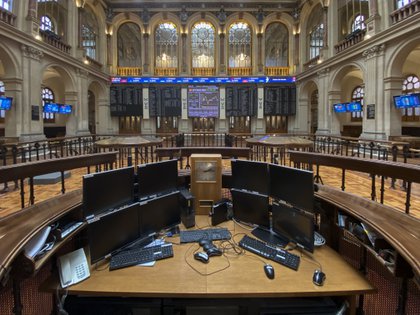 09/22/2020 Computers inside the Madrid Stock Exchange Palace (Spain), on September 22, 2020. The Ibex 35 experienced a 0.12% decline in the half session this Tuesday, which led the selective to stand at 6,684.2 integers at 12.00, in a day marked by fear and uncertainty due to the impact of a second wave of Covid-19 and in which oil is trading stable. ECONOMY Eduardo Parra – Europa Press

The Ibex 35 started the session this Friday with a rise of 0.13%, which has led the selective to 7,940 integers at 9:01 am, attentive to the impact of the second wave of Covid-19, with new restrictions for Christmas in different European countries, including Spain, and the United States.

In this way, after falling 0.64% yesterday, the Madrid selective began the session clinging to the psychological level of 7,900 integers, in a context that is still marked by the expectations generated in the markets by the news about the advances of Pfizer and Moderna vaccines.

The rest of European squares were trading 0.1% higher for London and Paris, while Frankfurt was down 0.1%.

In this scenario, a barrel of West Texas Intermediate (WTI) oil, the benchmark for the United States, was trading at $ 41 at 9:01 am, after falling 0.1%, while Brent crude, the benchmark for Europe, marked a price of 44 dollars, with an increase of 0.1%.

For its part, the Spanish risk premium advanced positions to 63 basis points, with the interest demanded from the ten-year bond at 0.065%, while the price of the euro against the dollar stood at 1.1871 ‘green bills’.