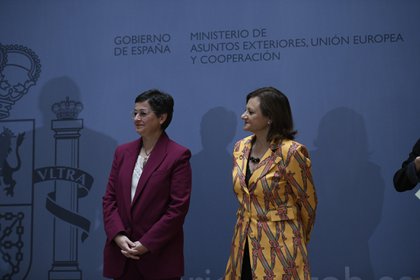 02/07/2020 (ID) The Minister of Foreign Affairs, European Union and Cooperation, Arancha González Laya; and the new Secretary of State for Foreign Affairs and for Latin America and the Caribbean, Cristina Gallach, during the inauguration of the Secretaries of State for Foreign Affairs, for the European Union, International Cooperation and Global Spain, in the Patio Elcano from the Palacio de Santa Cruz, in Madrid (Spain) on February 7, 2020. POLICY Óscar Cañas – Europa Press

Various ministries and institutions, coordinated by the Ministry of Foreign Affairs, EU and Cooperation have launched a virtual course on the management of asylum applications and refugee integration aimed at officials from Central American countries, where migrant caravans fleeing poverty and the violence directed at the United States have marked the region’s agenda.

The course is aimed at officials from countries that belong to the so-called Comprehensive Regional Protection and Solutions Framework (MIRPS), an initiative of Belize, Costa Rica, El Salvador, Guatemala, Honduras, Mexico and Panama to apply the Global Compact on Refugees in that region.

The MIRPS Support Platform includes Argentina, Brazil, Canada, Colombia, France, Italy, Sweden, Uruguay, Switzerland and the US, the EU, as well as UNHCR and the OAS, which act as technical secretariat. Spain chairs the platform between June 2020 and June 2021.

“Spain wants to achieve a real impact to improve the situation of the forcibly displaced and the communities that host them,” Cristina Gallach, Secretary of State for Foreign Affairs and for Latin America and the Caribbean, said at the inauguration on Monday.

In the inauguration, the Vice Minister of Foreign Relations, Economic Promotion and Integration of El Salvador, Patricia Comandari, also participated on behalf of the Pro Tempore Presidency of the MIRPS.

The objective of the course is to learn about and share experiences in areas such as applicable legislation, the use of technology in the refugee status determination and registration processes, the integration of refugees and asylum seekers in host countries, with special attention to the role of the private sector.

The treatment of a particularly vulnerable group such as unaccompanied minors will also be addressed; and the fight against human trafficking, which largely affects women and girls.

The course, coordinated by Foreign Affairs, is given with the collaboration of the Ministry of the Interior, the State Attorney General’s Office, the Ministry of Inclusion, Social Security and Migration, UNHCR and the IOM, with the support of the INTERCOONECTA program of the Spanish International Agency for Cooperation for Development (AECID).