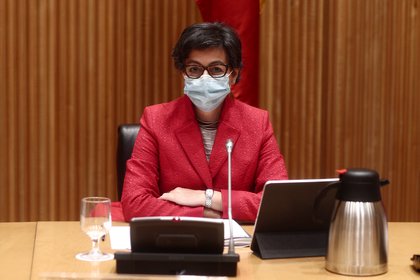 01/20/2021 The Minister of Foreign Affairs, European Union and Cooperation, Arancha González Laya, during a Joint Commission for the European Union in the Congress of Deputies to report on the principle of agreement between Spain and the United Kingdom on Gibraltar and on Brexit, in Madrid (Spain), January 20, 2021. POLITICA EUROPA PRESS / E. Vine. POOL – Europa Press

The Minister of Foreign Affairs, EU and Cooperation, Arancha González Laya, has shown this Wednesday her joy at the arrival at the White House of Joe Biden and in particular of Kamala Harris as first vice president, at the same time that she has opted for a “broad relationship “bilaterally with the new US Administration.

In statements after appearing before the Joint Commission for the EU in the Congress of Deputies, the head of Diplomacy has justified her “great joy” at the fact that Biden is a “president who believes in multilateralism, in dialogue, in the pact, in the negotiation and that represents interests but also values, something with which Spain feels very identified. “

Likewise, he highlighted the milestone that implies that Harris is the first vice president of the United States, “because of what this implies commitment and advancement of equality” in this country and for “all of us who look at ourselves in some way in the United States. “.

Once Biden takes office in a few hours and his government is formed, González Laya pointed out, it will be necessary to get to work “to promote a new transatlantic relationship and also closer relations between Spain and the United States.”

At the bilateral level, the minister has indicated that the Government is committed “to a relationship that is broad and deep as deep are our ties and our citizen, business, student and tourist ties.”