Undiscovered Country transports us to a near and dystopian future that opens before us through the pages of the new collection by Scott Snyder and Charles Soule, with a drawing by Giuseppe Camuncoli. Planet Comic opens the door for us to discover what happened in the United States after being isolated by a pandemic.

The first thing we come across when approaching this new collection by Snyder and Soule is with a deception. Its first episode takes place for the most part about what seems like a conventional story in which no strange elements intervene, simply a future in which things did not go well and now it may be time to be able to amend it conveniently with the help of the nation that since the 20th century has become the champion of freedom and protector of the world (with its ups and downs), the United States of America.

But as the pages turn, we enter into an absolute madness that suddenly modifies everything that we were forging in our minds. What America are these? What have become? What the hell has happened there since they cut themselves off from the world? Nothing that may cross our minds in those first moments is waiting for us, rather we have fully entered a Mad Max of histrionic characters that we do not know where they will put the limit of their actions.

Undiscovered Country places us in the middle of a journey to seek a cure for the disease that plagues the Euro-Afrique Alliance and the Pan-Asian Prosperity Zone, the two conglomerates of countries that came together to combat the pandemic that devastated them a few years ago and that still wreaks havoc on its population. Hope comes in the form of a message from within the fortified borders of a nation that decided to isolate itself from the rest, to carry out its own process of fighting disease. No one has heard much of the United States since then, and thirty years have passed.

The main group chosen for that first contact with North American territory is very diverse, from political representatives to the military, through experts in the United States or journalists, among others. Together they will verify that what they now face is reminiscent of what they knew about the land of the free, but the changes would blow anyone’s head. The world has changed and within those borders even more if possible, we are not even talking about finding them in the same time line that they maintained before its closure.

Scott Snyder and Charles Soule have taken the bull by the horns and have put it on their heads to twist absolutely everything. They have taken advantage of the knowledge they have about old projects and action plans of the United States Government, thanks to an FBI contact, to turn around the distribution of the country and propose the beginning of a disturbed spiral journey that will take them to the heart of the nation. All this peppered with conspiracies and betrayals and the most terrifying beings that may arise from their collective imagination.

Thank goodness that within so much mental disorder we find the solidity of the drawing of the Italian Giuseppe Camuncoli … who has also been dragged by the maelstrom of drawing disconcerting elements, animals developed in unlikely ways, villains with grotesque and gore approach. Undiscovered Country seems designed to churn our guts as we enter the first of many doors that will lead us to its conclusion. The first area visited by the new discoverers of an unusual America leaves no puppet with a head, of course.

It is difficult to imagine where Soule and Snyder are taking us but what is certain lies in how surprising this kind of road trip into the depths of the United States is going to be that may retain part of its symbols but of course it has lost the ways completely. Total madness. 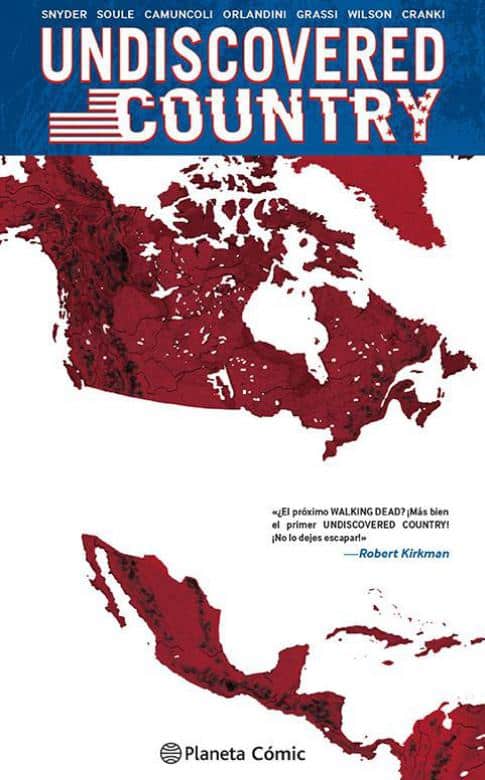 Description : An exciting comic book dystopia What if the US had been locked up and suddenly reopened? Travel to the unknown region once occupied by the United States of America … a land shrouded in mystery and literally separated from the rest of the world by a wall for over a century. After receiving a mysterious call from inside the country, a small expedition enters the territory to carry out an investigation. Each of its members will seek their own truth as they try to survive in a strange and deadly lost continent. This volume compiles the first story arc of this best-selling series, written by screenwriters Scott Snyder (Wytches, AD: After Death) and Charles Soule (Curse Words, Oracle Year, Anyone), with a drawing by Giuseppe Camuncoli (Spiderman, Darth Vader, Hellblazer), Daniele Orlandini (Darth Vader), newcomer Leonardo Marcello Grassi, and Eisner award-winning colorist Matt Wilson (The Wicked + The Divine, Paper Girls).