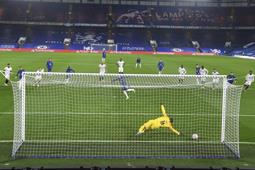 UEFA fined three clubs from the Champions League, two from the Europa League and three national federations on Friday for violating rules set out to protect fans in stadiums during the coronavirus pandemic.

French team Rennes was fined 10,000 euros ($ 11,800), and both Dynamo Kyiv and Hungary’s Ferencvárosi will have to pay 5,000 euros ($ 5,900) each for failing to comply with sanitary protocols, the UEFA disciplinary panel determined. Among the causes of the sanctions are faults in respecting the rules of social distancing, in the use of masks and in making sure that the fans occupy the places that were assigned to them in the stands.

Rennes and the Dynamo were also fined 22,000 euros ($ 26,000) and 14,000 euros ($ 16,600) respectively for blocking stadium hallways for home games in a Champions League season in which the presence of spectators is limited. prohibited in most venues.

In the Europa League, CSKA Sofia and the Rijeka club were also fined 5,000 euros each for similar fouls.

Croatian Rijeka was also found responsible for “illegal chants” from fans in a match against Real Sociedad, for which he will have to pay 10,000 euros.

The Croatian, Latvian and Luxembourg football federations were each fined 5,000 for violating health protocols in UEFA Nations League matches.

Three coaches also faced disciplinary sanctions due to their respective clubs being late to the start of the second half of their respective commitments. Late starts can affect broadcasters’ programming planning.

Shakhtar Donetsk’s Portuguese helmsman Luis Castro received a 5,000 euro fine and a one-game suspension that will serve a postponed suspension for a prior infraction. Shakhtar will visit Borussia Mönchengladbach on November 25.

Coaches Thomas Tuchel of Paris Saint-German and José Mourinho of Tottenham were each put on a one-year trial period. Their clubs will pay 30,000 and 25,000 euros, respectively.