After being fired from the Star Wars franchise, Gina Carano (Deadpool, Kickboxer: Vengeance), who played Cara Dune on the hit Disney Plus series, The Mandalorian – 90%, has returned to the news, because his controversial publications have earned him a warning from Twitter on his profile. In this way, every time a new user wants to see your publications, they must first accept the warning of sensitive content that the platform put up.

It may interest you: Subscribe here to Disney Plus

Carano’s Twitter profile, although it remains public, is now hidden when a user tries to access it for the first time, until they read the warning and click on the option that allows them to see the actress’s tweets. The warning says the following: 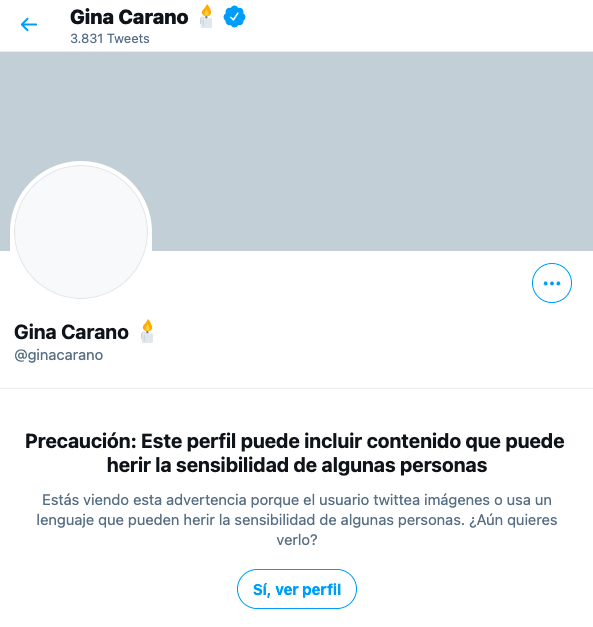 According to Twitter’s support page when it comes to its sensitive media policy, these warnings are placed on accounts that share ‘violent, hateful or adult content within areas that are highly visible’ on the platform.

In Carano’s case, his posts have not been criticized for being adult or violent – at least not entirely. The actress who was part of the streaming phenomenon The Mandalorian She has been accused of showing hateful messages towards different communities, so that was surely the criterion that the social network used to mark her profile with the aforementioned warning.

We recommend you: Gina Carano loses her title as the most popular star in the world

Twitter’s restrictions on ‘hateful’ content prohibit sharing any logo, symbol or image that is intended to promote hostility against people on the basis of race, religious affiliation, disability, sexual orientation, gender / gender identity or ethnicity / nationality of origin.

In recent months, Carano has become a very controversial celebrity, as he has dedicated himself to causing controversy on social networks; a meme referring to the plight of the Jewish people in WWII that the actress compared herself to was what ultimately caused her to lose the role of Cara Dune and Lucasfilm called her online activity ‘abhorrent and unacceptable’

However, despite the warning from Twitter, Carano responded as he has to all the criticisms of his opinions and publications and shared a selfie on the platform to which he added the caption: “sensitive content.”

Don’t leave without reading: Gina Carano would be developing her own franchise