Carlos Sainz achieved the final fifth position for the third time this season and has already chained four consecutive races in points and without dropping from seventh place. We analyze in detail the weekend of the Spanish driver in Istanbul Park.

Finally, the consistency so characteristic of Carlos Sainz is showing itself in this strange 2020 and, after having suffered various inconveniences throughout the first two thirds of the championship, the Spanish rider has already chained four consecutive races in points and ascends to seventh position in the drivers’ championship with 75 points, one more than his teammate Lando Norris.

Although the Spanish has almost impossible to climb more positions, since Daniel Ricciardo -who is sixth- already has 96 points, the truth is that Sainz can feel satisfied with the course of your season in recent weeks, in which it has managed to squeeze its options to the maximum in difficult conditions.

“Istanbul Park should be fun, we depend a lot on how the asphalt behaves”

And possibly the most difficult were in Istanbul Park, during a Turkish Grand Prix that became extremely difficult from the first minute of practice on Friday. We remember all of it.

A new circuit, a new opportunity

On Thursday, Carlos Sainz appeared before the media looking forward to the prospect of riding on a new circuitSince Istanbul Park had not been part of the Formula 1 calendar since the 2011 season, the Madrid native therefore faced the challenge with enthusiasm and the hope of quickly adapting to the conditions.

“Istanbul Park is quite impressive. It is wide, open, fast, slippery, interesting and a challenge for drivers and cars ”, Sainz declared about it. “It is one of my favorite circuits when I start watching races from before. Having the opportunity to drive here is finally special ». 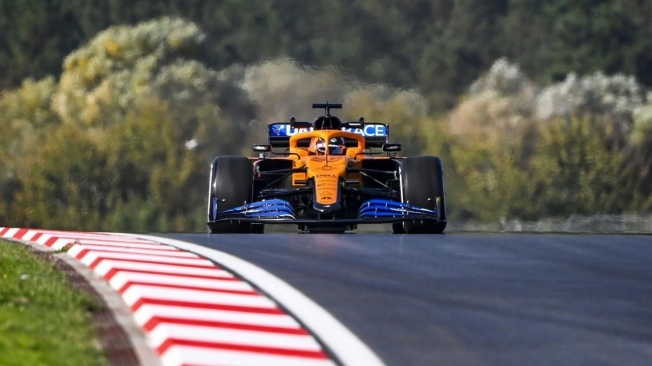 Dirt on the asphalt and an electrical problem made things very difficult for Sainz on Friday.

“I’m surprised by the elevation changes, on television you can’t see them at all, the shape of the curves,” continued the McLaren driver. “It should be fun, we depend a lot on how the asphalt behaves, looks like it will be a bit like Portimao, hard to warm up the tires, maybe not much degradation, maybe a little graining. I think it can create interesting races with these very difficult cars.

What Carlos Sainz, like the rest of his colleagues on the grid, did not expect was to find such a dirty and slippery asphalt, causing the 2020 Formula 1 to roll several seconds per lap slower than in 2011, much less competitive.

The cause was a very recent resurfacing that had not been rolled over, so bitumen and tar resulting from the operation had not been withdrawn and the Formula 1 were not able to make the tires work.

To that had to be added a electric problem which made Carlos Sainz unable to ride for much of the first session, further complicating the set-up of the McLaren MCL35.

“There is a small electrical problem in Carlos’ power unit, we are investigating it,” McLaren informed us about it during the session. “We have tried to fix it in the garage, but the problem has persisted, causing the stop. We will investigate it in depth once the car is back ».

Sainz himself admitted at the end of the day that it had not been “an ideal Friday”, as he could only complete 12 laps in the first session. “It was frustrating to lose filming time in an obviously important FP1 due to the challenging track conditions that we are going to face this weekend on this new and resurfaced circuit, “he explained.

In the afternoon, Sainz completed 40 laps, although without relevant times. “We had quite a bit of ground to make up during FP 2. I didn’t have a very clean lap on the soft tire, and the lap times improved rapidly as the track progressed. The asphalt seems a bit strange for now, but that only adds excitement to see who hits the key.. I’m really looking forward to tomorrow! ”Sainz concluded.

On Saturday things did not improve and the complexity of the asphalt was added to a persistent rain that even forced to postpone qualifying for several minutes. Under these conditions, Sainz could not take advantage of the situation as on other occasions and finished in a disappointing 13th position.

“A very rare classification,” Carlos Sainz admitted. “There was little grip on the track and we spent the whole qualifying session trying to figure out which tire was the right one. In the end I realized, in the middle of the session, that We had made a mistake with the intermediate, when I put the water end it was much better. I have not had time to improve enoughIf I had had a third lap, I would have gone much faster, but that’s what it is, ”explained Sainz. 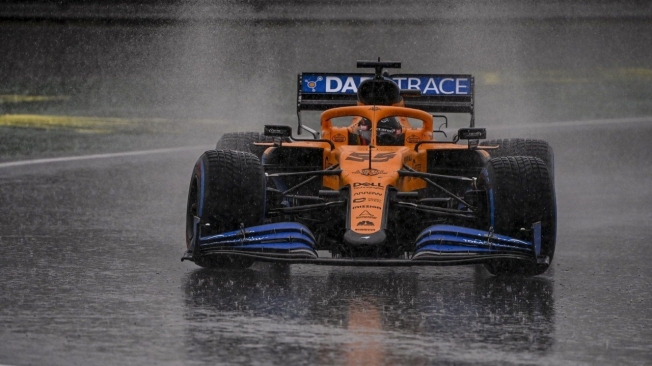 Conditions on Saturday were grim and McLaren failed to get the tires working.

And the thing is that, unlike the rest of the drivers, the McLaren drivers went into Q2 with the intermediate tires on a track where the rain tires were more efficient. “A bit of a strategy error, but also not being able to warm up the tire as much as we would have liked, I think that I have never in my life stayed within 6 seconds in water,” he added. “There is nothing you can do today with the set-up. We are ready for tomorrow, we already saw from the hard wheel (dry, on Friday) that it was very difficult for us to warm up the tires this weekend, more than almost any other team. We expected that in the rain it would be complicated because of this, so we expected this negative result a bit after what we saw in Free Practice 3. Let’s see if tomorrow is dry and at least we can go back a little, “he continued.

Finally, Sainz commented on his opinion about having to testify before the stewards for obstructing Sergio Pérez in one of his laps, ensuring that, on a day like Saturday, seeing or even glimpsing something in the rear-view mirrors is an impossible task. . “I don’t know, because I just don’t see … What I hope is that the stewards take all that into account, which has been a very unusual classification. Everybody out there trying to warm up the tires. You couldn’t see anything, my rear-view mirrors were completely covered, so there was nothing I could do … no, it’s impossible »Sainz concluded.

But Sainz’s explanations did not prevent the sanction and the Spaniard had to go back three positions for Sunday, finally starting from 15th position.

Sunday is when it counts

But everything was fixed on Sunday in one of the most complicated races of recent years in Formula 1, in which rain forced drivers to start on wet tires and in which, once again, Sainz managed to gain several positions in the first lap to complete the first pass through the finish line in tenth position.

From there Sainz proved that he had found a way to get the tires working, progressing solidly to a brilliant final fifth place after perfectly executing the two-stop strategy, the first on lap 10 to switch to intermediate tires and the second on lap 33 to fit a new set of the same compound.

“At the start, we recovered six places on the outside at Turn 1, trying to see who made the mistake and how to pass”

“It’s when it counts,” highlighted # 55 in reference to a well-executed Sunday against free practice and a qualifying in which the McLarens sank. «Until today I have had a very difficult weekend, we could not make the tire work, but today Since the grid laps I have found a couple of things that allowed me to have a little more temperature in the tire. I have gained a lot of confidence, and from there all the race we have been going back ”, he added.

«I did not know very well what to expect after all the weekend we had … You know that I I always feel comfortable in these conditions, as soon as I have rediscovered myself I have been able to make the comeback that I always like to do in the wet, ”continued the Madrid rider. With 10 positions recovered, Sainz crossed the finish line as the member of the grid with the most positions traced behind him.

«We have recovered six positions; on the outside at Turn 1, trying to see who made the mistake and how to pass, and then from there we went one by one. Overtaking was very difficult, because there was only one line, not dry but a bit drier than the others. Off-line he was slippery a lot, so overtaking was not easy. I was able to overtake Stroll, Albon, Giovinazzi and a couple more … who have given me that fifth place that today tastes very good »he explained. Finally, Sainz analyzed how he experienced the last laps of a rather crazy Turkish Grand Prix.

“A pity, because we had the right front wheel very at the limit all those last 10 laps. I saw the Ferraris in front, I saw that I had a rhythm, but at the same time I did not want the Silverstone thing to happen to me, that the wheel delaminates and the race is over. They were also good points and it was necessary to measure how much to push, but in the last three laps I have been at full speed, trying to catch them, and almost. We have saved the day, because after Racing Points starting in the top three, the Renault also ahead and we far behind … I think as a team we have saved the day, it was a very difficult day for usWe did not know if the tires were going to work and we have succeeded ”, he concluded.

With this fifth place in Istanbul Park, Carlos Sainz rises to the seventh position in the drivers’ championship and overtakes Lando Norris by one point, while McLaren remains in fourth place in the constructors’ championship with 149 points, five less than Racing Point and 13 more than Renault.