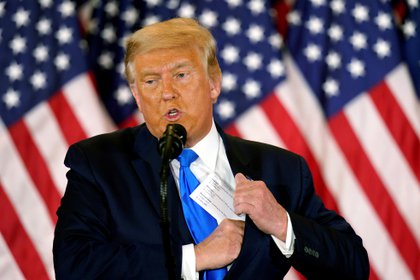 Washington, Nov 18 . .- The president of the United States, Donald Trump, continues to insist that he won the elections of November 3 and that there was a generalized “fraud” that gave victory to his Democratic rival, Joe Biden .
“I won the elections. Voter fraud throughout the country!” Trump wrote on his Twitter account this Wednesday, all in capital letters, along with a series of comments in which he calls into question the cleanliness of the counts and the decisions on challenges your team has filed.
“This was a rigged election. Republican electoral delegates are banned, voting machines fail everywhere (which means they were caught cheating!),” The president wrote, reacting to a poll that points out that their complaints may be undermining trust in the system.
The poll indicates that close to half of Republicans believe Trump’s claims that he won the election and that they were stolen from him by widespread fraud that favored Biden, even though this has not been proven to be true.
Trump’s comments, always with Twitter’s warning that his allegations of fraud “are questioned,” also allude to the decision of the Wayne County Board of Elections, in Michigan, which unanimously certified the results on Tuesday night, after have been blocked due to Republicans refusal to do so.
“Wrong! At first they voted against because there were many more VOTES than PEOPLE (Sad!). Then they were threatened, yelled at and brutally harassed, and were FORCED to change their vote, but then they REFUSED, like American patriots, to sign the documents, “Trump wrote.
Wayne, where Detroit is located, is the most populous county in Michigan, with an 80% black population, which is supposed to have mostly voted for Biden, who took the 16 electoral votes in dispute with an advantage of 2 , 7 percentage points.
Trump also complained again that in Pennsylvania Republican observers “were not even allowed to enter the building to look,” something that state electoral authorities have denied, which Biden also won.
Finally, on the counting of votes in Georgia due to the tightness of the result, “it is a joke and is done UNDER PROTEST. Although thousands of fraudulent votes have been found, the real number is in matching signatures.”
Despite Trump’s complaints, Georgia Secretary of State Brad Raffensperger has indicated that election clerks should compare the signatures on voting envelopes and match them with those of voters.
The Trump campaign has also announced that today it will present a recount petition in two Wisconsin counties, Milwaukee and Dane, considering that there are “absentee votes illegally altered and illegally cast.”
Biden won Wisconsin’s 10 electoral votes by a difference of about 20,500 votes.
On Tuesday, his team also filed a new complaint for alleged “substantial irregularities” and “fraud” over the “unreliability” of vote processing and scanning machines in Nevada.
In that state, Biden obtained 50.1% of the votes, compared to 47.7% for Trump.