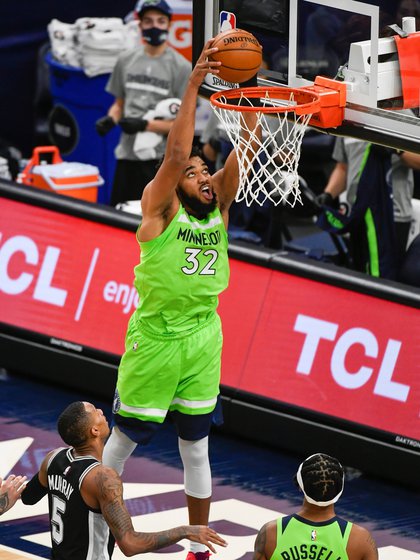 Minneapolis (USA), Jan 15 . .- The contagion of covid-19 continues to ravage the NBA and this Friday the last affected has been the American-Dominican center Karl-Anthony Towns, from Minnesota Timberwolves, who, himself, confirmed through social networks that he had tested positive.
Meanwhile, the president of operations of the Timberwolves, the Colombian Gersson Rosas, said during a press conference that the organization had had two positive tests, including Towns, in the last two days, and that another player was in the tracking protocols of league contacts.
The Spaniards, point guard Ricky Rubio and power forward Juancho Hernangomez, were included in Thursday’s injury report for the Covid-19 health and safety protocols.
Before Rosas ‘statements and Towns’ confirmation of his positive, the NBA had already canceled the game that the Timberwolves were going to play tonight against the Memphis Grizzlies.
Two other games, Washington vs. Detroit and Phoenix vs. Golden State have also been canceled due to Covid-19 health and safety protocols.
The diagnosis is especially difficult for Towns, whose mother, Jacqueline Cruz-Towns, died at age 59 on April 13 of complications from Covid-19. She had dealt with the virus for a month.
Towns said before the season that six other family members also died of complications from the virus.
“Before tonight’s game, I got another terrible call and I tested positive for COVID,” Towns stated in a statement shared on social media. “I will isolate myself immediately and follow all protocols. I pray every day that this nightmare of the virus will go away and I ask everyone to continue to take it seriously and take all necessary precautions …”.
Towns, 25, also said he felt sorry and worried for his family because they relive the nightmare of “anxiety” and the anxiety that the diagnosis of the disease has always left them, although he promised that he will fight to win the battle.
The Timberwolves franchise player missed six games this season with a right wrist injury, but returned to competition last week and is averaging 22 points; 12.5 rebounds and 4.3 assists in four games.
Rosas, when assessing Towns’s diagnosis, called it something “heartbreaking” and added that “it is a lesson for all of us. Basketball is a microcosm of society right now and you can do the right things; our protocol has been solid. Our The staff have done an incredible job of making sure protocols were strictly followed, but this virus is powerful and creative. “
The manager of the Timberwolves reiterated that Towns was an important part of the organization and like the rest of all the players he had the full support as well as his family.