Tom Cruise’s Deep Fake on TikTok is scary. Haven’t they seen it? A new video of Tom Cruise, which is a deep fake, (you know, someone with Tom’s face edited on it), looks so real and authentic that it is scary, shows the actor from Mission Impossible talking about industrial cleaning has gone viral. 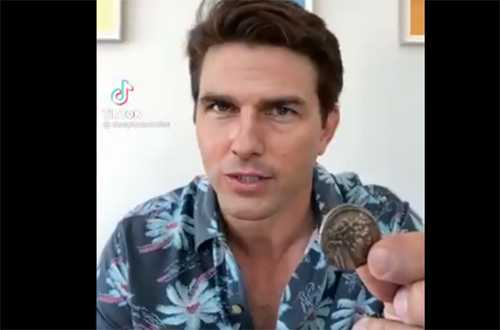 In the video, the deep fake says:

“I do a lot of my stunts, but I also do a lot of industrial cleaning. It is important. So obviously you keep your hands clean but you really need that exfoliating product to cut through the grind. “

“Just another tip for you Tokers,” he added.

According to Independent, on Reddit they have talked about these Tom Cruise videos, calling them terrifying. TikTok user Deep Tom Cruise (@deeptomcruise) has created not only one video, but several of the actor. The funny thing is how they are still online and have not been deleted? Mmmmm … Tom does not know that there is someone doing deep fake with his face?

Just saw the #deepfakes of Tom Cruise and feel like a monkey looking at a spacecraft pic.twitter.com/CRO5NpEMFa

“This shit is really scary. I have no doubt that it has already been used in a nefarious way and we haven’t even realized it. “

“It will get dangerous when they can pretend that military and political leaders say dangerous things with ease. The fraud will get worse when your grandson calls you on video from jail and needs $ 200 to get out. We need to prevent the bad things that come with this, ”added another user.

Another person said, “We are going to grow up to see that all human voices and faces become interchangeable and commodified, aren’t we? We thought we were going to have flying cars, but instead we will get a complete dissociation of personal identity. “

This is not Tom Cruise

This is a deep fake

Another commented that such deep fake videos could ruin our political lives in the future.

“Rightfully the scariest thing that could ruin our politics in the future. Who can say that you can’t deep fake leaders by saying crazy things, or at the opposite extreme have leaders on camera say crazy things and not be able to do anything about it thanks to deep fake? As in the next decade, this will be the worst in the political debate, ”wrote the user.

One said, “I believe this too. This is dreadful. Reality is becoming mutable. “

People talk about political leaders, which, ok certainly, is scary because they are the ones who run the world, and it could cause a world war, an international conflict, but they have expert people who could detect this … but and normal people? If you cheat and cheat normal and naive people over the phone, PHONE !!! Stealing money from them, imagine what you could do with this. All the fake news … omg!

The same if you look at the videos, it’s Tom’s face but there is something that continues to look FAKE, not natural, besides that he looks much younger … but without a doubt it’s scary, it’s like a chapter in Black Mirror. WTF? I still wonder how this person keeps doing Tom’s deep fake like nothing …

So, Tom Cruise’s Deep Fake on TikTok is scary.