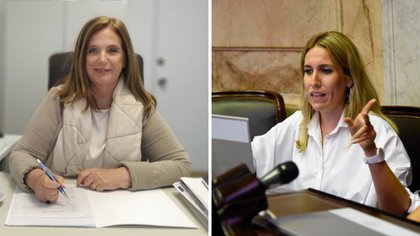 After the scandal unleashed by the journalist’s confession Horace Verbitsky, who received a coronavirus vaccine outside of the shift system due to his proximity to government officials, Together for the Change decided that its representatives do not participate in Alberto Fernández’s official tour of Mexico.

The deputies Carmen polledo (PRO) and Jimena Latorre (UCR) announced that they will not be part of the delegation that will leave tomorrow for the Federal District. The decision was made this Friday afternoon and was announced through social networks.

From the block they also reported that Polledo and Latorre were not summoned to be vaccinated as a result of the trip, nor did they receive any dose against COVID-19 in any other circumstance.

The political impact of Verbitsky’s revelation ended with the resignation of Minister Ginés González García and his replacement by Carla Vizzotti. In the afternoon, Alberto Fernández also asked two leaders not to be part of the delegation that will go to Mexico: the national deputy Eduardo Valdés and the national senator Jorge Taiana. Both were vaccinated last Thursday at the Ministry of Health.

In addition to the two legislators, that day the Chancellor, Felipe Solá, was also vaccinated at the Posadas Hospital. However, the official asked for an appointment and was summoned by the health authorities to get vaccinated.

“I ask the Minister of Health if one who is about to travel to Mexico can be vaccinated and he told me that he will see. And they send me first to the Posadas (hospital) and then to the Ministry of Health, but I never thought that I was doing something illegal, I thought that I should take care of myself and those who traveled with me, ”Valdés said in an interview with Radio con Vos.

And I add: “I don’t feel like I did anything illegal. I felt that I had to be vaccinated and with updated PCR (tests). They give me the vaccine because I am going to Mexico City. The other option was not to travel ”.

The delegation that will travel to Mexico is made up of the Minister of Economy, Martín Guzmán; the Deputy Chief of Cabinet, Cecilia Todesca; the presidential secretary, Julio Vitobello; the Secretary of Communication, Juan Pablo Biondi; and presidential advisor Ricardo Forster.

The objective of Alberto Fernández’s official tour is to meet with his Mexican counterpart Andrés Manuel López Obrador to strengthen a geopolitical agenda that aims to contain the strategic interests of all the countries that make up Latin America.

Both leaders consider that it is possible to join forces from the south of the continent to the banks of the Rio Grande to develop a common roadmap that attenuates the economic and social asymmetries between the rich nations and the states of the periphery.

Not only Verbitsky: the list of vaccinated VIP of the Ministry of González García

González García’s resignation letter: “There was an involuntary confusion of my private secretary”

Roberto Navarro kicked Horacio Verbitsky off the radio: “What he did is immoral”