Home>Tech>To cool its servers Microsoft is immersing them in a liquid, a boiling liquid

One of the biggest challenges for companies offering cloud computing or storage is temperature. Data centers and serial processors often reach extremely high temperatures that degrade their performance. Microsoft’s latest solution? Immerse them in a liquid that cools the servers, only this liquid is boiling.

But what is that about biphasic liquid immersion cooling? It essentially involves immersing the device in a liquid that does not damage the components but at the same time allows the heat generated by them to be collected. That liquid would subsequently cool down and thus we would be facing a single-phase liquid immersion cooling system. That it is biphasic implies bringing it to a boil. With this, a vapor is generated which, upon reaching a condenser, is transformed back into liquid that falls again in the form of rain. Create like this a closed circuit to maintain a constant temperature inside.

The liquid that circulates inside these tanks is a special one from 3M that does not damage the components of the servers. Microsoft says that the liquid boils at 90 degrees centigrade and thus allows the servers to be kept at that temperature constantly. For now they are testing this with an Azure server in Washington, in the future they hope to implement it in more places if it is feasible. 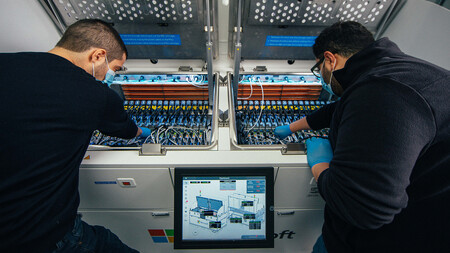 According to Microsoft, they are not the first to use this and in fact it is their own thing in the cryptocurrency mining industry. The important difference here lies in using a biphasic system, they say that with it save 5% to 15% energy for any server.

The obsession with submerging servers

It’s not crazy at all to submerge liquid servers. Server immersion cooling can save maintenance costs, extend device life, and even offer less impact on the environment. It has so many advantages that it is also being sought to implement it directly on the chips.

Going back to Microsoft, the company has some experience dipping servers. A two-year project in which it submerged a data center to the ocean floor concluded in September of last year. They claimed that it failed only an eighth of the number on the ground. Its subsidiary GitHub has also taken data under frozen Arctic water.