Tiger Lake-H will be Intel’s next CPUs for large notebook computers. Machines where performance matters more than consumption and autonomy, such as those for video games or to cover productivity / creativity tasks without having to purchase mobile workstations.

Intel began shipping its new 11th-generation Core platform in September. Codenamed “Tiger Lake”, they are manufactured in 10 nm ++ manufacturing processes known as “SuperFin” and represent a significant generational leap due to their redesign at the transistor level; a 20% increase in process yield; new batch integrated graphics based on Intel Xe (Gen12); new memory controller and the latest connectivity technologies, PCIe 4.0, Wi-Fi 6 or Thunderbolt 4.0.

Following the strategy of previous platforms, Intel released the Tiger Lake with the low-voltage «U» series with the aim of balancing performance and autonomy, and destined to models of ultraportable, convertible, 2 in 1, AIOs or mini-PCs, that are already commercializing the big PC manufacturers.

The “U” series limits the offering to processors with four cores and eight threads. Despite its novelties, including the increase in the CPI, it is obvious that Intel needs something more for big laptops and compete with the AMD alternative with the Ryzen Mobile that offers versions with 8 cores and 16 threads.

Here comes the Tiger Lake-H. They have appeared on the Userbenchmark testing site under the code name “Insyde TigerLake”. Whether this is an engineering sample or a commercial version is unknown, but we don’t think it will be too long before an official announcement. 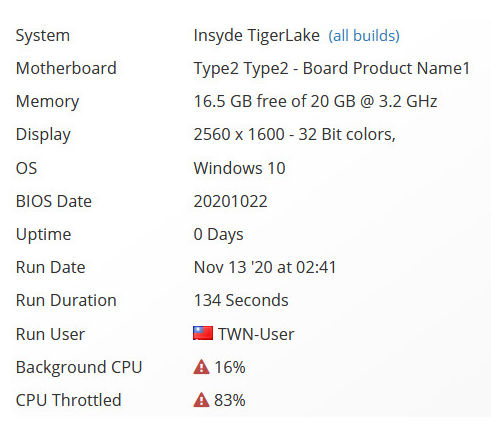 CPU has 8 cores and 16 threads, and in the tests it works at an average frequency of 2.75 GHz. It is manufactured in the ‘Willow Cove’ architecture, manufactured in the aforementioned 10 nm SuperFin silicon node. Its TDP consumption is 45 watts which aligns with the high-performance processors for previous generation notebooks.

If the Intel Xe “U” series GPU includes models with up to 96 execution units, the Tiger Lake-Hs are limited to 32 units, at least from what we have seen so far. The explanation is that these versions are focused on offering the maximum CPU performance and will be combined with dedicated graphics which could be the new ones from Intel (the first in 20 years) or the Mobile series from NVIDIA or AMD. We will have news soon.