In full fever of Nintendo DS and with a spectacular marketing campaign, in Nintendo they managed to place almost 24 million of the different versions of that ball called ‘Nintendogs’. A worldwide phenomenon that made those virtual dogs the second best-selling game on the laptop.

The numbers are spectacular, yes, but they are about to become outdated in front of our noses. ‘Adopt Me!’, Another game that invites us to take care of animals, recently got a whopping 64 million monthly active users.

To put it in perspective, you would have to add the units of the ‘Mario Kart’ and ‘Animal Crossing’ of Nintendo Switch to reach that figure. Or put in the same bag everything achieved by two phenomena like ‘Tetris’ and ‘Pokémon’ on the original Game Boy.

But the comparison is not fair. The big difference between ‘Adopt Me!’ and games like those mentioned above is that we are facing a game free-to-play. Some will say that is having an advantage, of course, and after that they will probably reduce the size of the circle of wonder briefly drawn with their lips. But beware, if we look at the figures of a similar rival, the circle may get even bigger.

The spectacular figures of ‘Adopt Me!’

In the middle of a pandemic, and living one of its sweetest moments, ‘Fortnite’ closed last June one of its best months harvesting 80.4 million users monthly assets. The 64 million users of ‘Adopt Me!’, on the other hand, they are from last January, and are 30 million more than they had in January 2020.

But let’s go a step further because, unlike ‘Fortnite’, ‘Adopt Me!’ it is not a game per se. It is actually just one of the thousands of experiences that we can find in ‘Roblox’, the game creation platform that aims to become the next Disney.

There, along with other experiences that are responsible for adapting other successes transforming ‘Rocket League’ into a social football game, or ‘Among Us’ into a game of hide and seek with a killer pig as the protagonist, ‘Adopt Me!’ has become a workhorse capable of generating more than 50 million dollars a year in micropayments – of which Roblox “stays” close to 75% -, and congregate up to almost two million simultaneous users.

From Dreamcraft, the developer behind ‘Adopt Me!’, they carry that last milestone with pride -not every day a similar record is achieved-, but the truth is that the ‘Roblox’ community went into a rage when they alone took down the game servers with the expectation generated by one of their latest updates .

A game capable of hitting a gaming platform. Or viewed in another way, as if a video had enough callout effect to knock YouTube down. I’ll tell you more, remember the bombardment we got with the Baby Shark song? The famous YouTube video has amassed 8,000 million views, but the page of ‘Adopt Me!’ within ‘Roblox’ it has already exceeded 20,000 million visits.

Where does the biggest ‘Roblox’ phenomenon come from

The evolution of ‘Adopt Me!’ Since its launch in mid-2017, it has been another monumental bombshell, and not only because of the number of users it has managed to drag over time. Behind the idea are two friends who, after years playing ‘Roblox’, decided to try their luck and create their own game on the platform.

The concept would come to be like a infantilized version of the role-playing game that is mounted in titles such as ‘GTA Online’ or ‘Minecraft’ by the hand of its own servers or initiatives such as Marbella Vice. In this case, when you entered you chose whether you wanted to be a father or a son, and the game placed you in that role inviting you to start a family.

Halfway between ‘The Sims’ and a disturbing Tamagotchi, if you were a parent you were assigned a child to watch over based on care such as food, cleaning, entertainment … And as the main objective, by completing tasks you would earn bucks, the currency of the game with which to acquire items to personalize the experience by decorating your house, buying cucamonadas for your avatar or even getting a vehicle to take your family to the park or the beach.

The classic role-playing social life simulator in a safe environment full of children – and thousands of employees from ‘Roblox’ monitoring that the control and censorship software does not miss any savagery in the form of harassment or worse problems.

So far so good. One more experience of the many that you can find on the platform. But a year after its launch the team behind ‘Adopt Me!’ decides to go one step further. Now, in addition to children, you can also adopt and care for your own pets.

Taking care of a baby – who is actually another ‘Roblox’ player – is much less striking than having a puppy dog ​​to take from here to there. Much less than, for example, that that dog is actually a pink unicorn with wings that you can ride on to walk through the scenes of the city of ‘Adopt Me!’ raising envies and passions.

And here is the jewel in the crown of the game. What was once a virtual role-playing game, today is a social hub where you can show off your latest acquisition or trade pets to complete the game’s most exclusive collection of critters. And right there, too, is the key to the financial success of ‘Adopt Me!’.

Although the basic actions of the game deliver virtual money and every so often they give you another handful of tickets, to reach all the most expensive items in ‘Adopt Me!’ sooner or later it’s time to go to the checkout and invest in Robux (there are even gift cards available on Amazon), the currency of ‘Roblox’ that you can then exchange for objects or coins typical of each experience such as the aforementioned bucks.

Based on acquiring eggs of different categories, from the most basic to the legendary, the possibility of getting the pet you want is more or less high. And if you also want to apply improvements to have your own flying bug with which to go from here to there, then you also have to go to the checkout or ask the Mouse Perez to leave you a good stash of Robux under the pillow.

Weekly updates, commercial actions with characters like Scooby Doo and animals that shine, have turned the city of ‘Adopt Me!’ in a street market in which adults and children exchange virtual bugs as if it were a consumerist ‘Pokémon’. 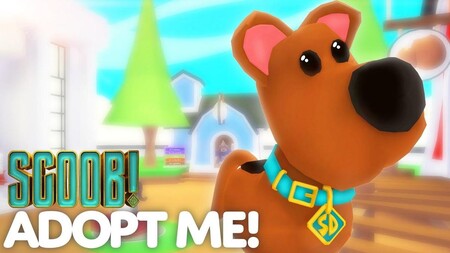 The average gamer has to cross his fingers, knead a lot of virtual pasta or invest real euros to fulfill his dream of adopting a skeleton tyrannosaurus that glows in the dark. Whatever it is to be able to collect them all or get the one that the youtuber on duty has seen.

The fish that bites its tail

Anyone who has spent a good handful of years in the social marcianadas of the internet will remember ideas like ‘Second Life’, ‘Habbo Hotel’ or ‘Club Penguin’ with more or less affection, and it will not take long to establish certain similarities between these and success that occupies us.

Although some of them are still alive in one way or another, either through official channels or through community-supported projects, none of them can come close to the figures generated by ‘Adopt Me!’. In fact, the highest known peak in the case of ‘Second Life’ is reduced to one million monthly users back in 2013.

What did those do wrong or what has done very well ‘Adopt Me!’? Well, it seems that it is one of those cases in which being in the right place and the right moment makes the difference. In addition to the umbrella of a Roblox Corporation big enough to go public a few months ago, the adoption of puppies and dinosaurs has been born in the age of YouTube and Twitch. Add childish content to that mix and you have all the fish sold.

‘Roblox’ attracts users, ‘Adopt Me!’ It builds loyalty, and content creators look to this incipient growth to embrace the idea, thus bringing even more users to the platform and closing the circle.

A pastel colored uroboro and LEGO head from Hacendado. The classic tail-biting fish that not only fattens the accounts of the platform and the game, but also the youtubers and streamers that are lagging behind.

Today, unlike then, we have cases like Megan Letter, known as Roblox queen that in 2018 he barely made 400 dollars a month thanks to his videos of ‘The Sims’ on YouTube and that, with the jump to the gaming platform, he is on track to reap more than 8 million dollars in 2021.

And so, speaking of millions of dollars and a bulk of users that exceeds the total population of Spain, suddenly I have a crazy desire to create a game in ‘Roblox’, or to create content about ‘Adopt Me!’. Or even both, as we are.