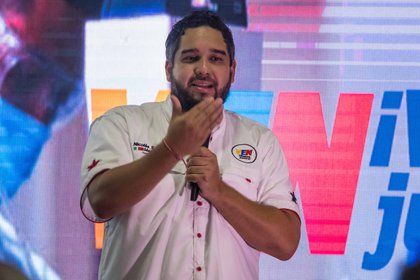 Caracas, Nov 17 . .- The elections to renew the Parliament of Venezuela, rejected by a large part of the opposition, will have more than 14,000 candidates, according to the electoral referee. But some of these candidates stand out more for their unusual origins and anecdotes from the past than for their legislative proposals.
Although the list of those who could be considered as extravagant candidates far exceeds twenty, there are three that take the lead in this section: Nicolás Maduro Guerra, the son of the Venezuelan president, Nicolás Maduro, and the television presenters Juan Eleazar Figallo and Winston Vallenilla.
“NICOLASITO” MATURO, A HEIR?
The economist Nicolás Maduro Guerra is best known, for now, for his radical statements and for having danced under a rain of bills during a wedding in 2015, when the Venezuelan crisis was beginning to take shape.
Many also remember that, in 2017, he threatened the United States with a forceful military response if Venezuela were to be invaded by the Administration of President Donald Trump.
“If the alleged denial of tainting the national soil were given, the rifles would reach New York, Mr. Trump, we would take the White House, (because) even Vietnam would remain small,” he said in a session of the controversial National Constituent Assembly, of which is a member.
But in his race for a seat in Parliament for the coastal state of La Guaira, Maduro Guerra is trying to leave this image behind and presents himself as the candidate of youth and science, an area in which his country, believes, has room for improvement.
Thus, this young man who many see as a political “heir” of his father, has proposed a university for technology in this region, which lives from its port and tourism, but has also suggested the creation of laws to support entrepreneurs local.
At 30, he already has experience in public administration, although always at the hands of his father, who has been accused of nepotism for assigning him positions without competition.
The first of these appointments, when the young man was only 24 years old, made him head of the Corps of Special Inspectors of the Presidency of the Republic, a body created to multiply the supervisory eyes of the Government.
Later, he was coordinator of the National Film School and played an important role in the Youth of the United Socialist Party of Venezuela, also presided over by his father.
“JUANCHO”, THE SOLIDARITY
He was once considered one of the most restrained journalists in the country, but now news anchor Juan Eleazar Figallo hosts the television program “El Solidario,” on the private and Chavista-style television Globovisión, where stridency is the key.
“Until when?” He shouts during a section of the morning show, while reading dozens of complaints on the air about the Venezuelan crisis.
“‘El Solidario’ took me to town, it was like an attraction (…), I define it that way, as a crush on the town,” the man told Efe in the middle of a publicity break in his Monday program.
That “infatuation”, as he calls it, led him to opt for a position in Parliament for the Petare municipality, in the state of Miranda, but which is part of the Caracas conurbation and where the largest favela in the country has a seat.
Your party? That of the evangelical pastor and exaspiring to the presidency Javier Bertucci, a man whom he described as “loved.”
He considers himself an “unusual” candidate, acknowledging his little experience in politics. But also as a “people”, a fact that leads him to take positions far from the creed of his party.
As a candidate for an evangelical party, Figallo rejects abortion and declares that he believes “in life above all else,” but he does leave the door open to discuss equal marriage.
“In matters of sexuality I am totally and absolutely respectful of the sexual diversity and sexual orientation of each and every one of the people,” he says. “I would support a law for equal marriage, they are my brothers, they are my sisters, with the same rights that I can have and in that sense I fully support them,” he adds.
THE OPPOSITOR WHO PUT THE “KNEE ON THE GROUND”
As a soap opera actor and entertainer, the Chavismo candidate for the state of Miranda Winston Vallenilla made a career in the main television channels of Venezuela, where he found fame and fortune.
In one of them, RCTV, which closed in 2007 when the government of Hugo Chávez (1999-2013) did not renew its operating concession, met his wife and remained in the retina of Venezuelans as an opponent, criticizing the management of the then Venezuelan president.
But six years later, Vallenilla encouraged an event for Chávez’s fourth electoral victory and declared that he was “on the ground” with the president, earning the immediate rejection of opponents for such a radical turn.
Before, he was best known for the phrase “family”, which he exclaimed before starting each edition of a defunct game show.
At that time, his fame grew to such an extent that he became jealous of his privacy, a fact for which he came to be considered “arrogant”.
He has already tried to obtain a popularly elected position, when he opted for a Caracas mayoralty in the 2013 municipalities, which he lost by obtaining less than 20% of the votes.
Now, the multifaceted artist is more of an executive, and until recently he presided over public television TVES, where he animated a Saturday magazine and starred in a soap opera with his wife, also the artist Marlene de Andrade, who is now the head of the plant.
Ron Gonzalez