The clots in the arteries, known as arterial thrombosis, are the most common cause of strokes or ischemic stroke. Specialists from the United Kingdom have registered for the first time three cases of this type of stroke in young adults who received the Oxford-AstraZeneca vaccine (Vaxzevria) against covid-19. The results are published in the Journal of Neurology Neurosurgery & Psychiatry.

So far, rare cases of blood clots have been reported after administration of this vaccine, but these have affected the veins of the brain. Also, people who suffered from this unusual form of stroke – known as cerebral venous sinus thrombosis– they also had a low count of platelets (thrombocytopenia) and antibodies against platelet factor 4 (anti-PF4), proteins that help form clots.

In the new study, ischemic stroke is associated with blockages of the large arteries (both the carotid and the middle cerebral artery) and two patients also had a venous thrombosis that affected the portal and cerebral venous systems. The three cases reported by the authors, experts from the University College London (UCL), had extremely low platelet counts, confirmed anti-PF4 antibodies, and elevated D-dimer (related to clotting).

The first patient, a 30-year-old woman, experienced a headache intermittent on the right side and around the eyes six days after vaccination. Five days later, she woke up sleepy and with weakness in her left face, arm, and leg.

Imaging revealed an obstruction of the right middle cerebral artery with cerebral infarction, and blood clots in the right portal vein thrombosis. She underwent brain surgery to reduce the pressure in the skull, the extraction and replacement of plasma and the administration of the anticoagulant drug fondaparinux, but unfortunately passed away.

The second patient, a woman in her 30s, developed a headache, confusion, weakness in the left arm, and loss of vision on the left side 12 days after receiving the vaccine.

The images showed blockages in several vessels, including both the carotid arteries (the main blood supply to the hemispheres of the brain), the arteries supplying the heart and lungs (pulmonary embolism), and the left transverse sinus (one of the cerebral venous sinuses. ). His platelet count increased after plasma collection and replacement and intravenous corticosteroids. Fondaparinux was administered and improved.

The third patient, a man in his 40s, presented three weeks after receiving the vaccine with problems speaking and understanding language (dysphasia). The images showed a clot in the left middle cerebral artery, but there was no evidence of clots in the cerebral venous sinuses. He received a platelet and plasma transfusion, and fondaparinux, and remains stable.

These findings do not change the fact that the benefits of vaccination against COVID-19 continue to far outweigh the very small risk of thrombosis (approximately 1 in 100,000).

“These findings should alert physicians to rapidly test for platelets and blood clotting activity in people who suffer an ischemic stroke in the weeks following vaccination,” he explains to SINC. David werring, lead author and specialist at UCL’s Queen Square Neurology Institute.

“However, this does not change the fact that the benefits of vaccination against COVID-19 continue to far outweigh the very small risk of thrombosis (approximately 1 in 100,000),” adds Werring, who points out that there are still no known cases observed of this type of stroke with other vaccines. 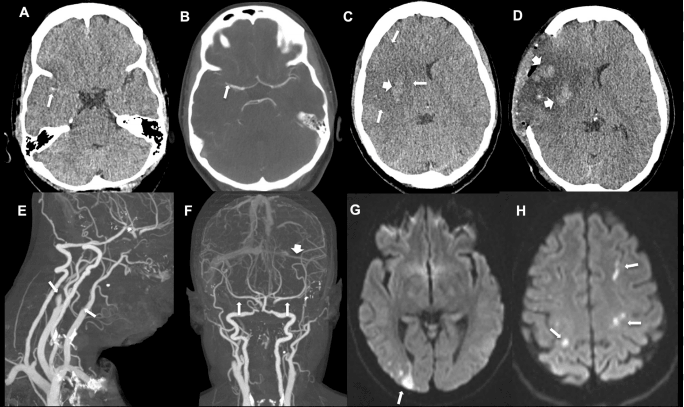 Patient 1: (AD) CT without enhancement (A) shows a hyperdense clot in the right distal M1 segment (arrow), corresponding to the site of occlusion demonstrated on CT angiography (B, arrow). CT without magnification at the basal ganglia level (C) shows a large acute infarction of the right middle cerebral artery with loss of differentiation between gray and white matter (arrows) and early hemorrhagic transformation (short arrow). An unenhanced CT after an emergency craniectomy (D) demonstrates right hemisphere inflammation and the extent of the hemorrhagic transformation (short arrows). Patient 2: (EH) the extracranial CT angiogram (E) shows occlusion of both internal carotid arteries (arrows), the right one occluded from its postbulbar portion and the left one at its origin. Intracranial CT angiography (F) shows bilaterally patent middle cerebral arteries (arrows). There is also a lack of filling of the middle and distal portions of the left transverse sinus (short arrow), suspicious for a thrombosis, later confirmed with a specific CT venogram. Diffusion-weighted magnetic resonance images (G, H) reveal several acute infarcts in the right occipital lobe (arrow in G) and in the semioval center bilaterally (arrows in H). / J Neurol Neurosurg Psychiatry

In a related article, Hugh markus, from the Department of Clinical Neurosciences at the University of Cambridge (UK), stresses that “immune-mediated coagulopathy can also cause arterial thrombosis, including ischemic stroke. Although venous thrombosis and, especially, cerebral venous sinus thrombosis seem more frequent ”.

“During the current period of vaccination against covid-19, a high degree of care is required to identify subsequent thrombotic episodes. However, it is important to remember that these side effects are rare, and much less frequent than cerebral venous thrombosis and ischemic stroke associated with the covid-19 infection itself, “he concludes.