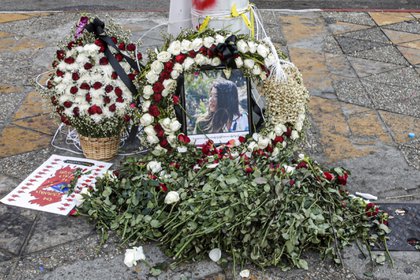 Yangon (Burma), Feb 21 . .- Thousands of people took to the streets of the city of Mandalay this Sunday, where yesterday two protesters were killed by police shots during a protest against the military junta that took power through a coup on February 1.
Carrying banners rejecting the military regime, the protesters took some of the central streets of the city, in protest against the coup and against the police violence that yesterday cost the lives of two people and left at least six gunshot wounded.
Both deaths had come to support striking shipyard workers for joining the protest movement and whom the authorities wanted to force to work.
Witnesses said that the police suppressed Saturday’s protest with live ammunition and rubber bullets, tear gas bombs, and metal projectiles made of screws and launched with slingshots.
With the two deaths on Saturday, there are already three deaths due to police repression in the protests against the military, after confirming on Friday the death of Mya Thwe Thwe Khine, a 20-year-old girl who died of a police shot in a protest, and whose funeral is held today in the capital, Naipyidó.
The image of the young woman, who spent ten days in critical condition before losing her life, has become a symbol of the protests, which maintain their vigor in the main cities of the country despite the violence and the high number of arrests ( 569 from the beginning of the coup according to the Association for Assistance to Political Prisoners).
One of the latest detainees is the famous actor Lu Min, arrested last night for his support of the protests against the coup, as confirmed by his wife on his Facebook profile.
Khin Sabai Oo recounted between sobs in a video posted on her husband’s official Facebook profile that several policemen broke into his home in Rangoon forcing the door and took him away, without specifying where.
Mu Lin, who has taken part in several protests in Rangoon, was one of six celebrities wanted by the Army since Wednesday for breaking the anti-incitement law, encouraging officials to participate in demonstrations, and may face a penalty of up to two years in prison.
The Army justified the seizure of power by alleged electoral fraud in the elections last November in which the National League for Democracy, the party led by Aung Sang Suu Kyi, swept, as it did in 2015.