A fire in the sky Smoke on the water (Machine Head, Deep Purple 1973)

Studies carried out by means of models using the most sophisticated test patterns with the help of the most advanced artificial intelligence, ground tests with hundreds of volunteers subjected to countless tests and analyzes. And despite all this, when you are the first human being to enter a hibernation chamber for a trip that will last more than two hundred years, the moment you close your eyes when listening to the sound of the refrigeration systems, you do with the resigned conviction that you will not reopen them. And in any case at that precise moment you are finally aware that you are undertaking a journey to a future in which no one you know is going to remain alive and probably the civilization and the way of life on Earth that you leave when you climb the ship is not going to be the same either. And then a few subjective moments later is when you open your eyes and clearly hear the beat of your heart.

The capsule opens slowly, it seems that the mechanisms have survived without problems according to the forecasts with faint sounds of protest against inactivity. Then it is the joints and muscles that quietly protest with pain and weakness after prolonged sleep. The injections are activated automatically to awaken the biological envelope of my consciousness, waiting to look at the ceiling as part of it travels to earth wondering what happened to the planet where it had seen the light for the first time. Then once sitting in the capsule and breathing rhythmically I find myself drawing a smile remembering the clandestine object that I had managed to keep together with the medical material. I have at hand a bottle of rum over two hundred years old. I need ice.

One of the most important achievements that car manufacturers have to achieve to succeed in the market is to find the perfect combination between size and price that the consumer demands, but also with practical technological solutions so that this perfect combination is also practical. The French manufacturer Citröen is one of the manufacturers that has best kept this balance with a special focus on the technological advances that it has been bringing to the automotive world since that first Traction Avant in 1934, which for the first time provided solutions such as front-wheel drive or bodywork. aerodynamics. 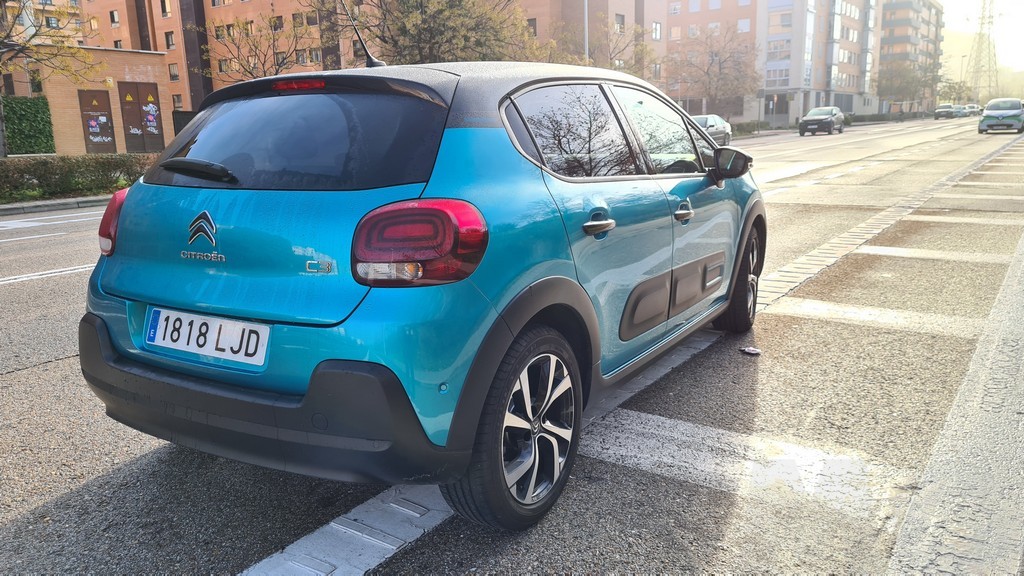 The launch of the C3 model in 2001 with a design inspired by the legendary 2CV was an important step on the part of the French house to establish its presence in the B segment of the automobile market. On this occasion we have been able to test this year’s version of the Citröen C3 in its 110-horsepower gasoline engine with six-speed PSA group automatic transmission, a car with a mainly urban vocation and design.

It is a model that has received slight aesthetic touch-ups and customization options with respect to the model launched by the French house in 2017. Among the touches that we can find with respect to the previous generation, the front part in which they have been changed stands out. design both the bumper and the headlights as well as the double grill itself with the air intakes. In addition, the hood is higher giving the Citröen model more SUV appearance. 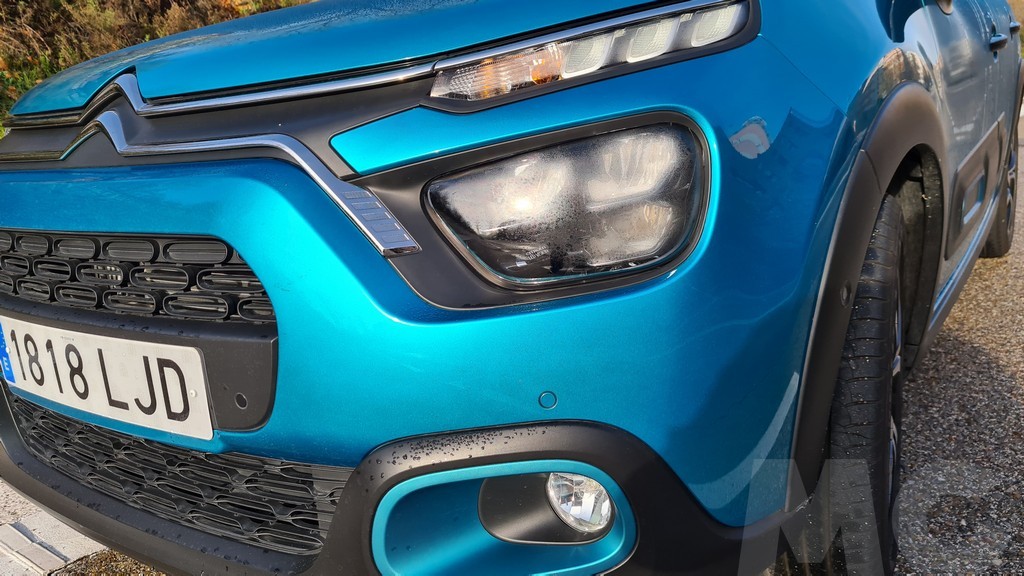 The brand logo in the center of the front extends to the sides and the fog lamps are surrounded by a frame in the body color that makes them stand out. The profile of this new C · is almost identical to that of the previous generation, while on the sides we find the characteristic three-block plastic fenders that have characterized the manufacturer’s models in recent times. The tailgate decoration with large light clusters on the sides and the brand logo clearly visible in the center.

Other touches in the design are the new wheels and especially the possibilities for customizing the bodywork that allows combinations in two colors and that add up to 97 possible combinations depending on the brand. In this way we have more possibilities combining these options that our car is something less common. This color scheme also affects the first bumper and other elements of the car.

Inside we find a lot of space for a car that does not reach four meters, with good visibility and light inside thanks to the large glass surfaces. As in other Citröen models, the interior has finishes tending to Spartan in which practicality prevails but which transmit personality thanks to the moldings, from which we can choose the color, and original elements such as the relief of the door padding or the fabric pulls. 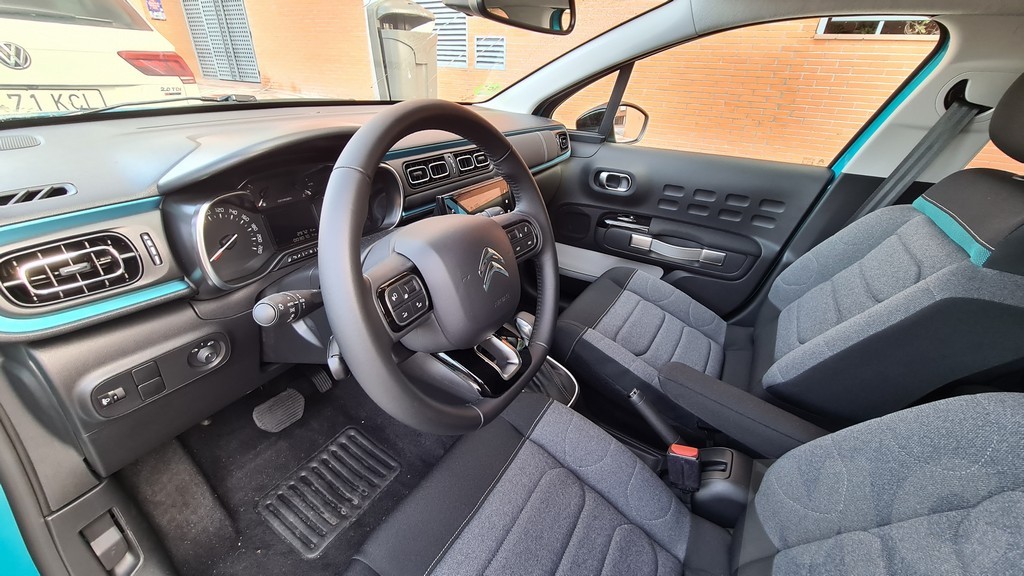 The seats are comfortable and with a pleasant touch, like the ones we tested in the C4 Cactus and C5 Aircross: good padding and a design that, although not particularly sporty, does hold enough to drive comfortably through curves thanks to the side supports. The driving position is also comfortable and has all the controls at hand although the steering wheel has seemed somewhat bulky in its central part.

Behind the wheel we find the traditional dials to indicate both the engine’s rpm and speed. It has two independent indicators for the water temperature and the fuel level in the tank. In the center a digital display shows additional information. A somewhat outdated system with respect to the screens that the competition usually mount, more colorful but that do not really contribute much from a practical point of view.

Screen at the bottom

The screen of the infotainment system, unlike the aforementioned C4 Cactus and C5, is located lower, which as we have already pointed out on several occasions is not ideal to avoid looking away from the road. The operation of the system functions is carried out through the screen and the touch buttons that light up on the sides of the same to access the main functions. The quality of the image is good although the response in some cases somewhat slow. 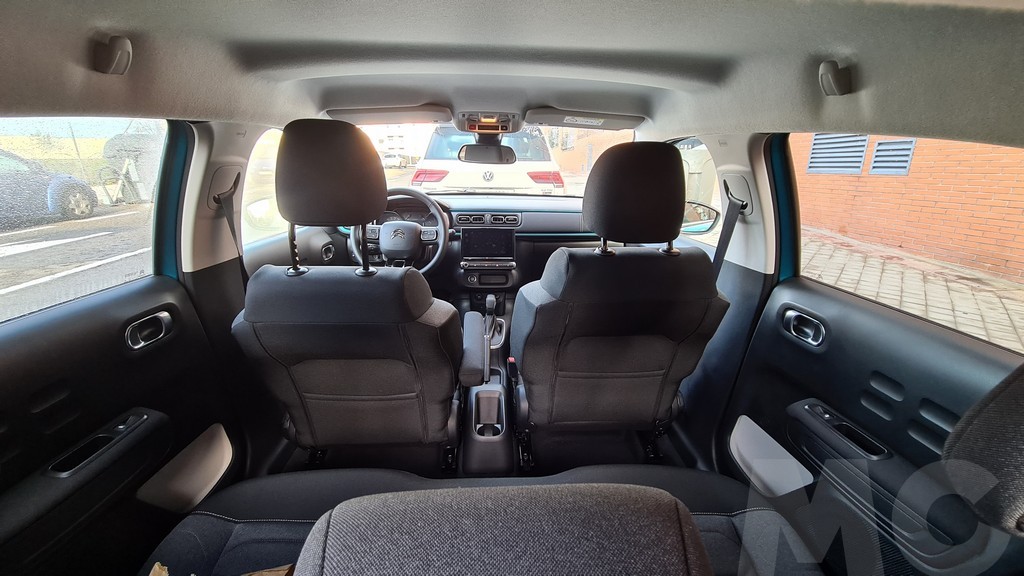 Where the C4 stands out for a car of its price and category is the number of both active and passive driving assistance systems that can be incorporated, some of them through options. We can equip proximity sensors for parking, automatic braking system with pedestrian recognition, driver attention alert, automatically deactivatable high beams, lane departure alert, signal recognition that can work in conjunction with the speed limiter …

The rear is not particularly wide and does not allow (as usual) three passengers to travel comfortably. However, there is good legroom even for the occupant of the central seat and the seat is very comfortable both due to the padding and the feel of the fabric, as was the case with the front seats. The occupants of these seats do not have a ventilation outlet or charging connectors as we can find in other models.

The trunk of this C3 has a capacity of 300 liters which is somewhat short if we need to transport many objects or make a trip of several days. In addition, to reach the loading surface, a step in the body must be crossed and the loading mouth is not too wide. We can increase the capacity as usual by folding down the seats, which achieves 922 liters that can come in handy when necessary. The process to achieve this is simple. 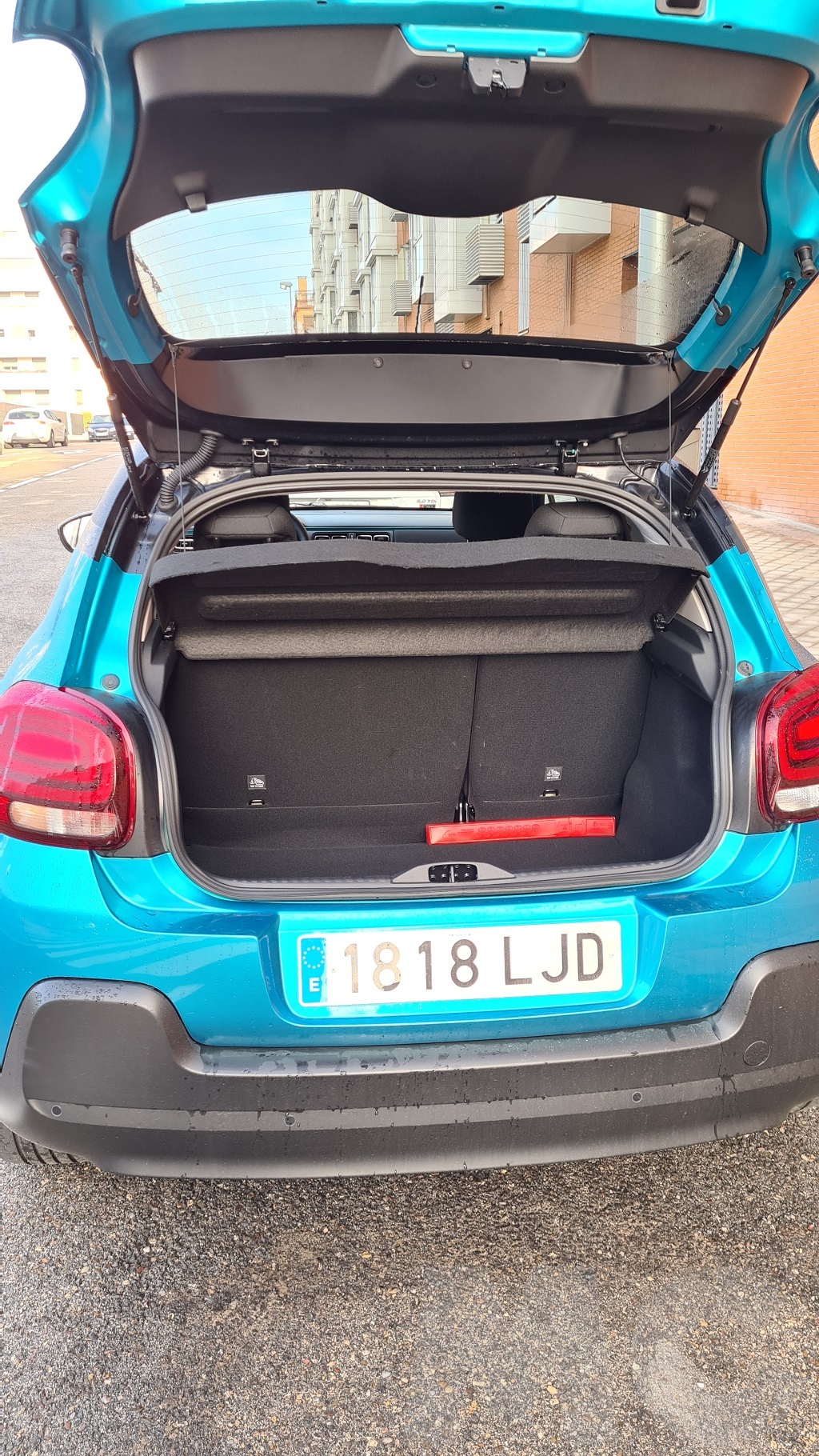 The version of the C3 that we were able to test was equipped with a 110-horsepower three-cylinder petrol engine with an automatic transmission of a six-speed torque converter. The truth is that despite being a three-cylinder, it has not seemed particularly noisy even when we have revolutionized it on slopes or to get power in overtaking, surely due to the good work in the soundproofing of the cabin by Citröen.

The 110 horses move the C3 with enough ease, especially if it is not too loaded. The automatic transmission system runs smoothly and responds fairly quickly in urban driving but lacks some response on the road if we need power immediately. In return for our extra-urban routes, the car has been really comfortable when we face kilometers on easy-going roads or on the highway. Even on bumpier terrain the excellent suspension maintains ride comfort. 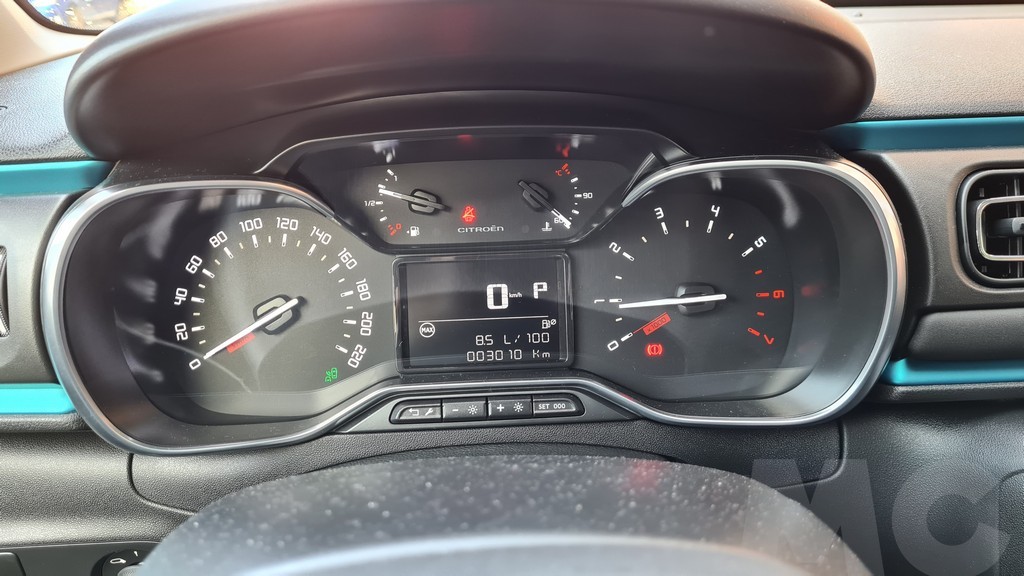 It is one of the characteristics that we liked the most about the car: its general road comfort. As for the sportier response once we’ve gotten our hands on the quirks of the rather well-designed gearbox for urban environments, it’s possible to drive fast and the 205 Nm of maximum torque allows for some fairly quick but not exciting joys and paces. The stability of the car in a curve is very good although it does not invite to seek the limits with a steering that is too soft for these tasks.

Regarding the consumption we have achieved, it must be said that the small French gasoline engine remains quite austere regardless of the driving style, being able to drop below six liters on the road if we take care of the forms a little. Naturally, in the city consumption increases but it is also possible to keep them below six liters if we adopt a more conservative way of driving.

The Citröen C3 has seemed to us mainly a practical car, although it lacks some trunk to be it at all, and above all comfortable with a feeling of comfort well above what would correspond to it for its category. The interior finishes show once again that a balance between practicality and style is possible with an aesthetic that convinces even if the materials are not the most sophisticated. Also noteworthy are the customization possibilities for the body and interior colors. 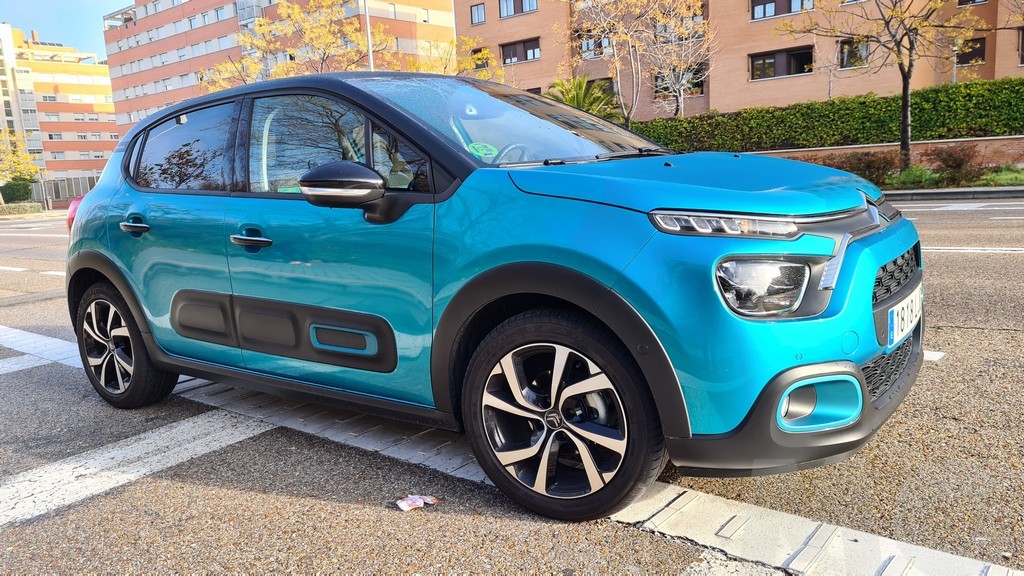 The behavior of the engine and the change is good with special emphasis on the austerity of consumption and an inevitable mention of the good soundproofing work that is not always achieved with this type of three-cylinder engines. In short, it is a car that clearly has an urban vocation but thanks to its ride comfort and good equipment in terms of driving aids, it is not afraid to leave the city.

The Citröen C3 is an eminently practical and urban car that nevertheless has good ride comfort for traveling and contained consumption with its 110 horsepower gasoline engine.