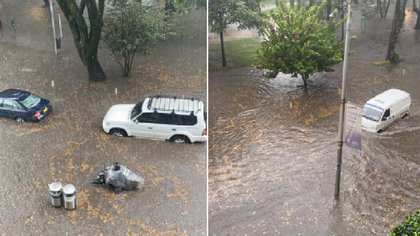 The heavy rains that were registered yesterday in Bogotá caused serious damage in the capital of the country, where neighborhoods and streets were collapsed due to floods and the fall of poles or trees, which put the capital’s residents in trouble.

In the afternoon, the mayor of Bogotá, Claudia López, accompanied by the director of the District Institute for Risk Management and Climate Change (Idiger), Guillermo Escobar, and the director of the Bogotá Fire Department, Diego Moreno, delivered a balance of the situation presented in the capital of the country.

Although the images and videos that circulated through social networks strongly showed the heavy downpours that occurred in Bogotá, the director of the Idiger, Guillermo Escobar, in his statements explained that, yesterday in the city it rained more than normal.

“What we recorded this afternoon was 32.2 millimeters of water in one hour, an amount that represents what could have rained in the previous 24 hours.”Escobar explained.

For her part, the mayor of Bogotá, Claudia López, reminded citizens that, at this time, the greatest threat is climate change and, therefore, asked the people of Bogotá to be more careful in handling and depositing the waste in order to avoid blockages in the sewer, which increase the possibility of flooding.

“The weather tells us again that climate change is real and we have to change our habits. I beg you not to throw a single paper on the street, or take out garbage, which when it is not, this damages the sewers, so it is vital to have a civic culture“Said the local president.

The commander of the Bogota Fire Department, Diego Moreno, agreed with the mayor that the bad habits of Bogota citizens when disposing of waste was the main cause of blockages in the city’s sewers.

Regarding the attention to the emergencies presented yesterday, the commander explained that most of them were managed effectively within a period of two hours.

“The systems that are always prepared for this rainy season have a response in advance thanks to the monitoring“Moreno explained, according to information from FM Radio.

According to the Idiger, the towns that were most affected yesterday by heavy downpours were Barrios Unidos, Teusaquillo, Chapinero, Santa Fe and San Cristóbal.

One of the sectors that was most affected by the rains was Avenida NQS with Calle 68 where the water flooded the streets and homes of that section. In videos published on social networks, it was possible to see how cars and motorcyclists struggled to pass over the river of water that covered almost half of their vehicles.

Due to the road emergency, the Secretariat asked the citizens who were mobilizing in the sector to take alternate roads such as Avenida Ciudad de Cali.

Among the emergencies attended by the Bogotá Fire Department, due to the heavy rains, was the fall of a pole on a taxi in the center of the city, specifically on Circunvalar Avenue with 41st Street.

Videos and images published by Bogota citizens on social networks also showed how the floods affected the north of the city. Specifically, it was evident that in the Viceroy sector, the cars and motorcycles that circulated in the area were trapped by the water that surrounded them.

Other videos also showed how the Viceroy channel overflowed, “It is not the Amazon River, it is the Virrey Park, Bogotá.”, Said a citizen through Twitter.

Overflow of the Viceroy canal in Bogotá.

Regarding these heavy rains that occurred in Bogotá and throughout the country, the Institute of Hydrology, Meteorology and Environmental Studies (Ideam), reported yesterday that The phenomenon of ‘La Niña’ will intensify on the 20th, 21st and 22nd of the month, so increased rains are expected in the Andean and Caribbean region, which is expected to be accompanied by electrical storms and strong winds..

Fausto Newall appeared, the fisherman they were looking for in Providencia

Ideam warned of increased rainfall for the remainder of November