The Meridiani Planum is a Martian equatorial plain located west of the Sinus Meridiani. In 2004, Opportunity landed at the site to study something that had intrigued scientists for many years: hematite. On Earth, this iron oxide appears almost exclusively associated with liquid water. And, of course, the question was obvious What were (disproportionate amounts of) hematites like you doing in a (so extremely dry) place like Mars?

However, most of us do not know the Meridiani Planum for that, but for something much more prosaic: it is one of the huge plains that Mark Watney (Matt Damon) had to traverse in the film ‘The Martian’. The only problem is that, obviously, the images in the film were not taken on Mars, but in Wadi Rum (Jordan) where Lawrence of Arabia set up one of his base camps. Fortunately, we have more ways to see the mighty landscapes of the Martian equator.

Mars and much more in 8k

Seán Doran is already an old acquaintance of all of us who have a passion for space. Researcher from NASA and ESA, on his YouTube channel he has true multimedia gems in which he uses (and squeezes) open images of different space projects. In the case at hand, they are HiRISE images, the chamber of NASA’s Mars Reconnaissance Orbiter and cover approximately one kilometer of the Martian surface.

But there is much more: the sun, sandstorms or the fires of Australia are some of his latest videos, but as I said he has real wonders. It never hurts to spend some time to surprise us with the beauty of the Earth, the Solar System and the depth of Space.

The itinerary of ‘El Marciano’ 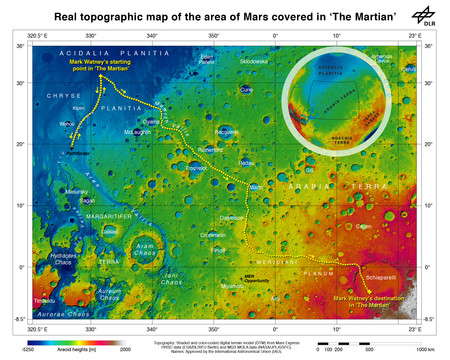 Route of ‘The Martian’ through Meridiani Planun

In case you have any doubts about what exactly was the itinerary that Mark Watney “followed” in the book and the film, I leave you the top infographic. It is very useful to understand topographically the challenges of the trip and, above all, to rejoice in the scientific accuracy with which Andy Weir delighted us in this (almost) classic of harsh science fiction.

A new trip to Mars

For a few weeks, Mars has had a “new inhabitant”: the Rover Perseverance. On February 18, the rover managed to land on Martian soil, where it has already got down to work and from where it has sent us some new high-resolution images. We still do not have videos in 8K, but Seán Doran himself has uploaded a clip of half an hour with 4K images that are not wasted.