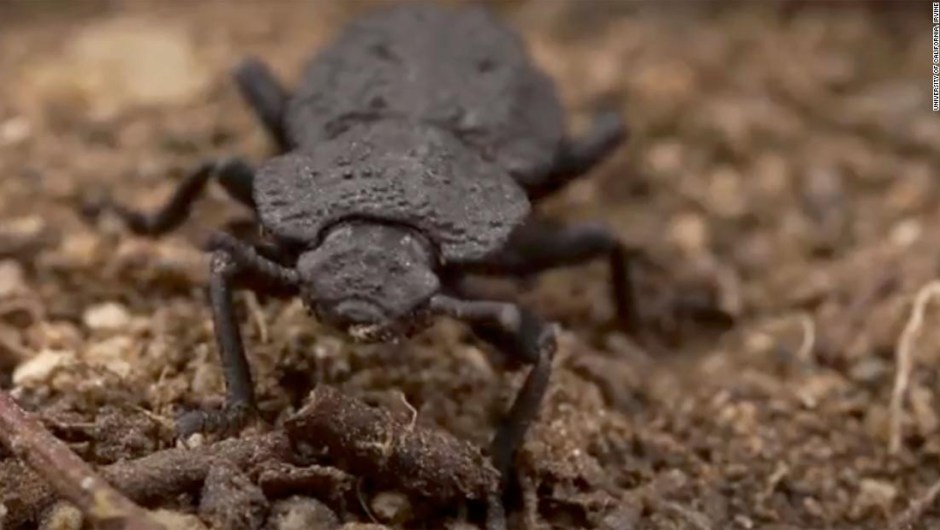 (CNN) – Scientists developing new materials are studying a rare source of force: a beetle that can withstand being driven over by a car.

Researchers from Purdue University and the University of California, Irvine, studied the aptly named diabolical armored beetle – Phloeodes diabolicus – to understand the secret behind its strength.

“If you take any beetle and want to collapse it with your finger, you can probably kill it,” Pablo D. Zavattieri, a professor of civil engineering at Purdue and author of the study, told CNN.

But the same is not the case with the diabolical armored beetle.

“This beetle is so hard that the energy or strength you can do with your hand is not enough, it is like a piece of rock,” he said. “The tire of a car is not enough to crush it.”

The findings were published in the journal Nature on Wednesday.

The science behind the super beetle

Experts wanted to understand why it is so tough, hoping to recreate such strength in building materials.

Using advanced microscopy, spectroscopy, and in situ mechanical testing, the researchers identified the architectural designs within the creature’s exoskeleton.

Scientists discovered that the devilish armored beetle’s super-resistance resides in its armor. The insect has two armor-like “elytrons” – used by flying beetles to spread their wings – that are joined in a line, called a suture, that runs through the entire abdomen. 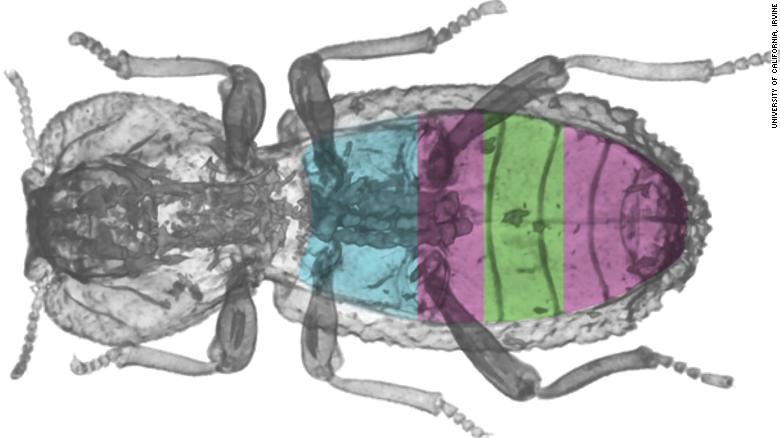 A CT scan of the diabolical armored beetle shows how its organs are spaced beneath a super-tough exoskeleton.

Millions of years ago, most beetles flew, Zavattieri explained. “This particular beetle, as part of the evolutionary process, no longer flies,” he said.

Although the diabolical armored beetle does not use its elyton to fly, the elytra and connecting suture help distribute applied force more evenly throughout the insect’s body.

Zavattieri explained that the suture acts like a puzzle, connecting the creature’s various exoskeletal blades in the abdomen, which are locked to prevent them from coming out.

If the suture breaks, another protective mechanism also allows the blades to slowly deform. That prevents a sudden release of energy, which would otherwise break the beetle’s neck.

Using steel plates, the team of researchers discovered that the creature can receive an applied force of 150 newtons, about 39,000 times its body weight, before its exoskeleton begins to fracture.

A car tire would apply a force of about 100 newtons if it passed over the insect on a ground surface, the scientists said.

The team hopes that by better understanding how the beetle withstands such a force, they will be able to develop stronger materials.

One of the critical problems in engineering is connecting materials of different compositions, for example connecting aluminum and steel, in fields like aerospace, Zavattieri told CNN.

For example, when building aircraft turbines, metals are often attached to composites with mechanical fasteners, which can add weight, introduce stress, and ultimately lead to structural features and corrosion.

We have the materials. One of the engineering problems is how to connect them, ”said Zavattieri.

“We can use these sutures, they are showing you how the beetle does it, to improve the toughness of these,” he said.

“This is a good example of how nature uses this connection,” he said. “Every time we look at nature, we learn something new.”