Work is already underway on the WiFi standard coming in 2024. Specifically in September three years from now, when the IEEE plans to approve the new 802.11bf Wi-Fi. It is an update that will expand the possibilities of WiFi, allowing not only to transmit the signal but to take advantage of it to detect which people or objects are moving within its range of action.

Wi-Fi 802.11bf cannot be understood without technology ‘Wi-Fi Sensing’ (SENS) associated. The first term is for the standard, whose main novelty is the introduction of this ability to turn WiFi devices into a kind of distance and movement sensors.

What is ‘Wi-Fi Sensing’ 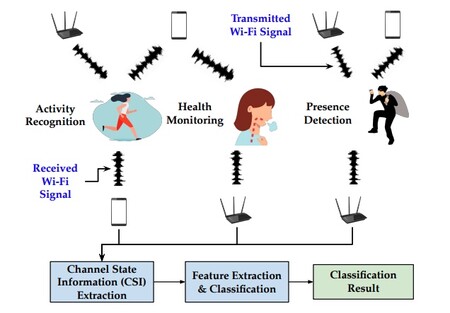 Utilizing differences in WiFi signal interference, SENS is a technology that is capable of measure the range, speed, direction, movement, presence and proximity of people and objects. WiFi devices emit waves throughout the house to send and receive data, but these waves can also be used to identify some parameters of the objects with which these waves interact.

Through The Register we know the work of Francesco Restuccia, assistant professor of electricity and computer engineering at Northeastern University, who explains in an arXiV paper what role the new standard can play: “when it is finalized and introduced 802.11bf as IEEE standard in September 2024, WiFi will no longer be a communication standard only and it will legitimately become a complete detection paradigm. “ 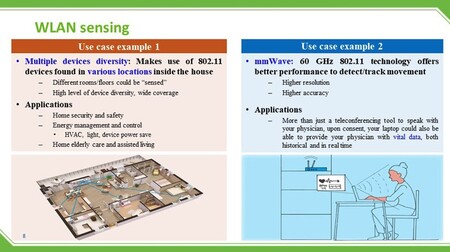 The next expected standard is Wi-Fi 7, based on the IEEE 802.11be ‘Extremely High Throughput’ (EHT) standard and promising at least 30 Gbps at the access point and up to 48 Gbps. Its arrival is also expected in 2024. This Wi-Fi 802.11bf can be understood as a parallel standard, for those future WiFi devices that also activate SENS motion detection.

As described by the IEEE itself, the measurements obtained with the WLAN network will allow a whole series of new applications, both at the level of home security, entertainment and energy management and savings. It is not difficult to imagine for example that smart lights connected to home WiFi can automatically turn off when they detect that no one is home or activate an alarm system when they detect a movement at home even though we are away.

Intel is one of the companies that has described the possibilities of ‘Wi-Fi Sensing’, explaining that it is based on analyzing the channel changes measured by amplitude and phase. This technology can be applied to different frequencies, from 2.4GHz to 60 GHz, going through the 5 and 6 GHz.

The bands targeted by the IEEE are slightly different, explaining that the ‘Wi-Fi SENS’ will be between 1 GHz and 7.125 GHz (MAC / PHY interface) and above 45 GHz, which would fit with the 60 GHz named by Intel. .

The 802.11bf standard will allow remote monitoring through WiFi devices no need for dedicated cameras or sensors. In the assumptions of Wi-Fi 802.11bf in the 60 GHz, the IEEE anticipates that it can be used for the gesture recognition in enhanced remote gaming applications, services, health monitoring, and more.

“In fact, SENS-based classifiers have been shown to can infer information critical to privacysuch as typing, gesture recognition and activity tracking, “the researchers explain.” Given the transmitting nature of the wireless channel, a malicious intruder could easily ‘eavesdrop’ on CSI reports. [Información del estado del canal] and track unauthorized user activity. “

Restuccia suggests that the new standard should have a system of optionality, so that it is the user who voluntarily decides to activate it. However, this ‘Wi-Fi SENS’ has an added complexity compared to other sensors or surveillance cameras. And is that WiFi waves can penetrate walls, so it could be used to invade the privacy of other people without being detected by them. A complexity that we already see in other technologies such as Bluetooth.

We will have to wait until 2024 to know the final details of a new WiFi standard that promises to simplify the configuration and automation in our home, but as almost every time a new technology appears, it will also generate new debates and challenges.

In Engadget | 6GHz WiFi 6E: what is it and what are its advantages?