The PC continues to matter, and Microsoft wanted to take advantage of this unique resurgence with a launch that nobody expected: This is how your new operating system, Windows 11, arrives.

Today we have finally known all the details about an operating system that takes the witness of Windows 10 and that it does so with very important changes at a visual level, but also in other sections. Ladies and gentlemen, welcome to Microsoft’s next-generation operating system.

Important changes to the start menu

Windows 11 wants to look different from Windows 10, and to achieve this Microsoft has introduced a series of visual changes that particularly affect your revamped start menu. 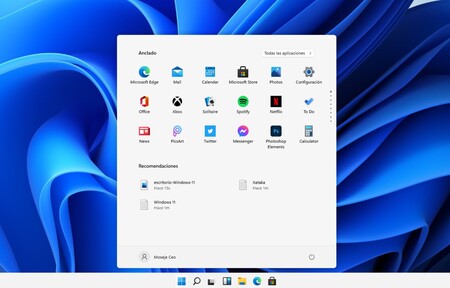 That menu, which for years has been located by default in the lower left corner of the desktop, change position and format. Both the start button with the Windows logo and the accesses to the main applications that we “anchor” to the taskbar are located in the central part of the screen, something that is reminiscent of the position of the macOS Dock and that of course represents a radical change in the Microsoft operating system.

If we don’t like that option, nothing happens: we can change that position by right-clicking on the taskbar, which will allow us to access your settings. In that configuration we have an option to place the start menu and the icons of the applications anchored in the lower left part of our desktop, as always.

Not only that: when you click on that start button, the displayed start menu is also different. First of all “it is not stuck” to the taskbar “, but “floats” on the desk. Second, the corners of that pop-up window do not form 90 ° angles, but rather they are rounded corners. Third, we say goodbye to the animated tiles that have been with us since Windows 8, released in October 2012.

Instead of those tiles, Microsoft has decided to occupy that menu with two different areas. In the upper one we find icons that are launchers of the latest applications. At the bottom we find shortcuts to documents and files that we have accessed and that the system thinks we can use to have there.

The operation of the start menu, yes, inherits the behavior of the Windows 10 built-in search engine: although the search bar does not appear first in that menuAs soon as we start writing something with that menu open, suggestions will be offered that allow us to launch applications or perform searches immediately.

The new multitasking experience also changes in a sensible way: we can continue dragging the windows to the edges and thus placing two windows facing each other, but things go further with so-called Snap Layouts, which allow several windows to be repositioned in different positions in a simple way, thus dividing the desktop into halves, thirds, quarters and also other combinations of sizes.

Those organization options are enhanced with the so-called “Snap Groups”, which allow us to remember configurations of groupings of windows on the desktop to reuse them whenever we want. This experience takes advantage of multiple monitors, which we can connect or disconnect without losing a workflow that adapts to those scenarios.