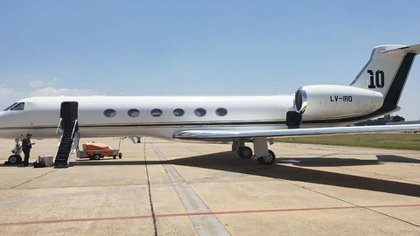 The aircraft has details with direct reference to the Argentine star: the number 10 on the tail and the names of the family on the ladder. These characteristics, however, were modified for protocol use

Alberto Fernández rented Lionel Messi’s private plane to travel to Mexico. The management was in charge of the businessman Gustavo Carmona, who coordinates the utility of the aircraft that the Argentine star acquired in December 2018 for 15 million dollars. The cost of the transfer: 160 thousand dollars for four days of rent. Faced with the need to move with health and personal security, the presidential entourage sat in the seats where the Messi family and their closest friends usually settle. 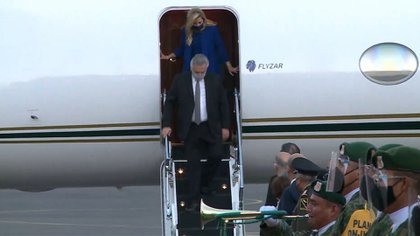 Around 6:50 a.m. local time, the president and the first lady alighted from the aircraft at the Benito Juárez International Airport

Is he Gulfstream V, registration LV-IRQ, manufactured in 2004. It has 16 executive seats that can be transformed into eight beds, it has two bathrooms and it has two kitchens. The aircraft also has details and inscriptions with direct reference to the Rosario soccer player: the number 10 is stamped on the tail of the plane and the names of Antonela, Thiago, Ciro and Mateo are engraved on the stairs that unfold for the ascent and descent of passengers. , alluding to the player’s wife and three children; And as yapa, keep an installed playstation with gold controls. These conditions, however, are modified for flights in which the Messi family does not travel. 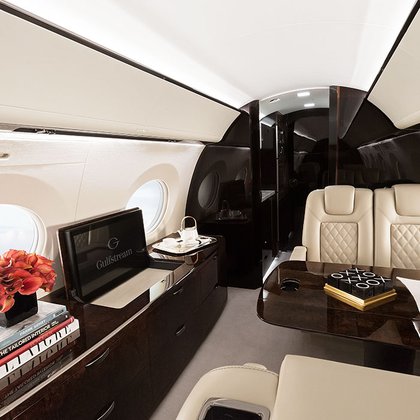 The distinguished interior of the Gulfstream V model

The president reclined comfortably in those seats, together with the first lady Fabiola Yañez, Julio Vitobello -secretary general of the Presidency- and Juan Pablo Biondi, secretary of the Media. They got off the private jet minutes before 10 in the morning Argentine time and they were received at the Benito Juárez International Airport by Marcelo Ebrard, the Foreign Minister of Mexico, and Carlos Tomada, the Argentine ambassador to this country. The president would also have used it when he crossed the Andes Mountains to start a two-day state visit in Chilean territory. On that occasion, he held a meeting with his counterpart, Sebastián Piñera, with businessmen and with ECLAC.

Messi often uses the plane for his personal trips and for his father’s business transfers. He also makes it available to his team mates in each window of the South American Qualifiers: footballers such as Ángel Di María, Leandro Paredes, Sergio Agüero, Nehuén Pérez, Marcos Acuña, Lucas Ocampos, Guido Rodríguez, Rodrigo De Paul and the Uruguayan Luis Suárez, among others. When the Barcelona star doesn’t need it, offered for rent. It was even used by Juan Fernando Quintero when he had to go to Miami to carry out a personal procedure as part of his transfer from River to Shenzhen Kaisa in China. Gustavo Carmona, pilot, president and CEO of Flyzar, is the one who manages it: an aeronautical entrepreneur who owns a fleet of premium aircraft close to Kirchner officials. 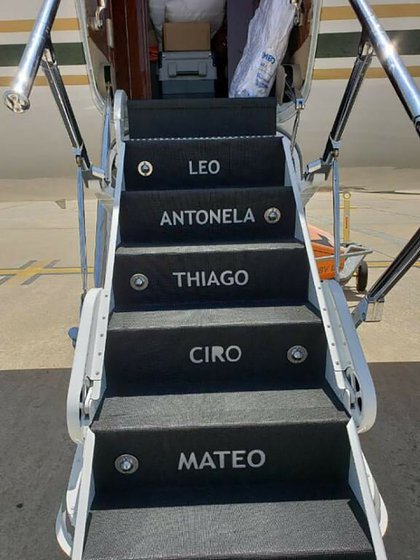 Members of the Messi family marked on the access ladder to the private jet. On the president’s flight these inscriptions were covered up

The Gulftream V is its best piece. Registered under the registration number LV-IRQ, the first version of the model entered service in 1997: since then it has been modernized over time to reach a high level of comfort and performance. The private jet is powered by Rolls Royce engines, reaches a maximum speed of 940 kilometers per hour, at cruising speed it can reach 882 kilometers per hour, and boasts a range that exceeds ten thousand kilometers. The cockpit is equipped with state-of-the-art technology and 14-inch LCD monitors. The aircraft measures 29 meters long, 28 meters wide and eight meters high.

The presidential delegation will stay for at least 60 hours in Mexico City to fulfill the geopolitical desire of the Argentine president to deepen a common strategic agenda with his Mexican counterpart, Andrés Manuel López Obrador. The purpose is to design an institutional model of bilateral relations to incorporate the most important countries in Latin America – Brazil, Paraguay and Uruguay – and the states that have a deep relationship with Mexico for economic and political reasons. 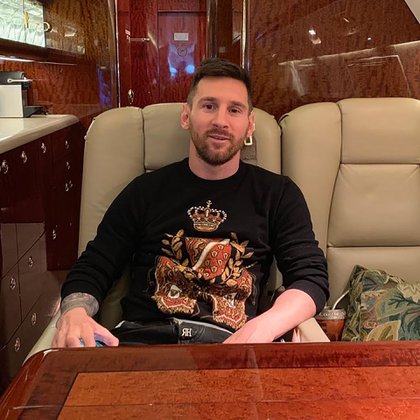 A postcard of Lionel Messi in his modern aircraft

“He is our special guest”: AMLO welcomed Alberto Fernández Alberto Fernández travels to Mexico to deepen with López Obrador a common strategy in Latin America After the VIP vaccination scandal, the Government approved the purchase of 20 million cards to certify who received the dose against COVID-19