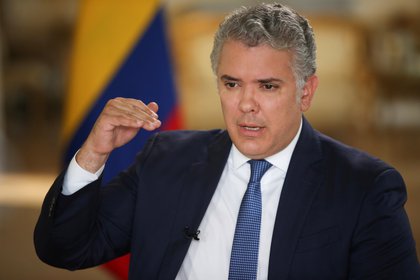 This was announced by the journalist Juan David Laverde in the newspaper El Espectador. In this sense, the rancher and businessman Luis Guillermo Echeverri, former manager of the presidential campaign of Iván Duque, sent a letter to the largest businessmen in the country in which he gives them warnings regarding what will come for the presidential elections of the 2022.

It should be remembered that Echeverri is one of the men closest to Uribe and one of its most important pieces.

In fact, according to information from that medium, Echeverri had made the news throughout the country, as he sent a letter to the newspaper El País in Spain in which he complained about an interview that that newspaper had done with Senator Iván Cepeda.

“I cannot find the explanation to allow Iván Cepeda, master of deception, maker of false testimony, modern inquisitor, leader of the parliamentary guerrilla, to amplify as true the fallacy of which he himself is the intellectual, material author and executioner of human integrity and democratic of one of the most important political leaders in the world, “said the letter.

However, due to this altercation, Echeverri had to withdraw by order of a judge and was also criticized from various political sectors.

Today, a new letter from the rancher, known and made public by the newspaper El Espectador, seems to have political ends. That is why the businessman and rancher has chosen as his main readers Colombian businessmen facing the presidential elections of 2022.

The document, which is dated November 7, is divided into fifteen points on which Echeverri invites us to reflect on the national situation regarding future elections.

The letter begins by saying that “The problem is not the cage but the birds!”

And he reiterates that he makes “a call for the unity of the private sector in order to defend the market economy and freedom of enterprise.” In this sense, that letter is very similar to the one sent by the lawyer to the Spanish newspaper. Luigi Echeverri warns on several occasions that you have to be careful, without saying exactly which one, with various political sectors.

In addition to this, the letter published by Juan David Laverde says that “A veteran said when he looked at the city of Medellín from the mountain: ‘What a beautiful cage, but what birds’. And it is also what can be categorically affirmed when thinking about the oppressive system that enslaves (a) twelve million Cubans or the misery suffered by thirty million Venezuelans, trapped between the chaos of the totalitarian framework derived from narcocommunist populism that dominates the territory that they contain their borders ”.

On the other hand, he adds: “Progress occurs with actions that are based on the execution of well-conceived ideas, on the proper use of the knowledge that we have today thanks to technological convergence, not with ideological criticisms and statements. For Colombia, now is the time to act and develop, without letting a few decide in an anarchic way for the vast majority ”.

The lawyer and rancher does not specify proper names in his text, nor does he give names of parties, however, he sends darts to “those who argue and attack the system only defend individual interests, clientelistic spaces or particular matters.”

In the second point, Echeverri asks himself a question regarding the 2022 elections, “Can an economy survive where laws and rules are created by a corrupt political class and a procurer of an organized crime that thrives on anarchy? Will independent citizens be able to start companies that in turn generate the jobs necessary for families to be able to shop and eat, pay a roof, travel to work and educate their children, under a populist socialist or communist regime?

And he continues to ask himself leading and rhetorical questions “Why do I only see in populist proposals the clear threat of a totalitarianism that, behind the mask of a socialist discourse, gallops into emaciation, the product of the absolute ideological divorce between the mouth, the spoon and food? That is, between employment, business and private investment ”.

And he seems to answer himself in the letter published by the journalist Laverde “Let’s get to work, let’s talk and talk as a family about family, about what is correct and what is not. Let’s talk about the future with freedom and progress. If we do not do it between workers and businessmen, between family and friends, it may happen that we choose to drink the populist hemlock that today controls sister nations that suffer under the yoke of false democratic forms that feed on the embezzlement of public finances, terrorism and the drug business ”.

Another answer and solution to your questions is “It is the moment when each company, each family, each worker who enjoys a stable salary speculates and differentiates between the system that pays the salary and the accounts, and that of those who go to the populist speech alluding to social justice, but that they are not able to explain with what income the State will pay the voucher of all citizens ”.

In the fifth point of the letter, according to the information presented by Juan David Laverde, he seems to constantly defend President Duque: “Colombia today has a great president. A cultured leader is in command of the country who neither says nor does stupid things; he is honest, intelligent, hard-working, dignified, respectful, he has character without showing off about it and he is little given to the abuses of power that we already live ”, he affirms.

In fact, this is why he asks to surround the president and accompany him in his administration. “We have the obligation of the country to help the president to build in the midst of the difficulties we are experiencing. Superman only exists in the movies. But we have a very good president and his success or failure is everyone’s. Let’s put patronage and the disease of power aside for a moment and get to work without speculating ”.

In addition to this, the lawyer and rancher warns about the danger of socialism and of various sectors of the country.

Well, he asks people that “It is time to stop blaming Uribe for everything that happens in the country. How much does that contribute? It is our responsibility as the ruling class not to let the future be denied to so many young people in Colombia, as happened in Venezuela, and it is something that is in our hands. ”

He even adds that “Let’s not neglect colleges and universities.”

Finally, along these lines, point six of the letter presented by the newspaper El Espectador and Juan David Laverde, says that “Colombian democracy cannot afford to question the legitimacy of the Government.”

Echeverri continues to propose a vision of his country and that he wants to make Colombian businessmen see, since he says “there is no doubt. The hardworking and honest country has a legitimate president. It is our duty to support the government in its egalitarian battle to create a culture of legality amid the most difficult time our civilization has had since the economic depression. ”

It even rescues the fundamental role of the Colombian business community as it says that “We businessmen who create formal and dignified jobs cannot leave the destiny of the country in the hands of a few who, by profession exclusively politicians.”

And he continues to attack a political sector without giving proper names or names of parties, since he adds that these “in the midst of their individualism and condition of fending off with anarchy, are prisoners of the intellectual degeneration produced by the fact that they have everything delivered easy in life ”.

He also adds that “It cannot pass for normal that someone who holds a dignity uses his position to weave a lie with flattery and deceit.” Well, according to the lawyer and rancher, this position cannot be used “in function of easy enrichment, of a mafia culture that has permeated a good part of national politics, the Courts, the control entities, the unions and many administrative instances” .

He ends by saying that “it is not normal” for “a few characters to hide in freedom of expression who, due to ideology or resentment, manipulate some of the national circulation media and social networks from within, giving prominence to the underworld over the difficult work of the law ”Adds the letter presented by the journalist.

In that sense, it seems that Echeverri seeks to generate political repercussions in the country, since this letter adds to the claim of Alexander López Maya to launch himself into the presidency by the hand of the Democratic Pole and other politicians already confirmed for the 2022 elections .

However, Echeverri does not give proper names of politicians or political parties, he constantly attacks certain ideas, positions and ideologies that, according to him, are dangerous for future elections in Colombia.

Well, he ends by saying that “the country cannot continue to depend on those who, well or badly, have already provided their services and live demanding spaces, orphans of power and hungry for figuration and protagonism in a Colombia that has changed.” He even tells those politicians that no It specifically names that “Its function is to give guidance and advice, not to manage contracts and distribute state labor,” he emphasizes.