The 11th generation Honda Civic is already with us, presented in both its four-door and five-door versions. The five-door version will be the one that accumulates the most sales, both in the United States and in Europe, where it is not yet clear that the four-door will be commercialized. The news is not only that we already know the final design of the Japanese compact, but the news that It will only be marketed in a hybrid version e: HEV on this side of the pond. A detail that we have to clarify.

Honda Europe has announced that the European Honda Civic will only be sold in a full-hybrid version. This full hybrid will use the non-plug-in scheme we already know from the Honda Jazz e: HEV, Honda CR-V e: HEV and Honda HR-V e: HEV. They all share a common characteristic: its propulsion is electric and it is the heat engine that acts as a power generator, except for the moments in which the car works in 100% electric mode and the circulation at high and sustained speed, where the engine is coupled directly to the drive shaft.

The 11th-generation Honda Civic is built on a new platform.

Lacking a gearbox and relatively simple and compact, this system has shown great efficiency in different applications. Everything indicates that its power level could be similar to that of the HR-V e: HEV, with a power of around 130 hp – the HR-V e: HEV has 131 HP of combined power. Speaking of compacts, the Honda Civic will continue to be a C-segment car, but in terms of dimensions and technically, we could well consider it a D-segment. In fact, grows 3 cm in length, reaching 4.55 meters of length.

Built on a 19% stiffer and more robust platform, the Honda Civic SE 5-door comes with a relatively continuous design, but quite attractive. With respect to the four-door that we already know, it has a new “honeycomb” type grille, slightly concave. We like its good-sized tires, we like the drop in the roof – which almost resembles a coupe – and we like that its design does not fall into excesses or tricks. It is a very sensible car. And how could it be otherwise, very practical. 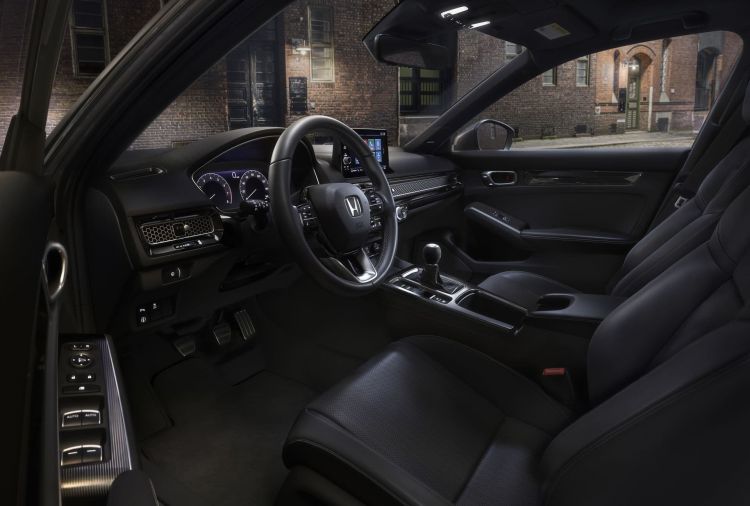 The capacity of its trunk has not been announced, but everything points to a figure in the vicinity of 500 liters, in addition to having a loading mouth 4 centimeters wider. The rear seats grow thanks to the car wheelbase increase – from 36mm to 2,736mm – and the interior increases in dimensions. The driving position does not change with respect to the four-door Honda Civic, with a discreet and modern design, of which we are left with details such as the grille that covers the dashboard or the beautiful appearance of the aerators.

Its digital instrumentation is new and older, it will have up to a 9 “screen for the infotainment system, compatible with wireless Apple CarPlay and Android Auto. What we will not be able to enjoy in Europe will be the turbocharged three and four cylinder engines that the Civic enjoyed before. Not even a manual gearbox, as it will have in the United States. The only hope in this regard is a possible 2.0-liter turbocharged Type R version, of which Honda has confirmed the future release.

At the moment, we do not know when the Type R version will arrive. If it arrives.