Spectrum distribution on 700 MHz has already been carried out.

After the delays and the controversy raised, the spectrum auction in the 700 MHz band It is finished. Specifically, 75 MHz have been distributed divided into 2 blocks of 2×10 MHz, 2 blocks of 2×5 MHz and 3 blocks of 5 MHz that constitute a total of 7 public concessions.

A total of 12 rounds have been carried out with the participation of the three operators admitted to the auction.

The total amount accumulated by all the concessions awarded amounts to 1,010,089,000 euros.

The concessions will have a minimum duration of 20 years and maximum of 40.

This is how the cast has been. The table provided by the Government lists the winning bidder for each concession, as well as the final price for each one. 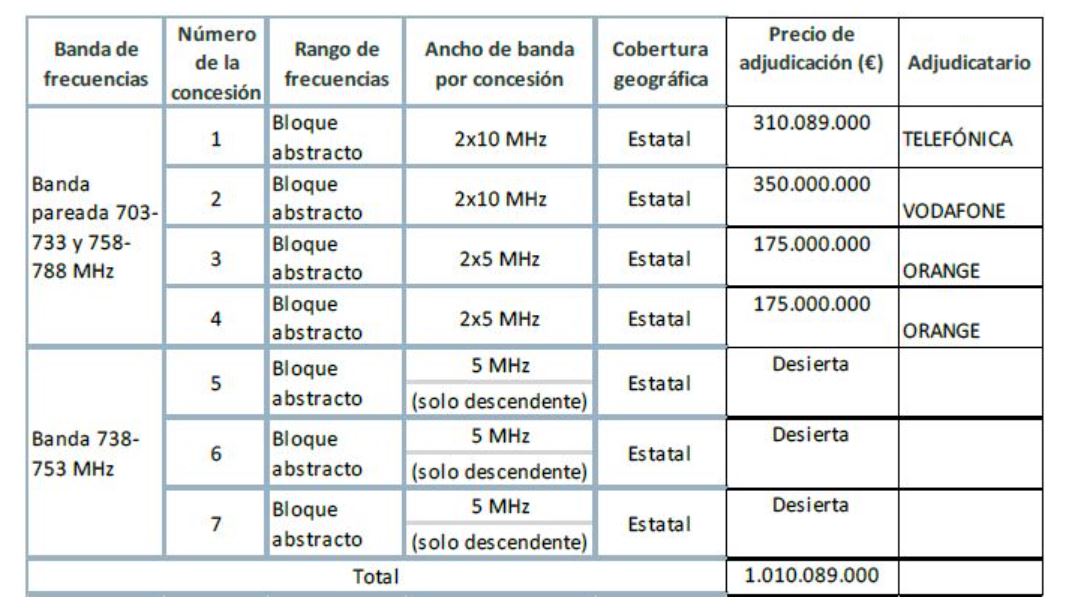 Spectrum distribution table in the 700 MHz band.Spectrum assigned by operator

The orange operator has obtained 2x10MHz of spectrum in the 700 MHz band, for which it has paid 350 million euros.

In this way, as the company indicates, “Orange is consolidated as the operator with the largest amount of spectrum in the two priority bands for the deployment of 5G technology, given that it also has 110 MHz in the 3.5 GHz band (3.4-3.8 GHz) “. The company has invested a total of 523 million euros in the acquisition of these frequencies.

Thanks to this position, “Orange will be the operator that will be able to offer higher 5G speeds in the Spanish market”, He maintains. The company will continue to accelerate the deployment of this advanced mobile network, with which it already reached 442 municipalities in 38 provinces at the end of the first quarter of the year and expects to offer 5G coverage to more than 50% of the Spanish population before the end of 2021.

In the words of Mónica Sala, general director of Red in Orange Spain, “This 700 MHz band is key for the development of 5G SA (Stand Alone) and its use by operators will favor a full use of all the advantages that this technology will make possible to promote the recovery of the economy through transformation society and the productive fabric of the country. Furthermore, this band will be essential to reduce the territorial digital divide in Spain ”.

In the case of Telefónica, the telco has been awarded 1 block of 2×10 MHz for a total amount of 310.09 million euros. This block is associated with coverage commitments to cover before June 2025 with 5G all municipalities with more than 20,000 inhabitants, airports, ports and AVE stations, as well as highways, highways and multi-lane roads.

The spectrum acquired was a milestone that the company waited for a long time and that allows it to deploy extensive coverage, greater penetration indoors and universalize some of the characteristics of 5G communications, such as low latency, they maintain from the operator.

Telefónica currently offers 5G in Spain to a 80% of the population with the installation of nodes that provide coverage to about 1,300 municipalities throughout Spain with a population of more than 37M inhabitants. This coverage includes from large cities such as Madrid or Barcelona to small towns with less than 1000 inhabitants such as Casas de Don Gómez (Cáceres) with 289 inhabitants, Arenzana de Abajo (La Rioja) with 230, Táliga (Badajoz) with 665 or San Esteban del Valle (Ávila) with 720.

Throughout the next semester, it will continue to expand and strengthen coverage to reach the maximum population, an aspect that will be boosted with the resolution of the 700MHz auction and the possibility of deployment in this band.

The 5G spectrum obtained in the auction just concluded in the 700 MHz (2×10 MHz) band joins the rest of the 5G spectrum in the 3,500 MHz (100 MHz) band. New technologies allow the deployment of multi-technology equipment (capable of operating in 2G / 3G / 4G / 5G) and multi-band (700, 800 and 900 MHz), which will allow Telefónica to migrate and share low-band spectrum from the older technologies to the newer 4G and 5G and take full advantage of spectrum availability in these low bands.

In the at international level, Telefónica assured in the United Kingdom (Telefónica UK / O2) in the 5G auction that took place last March a significant quota in the 5G auction for 448 million pounds that allowed it to increase coverage, especially in the interior of buildings, and increase the speed of loading and unloading in areas with a higher population density. Specifically, 40 MHz were achieved in the 3.6 MHz low band and 20 MHz in the 700 MHz band.

In Brazil, the auction of the 700 frequency will take place in the second half of the year.

Vodafone has acquired 2x10MHz of spectrum in the 700 MHz band, for 350 million euros. Said spectrum, as indicated by the operator, is subject to an annual reservation fee of 15.5 million euros.

The company will use the spectrum to “continue offering a differential 5G service in the Spanish market, expanding the coverage footprint extensively nationwide, and offering better coverage and service also inside buildings”, they clarify.

In this sense, Colman Deegan, CEO of Vodafone Spain has commented: “Vodafone supports and appreciates the best conditions offered by the government for this spectrum auction, which represent another step towards a sustainable and economically viable sector, necessary to maintain continuous investment in connectivity.” And he adds: “With the new 5G frequencies acquired, Vodafone Spain will accelerate the deployment of the pioneering 5G network so that both companies and individual clients can accelerate the recovery and take advantage of the digital transformation ”.

This is the third auction of frequencies for 5G networks carried out in our country, after the auction of the 3.6-3.8 GHz band held in 2018 and of the 20 MHz tender of that same band made last February 2021.

Fundes del Executive have stressed that the promotion of 5G technology in Spain is a priority included in the component “Digital Connectivity, Cybersecurity Boost and 5G Deployment” of Recovery, Transformation and Resilience Plan. The Plan foresees a public investment of 1,500 million euros to accelerate its deployment and one of its reforms is to make the priority bands available to operators.

5G technology is expected to have a great impact on the economy and job creation as it will allow the development of applications that will change the way in which products and services are produced, distributed and consumed. In addition, it will be crucial for digital transformation, as it will help other technologies such as the internet of things, big data, robotics, virtual reality or artificial intelligence to develop their full capabilities.