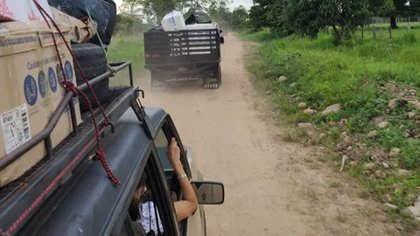 The trails between Colombia and Venezuela are used by smugglers to move illegal products. Reference photo

This November 21 a special operation was carried out by the Tax and Customs Police (Polfa) in which they captured six members of a network of meat smugglers that operated on the border between Colombia and Venezuela.

The gang, according to La FM, was able to enter at least 384 tons of food into Cúcuta and the metropolitan area illegally.

Gustavo Franco Gómez, director of the National Customs Fiscal Police, He assured that the dismantling of the band was due to a six-month intelligence work carried out by his team. The uniformed men managed to find the entry route, the storage place and the distribution sites for the contraband meat.

After collecting the pertinent information together with the Prosecutor’s Office, the uniformed men arrived at the Antonia Santos neighborhood where they stored the meat from Venezuela without complying with the health requirements, in a state of decomposition that affects the health of the consumer.

These meat products were sold and distributed in butcher shops in the center of Cúcuta and in the Central de Abastos, where, according to intelligence, they managed to sell 30 kilos of meat in a month; with earnings of $ 16 million in just one week.

The border with Venezuela is an important point for smugglers, because despite the fact that the border crossing is closed due to the cases of Covid-19, barrels of different contraband products pass daily on the trails that are controlled by illegal armed groups that move between Norte de Santander and the State of Táchira.

The president of the Cattlemen’s Committee, Andrés Hoyos, spoke with RCN Radio and insisted that the “The scourge of the smuggling of live cattle and meat in the carcass leaves considerable economic losses to a large number of families in the region, despite the operations of the authorities along the trails, this crime continues to be recorded.”

‘Serious situation on the border’

The situation at the border remains tense. At least 500 Venezuelans, who were in Colombia waiting to be authorized by Venezuela to return, tried to take the Simón Bolívar International Bridge by force last Wednesday to return to the side of their own, official sources reported.

Migration Colombia said in a statement that “about 500 Venezuelan citizens, who remained in Colombia awaiting authorization from Venezuela to return to their family, tried to take over the Simón Bolívar International Bridge, in the town of Villa del Rosario, in Norte de Santander ”.

The Simón Bolívar International Bridge, the main border crossing between Colombia and VenezuelaIt was completely full of people who, carrying packages, suitcases and bags, tried to pass towards the oil country.

Migration Colombia said that the situation was controlled by the Police and they also explained to the Venezuelans that “remaining stationed on the bridge represented a risk to their integrity, since the weather conditions in the area could cause a disaster.”

Likewise, they were told that the risk of being on the bridge is greater if one takes into account that on the Simón Bolívar there are some containers placed by the Venezuelan regime that block the passage of motor vehicles, which represents an “additional load.”

Likewise, Migration called on Venezuelans to “remain calm and do not expose their lives in the midst of the pandemic and adverse weather conditions.”

Venezuelans tried to cross the border into their country by force