The capital is the best example of the electoral turnaround that the Community of Madrid has made in less than two years: the PP won more than 420,000 votes in the city and it became the first undisputed force with more than 805,000 votes, some 485,000 more than the second most voted force, Más Madrid.

The electoral map of the capital was dyed completely blue this Tuesday because the popular ones became the most voted force in the 21 districts. In addition, in 18 of them the ‘sorpasso’ of the candidacy of Mónica García to that of Ángel Gabilondo was consummated, something that also happened at the regional level.

The incontestable popular victory was partly cemented in this setback of the PSOE, but above all it was armed in the massive loss of votes of Cs, which left almost 246,000 of the votes that he obtained in the May 2019 elections and practically disappeared at a testimonial level in all the districts of the capital. Only in Chamartín and Salamanca did the candidacy headed by Edmundo Bal have somewhat remarkable percentages, although reduced. 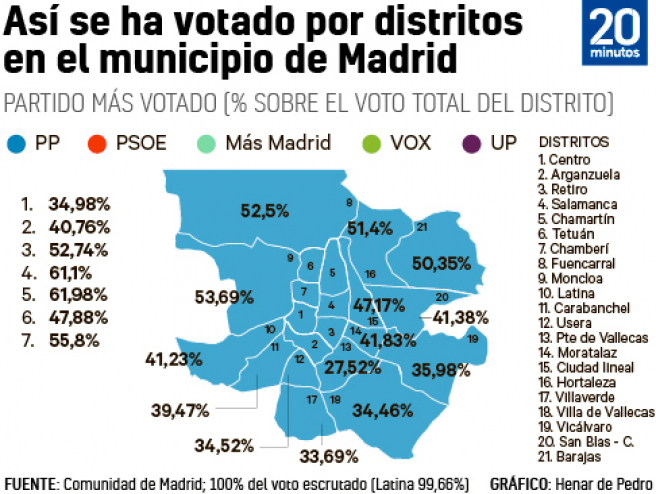 The socialists and the oranges are the big ones punished by the electorate in the capital, which went to the polls en masse: participation grew by more than seven points to stand at 75.60%, which means that around 150,000 more people came to their polling stations than two years ago.

It has been in this district where the training led by Pablo Iglesias has obtained one of its best results, ranking as the fourth most voted force and 10.03% of the votes. The candidacy of Pablo Iglesias achieved around 50,000 more votes in the capital than in 2019, although the formation read the votes as a failure. Across the city, Vox also won votes, but just over 10,000.

A very different situation from 2019

The results of this Tuesday contrast diametrically with those who threw the polls in the fall of 2019, in the last generals, when the PSOE was the first political force in eleven districts of the capital compared to the ten of the PP. 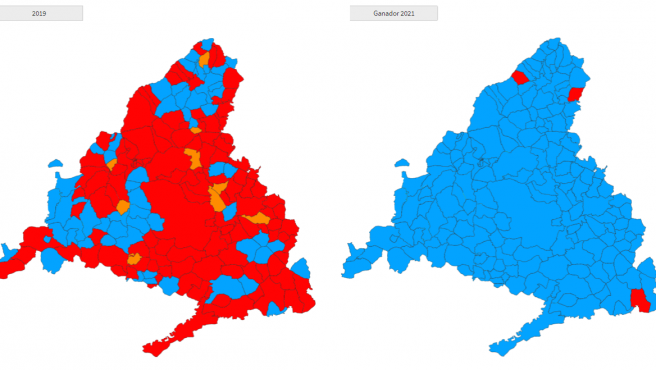 The Socialists maintained their first position in the districts of Arganzuela, Carabanchel, Centro, Latina, Moratalaz, Puente de Vallecas, San Blas-Canillejas, Usera, Vicálvaro, Villa de Vallecas and Villaverde. Now it is third force in all of them except in Villaverde, which is second. The ‘popular’ then took first place in Barajas, Chamartín, Chamberí, Ciudad Lineal, Fuencarral-El Pardo, Hortaleza (where it went from third to first force), Moncloa-Aravaca, Retiro, Salamanca and Tetuán, common fiefdoms of the PP.