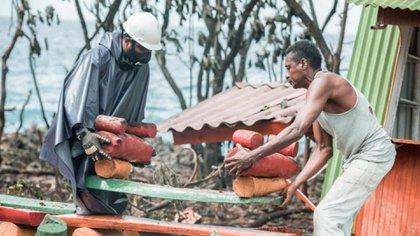 The Insitituto de Hidrología, Metereología y Estudios Ambientales (Ideam) warned about the new tropical storm that is hitting the north coast of Colombia, Iota, and ensures that it has a high probability of becoming a major hurricane.

In the last minutes, IDEAM confirmed that Hurricane IOTA is already in category 2, with sustained winds of 155 km / h. It is expected that in the next few hours it will continue to increase its category with possible effects on Providencia, San Andrés and the keys of the archipelago. 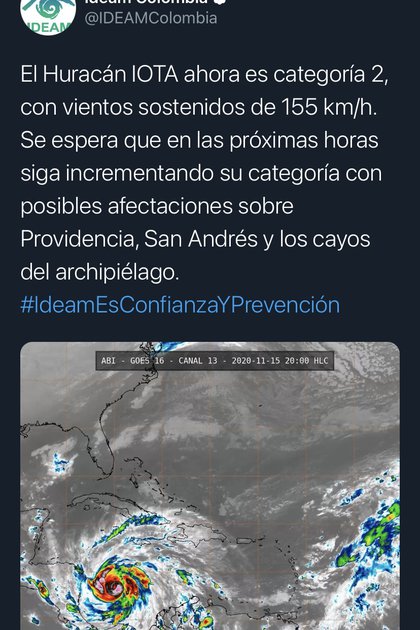 “It is estimated that in the next few hours it will reach larger categories. This means that the maximum winds are 155 kilometers per hour. It continues moving towards the archipelago of San Andrés, Providencia, Santa Catalina and the keys at a speed of 15 kilometers per hour. It remains 175 kilometers from Providencia Island. Hurricane warning is maintained for Providencia, hurricane watch for San Andrés Island, tropical storm warning for San Andrés”, Stated Yolanda González Gómez, director of Ideam, through a message to the media on Sunday night.

Keep reading: Santa Marta beaches close due to the passage of tropical waves

According to the report, Iota would formally reach the hurricane category between the morning and afternoon of Sunday, November 15, and according to the institution, the alert for tropical storm season would be maintained throughout the remainder of November.

According to the institution, the area of ​​influence of the strong storm will be the departments of the Caribbean region and, for the most part, San Andrés, Providencia, Santa Catalina and their keys. Its displacement will bring with it copious rainfall, thunderstorms and strong winds.

In addition, the Ideam advises to be extremely careful in areas of high slope due to the probability of sudden floods and landslides. The areas altered by the Institution are the Sierra Nevada de Santa Marta, the south of La Guajira and north of Cesar and Magdalena.

According to him The United States National Hurricane Center (NHC), the trajectory over the Caribbean Sea will be two days, until it approaches the coasts of Nicaragua and northeast Honduras between the end of Sunday and the beginning of Monday.

According to this same entity, when approaching Latin America, the storm would become a major hurricane, jumping to category 3 or higher on the Saffir-Simpson scale. Other impact sites will be the countries of Panama, Costa Rica, Jamaica and southern Haiti.

The Undersecretary of Prevention and Attention of Disasters of the Government of Atlántico warned the community of the constant rainfall that will experience during the rest of the year. “The rainy season and strong winds cause the fall of trees, the collapse of walls in poor condition, as well as floods in water rounds. That is why it calls on the community not to dump garbage into streams, channeled and not channeled, so as not to cause sedimentation “Candelaria Hernández, leader of the division, warned, according to the newspaper El Heraldo.

He added that safe sites should be sought during the impacts of thunder and not exposed in open areas, under trees and metal structures, favoring possible injuries for Altanticenses by electric shocks.

In municipalities such as Puerto Colombia, in the Atlantic coastal area, several families have had to be relocated due to landslides caused by the extensive rains and the change in the waves.

On the other hand, Cartagena reports landslides and floods in different parts of the city due to the impact of Iota. According to the General Maritime Directorate (Dimar), the height of the waves in the city, which is generally low, ranges between 2.0 and 2.5 meters. For this reason, the institution alerts those who carry out maritime activities and advises extreme caution.

Two days ago, the Santa Marta mayor’s office, through the District Tourism Institute (Indetur), declared that the city’s beaches would be closed indefinitely in order to protect citizens and tourists.

Follow the path of Hurricane Iota live: alert in San Andrés and the Colombian Caribbean

This is the letter from Luigi Echeverri, former manager of Iván Duque’s presidential campaign, to Colombian businessmen