The Jeep willys It is a true icon in the automotive sector. The small off-road vehicle was born as one more weapon for World War II, projected as a versatile, agile and resistant vehicle. The US War Department encouraged some companies to submit their project in the record time they had stipulated. Based on Bantam, the Willys was the highlight. The next thing was to mass produce it and transport it to the places where the conflict was present, something that was not exactly easy at that time.

The Allied side had to work a lot at the logistical level due to the blockade exerted by the Axis forces on them. This meant that practically everything had to be sent by ship or plane, forcing shipments to be optimized to the maximum. In the case of the SUVs, it is estimated that at the end of the war no less than 648,000 units in total, around 360,000 for the Willys MB and another 278,000 for the Ford GPW, as the oval brand also entered production because Willys-Overland could not meet the production demand on its own.

Although the Jeep Willys were compact, it was quite a challenge send them to the other side of the ocean in large quantities, even more so when there was the pressure of the armed struggle. In domestic shipments, it was easy for the manufacturer to stack them on top of each other and load them onto trucks or freight trains. However, to take them by ship to Europe or Asia a newer solution was used: put them in a box (literally).

That it was such a simple and versatile vehicle was a key advantage in its logistics. The windshield was disassembled, like the wheels, which were one on the front and the other flat on the seats and trunk. As they did not have a roof, the height was really low and they fit in very compact wooden boxes, occupying practically the same size as the amphibious version despite being larger. Jeep Willys they were finished mounting in just minutes when they reached their destination. 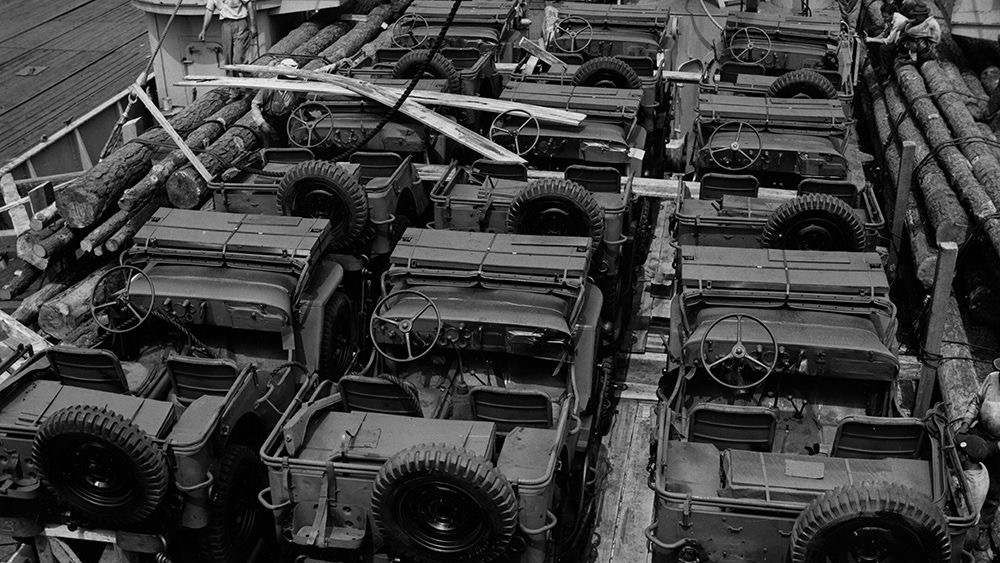