In 1965 Gordon Moore observed a curious phenomenon: every year the number of transitors in an integrated circuit doubled. In 1975 he would revise that estimate slightly: the phenomenon did not occur every year, but every 18 months. That prediction has been an invisible reference in the technological world that has been inexorably fulfilled. It is the famous Moore’s Law.

Another Gordon, surnamed Bell, made another observation in 1972, much less well known but just as unique. He predicted that about every decade there would be a generational shift in the world of technology, a breakthrough that left the previous generation behind. Since then, Bell’s Law has also been shown to be fairly accurate., and according to her we are at the gates of a new era of computing.

Let’s play to guess (a little) the future

Gordon Bell was an early employee of Digital Equipment Corporation (DEC), and was commissioned to design several of his legendary PDPs. He would later end up being responsible for engineering and development for VAX, a family of workstations with their own set of CISC instructions that have been successful in business for more than a decade. 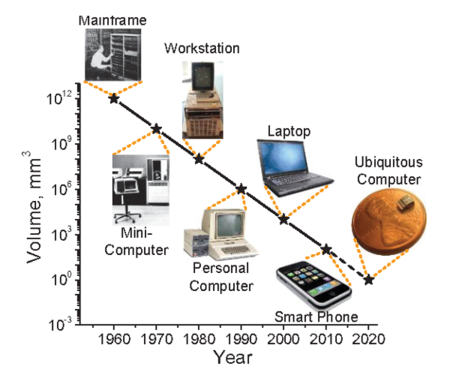 In 1972 Bell observed how the market had changed since he joined DEC: from mainframes that dominated everything in the 1960s it happened when waking up from minicomputers that brought computing to many more areas, especially in companies and academic environments.

In fact, he realized that the price of these machines did not change: what really did were their internal specifications, which made them for the same price, much more powerful machines could be accessed year after year.

In essence what the then baptized as Bell’s Law (or Bell’s Law of Computer Classes) is that if the power of a computer doubled every two years, after a decade those computers would be 32 times more powerful.

For Bell when the power grew and was multiplied by 10 there was a paradigm shiftAnd that it did so by multiplying by 32 marked a singular milestone: one in which a specific task went from being barely possible (very difficult to perform) to completely trivial.

The result of that advance is a new kind of computing platform which also comes with new capabilities and concepts associated with it.

The estimate is very optimistic, everything must be said. The power of our computers and mobiles does not double year after year, but it is true that If we look back ten years, the power of what we have now makes a fool of what we had before and it certainly enables capabilities that were almost unthinkable before.

Although the time bands have not always exactly respected that 10-year period, the truth is that Bell’s Law has of course an answer in the evolution of the technology market:

We could also consider that the arrival of the iPhone (which in a certain way “anticipated” that Bell’s law) raised that era of computing in which we have been immersed in recent years and that has had a spectacular impact.

The next era of computing

Bell predicted that home and body area networks would begin to develop in the 2010s that we have already left behind, and he was right: the Pebble ignited the fever for smart watches that later led to the development of quantifying bracelets. and the rest of werables that now triumph in the market.

What is the next era of computing? Everything seems to point to what Rick Osterloh and Google have called ‘ambient computing‘and that it is a kind of supervitaminated IoT– Virtually everything becomes a computer, and virtually everything is connected without the need for human intervention.

In that category there is no longer a defined format, and in fact that era of computing seems to be defined by lack of formatting, which allows us to encompass potential disruptions such as the autonomous and connected car or those theoretical augmented reality glasses that seem to be a possible next evolution of wearables. This decade of 2020 that has just begun may be leading us into that future.