Would you be willing to watch a 15 or 30 second ad while playing on the Play or on the computer in exchange for a skin or an advantage? PlayerNOW, a new platform from Simulmedia (a company specializing in television advertising technology), believes so and precisely for this reason has launched a service that makes it possible.

This type of proposal is common in mobile games. It is relatively normal in a free game that when we die we can see an advertisement in exchange for receiving an extra life or getting more coins. This, however, has not been seen in PC and console games., usually more exposed to loot boxes, and when it was seen (as was the case with the intrusive publicity of ‘UFC 4’) the criticism was not long in coming.

Do you want a skin? Look at this ad

According to Axios, who have had the opportunity to speak with the founder of Simulmedia, Dave Madden, the company have been testing console game ads for over a year. Through its technology, developers can encode these ads in console and PC games, in exchange for offering players a reward in the form of skin, time advantage, coins, etc.

Simulmedia is able to know if the user has seen the full ad and then give them the reward. The reason for implementing these ads, they say from the company, is that it is difficult to reach the public between 18 and 34 years old that, for the most part, are “cord-cutters”, a term that in the world of cable television means that they do not pay for cable or satellite television channels since they prefer proposals such as YouTube, Netflix, etc. 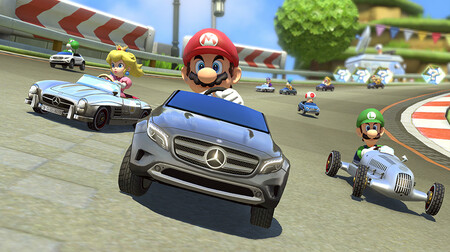 In ‘Mario Kart’ there has been a Mercedes product placement.

Advertising in games is cheaper and more efficient, says the company’s founder. This also ensures that in a pilot test with ‘Smite’ (a free Tencent MOBA-type game) it was discovered that players were more likely to play and spend money on the game if they saw ads within it that gave them access to advantages. And it’s funny, because Madden himself acknowledges that 90% of free to play game players never spend money in the titles they play.

According to Madden, 90% of free to play game players don’t spend money gambling

From what they explain from Axios, it does not seem that the ad is going to be played only at a given moment, as it happens on television, but it will be the user who will decide if he wants to reproduce it in exchange for the reward. According to Madden, Simulmedia has struck deals with some of the biggest video game studios, such as Electronic Arts and Hi-Rez (Tencent).

Console advertising is not strictly new. Without going any further, in ‘League of Legends’ there has been advertising of Mastercard (the logo in some flags and capsules for skins) and in ‘Mario Kart 8 Deluxe’ there has been product placement of Mercedes-Benz. However, these types of ads, which are the daily bread in mobile games, are not normal on consoles and PC. And in that sense, the company plans to launch in-game ads in a dozen games by the end of the year.