Since he changed his style of play to make it the fastest and most spectacular in universal handball, FC Barcelona has not stopped receiving compliments unanimously and the fans ‘hallucinate’ to see them running like crazy in each game regardless of the result.

The numbers do not lie and they do not allow to be questioned as they are absolute values. The team led by Xavi Pascual with David Barrufet as manager has won every game in the Asobal League, the Copa del Rey, the Super Cup, the Catalan Super Cup, the Asobal Cup and the Champions League in the last two seasons. With the last European Cup final also played in Cologne at the end of December 2020 against THW Kiel as the only sad exception.

In parallel form, the players have also been growing to the point that they represent four of the seven pieces in the ideal team of the Champions that the EHF announced this Friday on the eve of the ‘semis’.

The Croatian Luka Cindric has been chosen as the best center-back of the tournament accompanied by three other teammates: the French right-back Dika Mem, his compatriot pivot Ludovic Fàbregas and the right-wing youth squad Aleix Gómez.

The ideal team is completed by the Danish goalkeeper Niklas Landin (Kiel), the Danish left-back and ex-Azulgrana Mikkel Hansen (PSG), the left winger and Barcelona youth squad Valero Rivera (Nantes), the Danish Henrik Mollgard as defender (Aalborg), the Frenchman Dylan Nahi as best youngster (PSG) and Alberto Entrerríos (Nantes) as best coach, also with a season at Barça as a player. 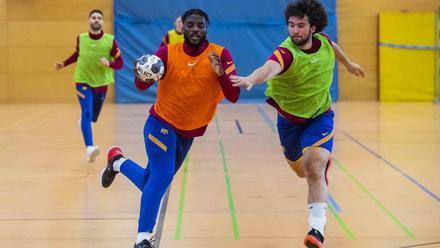 Dika Mem is the best right-back in the Champions League

The fact is that the aforementioned generalized recognition for the radical change that is being printed in the way of playing this team of Xavi Pascual also joins the awards to up to four of his main pieces in one more example that this project is as firm as it is well structured… a pity that it is broken by the decision of the new Board, that yes, it has every right to create its structures.

Therefore, the best possible way to finish monetizing so many positive ‘inputs’ would be to focus solely and exclusively on the semifinal this Saturday against a Nantes that has the best coach and with the best left winger of the course before thinking about the grand final on Sunday in which he would face the winner of the duel between Paris Saint-Germain and Aalborg Handbold from 15.15 hours.