Thursday’s press conference was also featured prominently by 154-pound contender Erickson “Martillo” Lubin and former unified world champion Jeison Rosario, who will battle in a WBC Super Welterweight Title Elimination Fight as part of the main co-event, with super welterweight contender Carlos Adames and Mexican Alexis Salazar, who will battle 10 rounds as part of the pay-per-view, and with Batyr Akhmedov and former world champion Argenis Méndez, who will inaugurate the broadcast PPV starting at 9 pm ET / 6 pm PT

Tickets for this live event that will take place at the State Farm Arena and is promoted by Mayweather Promotions, GTD Promotions and TGB Promotions, will go on sale this Friday at 10 am ET, and can be purchased by going to ticketmaster.com . The Akhmedov vs. Mendez is promoted in conjunction with World of Boxing.

Here are the statements of those attending this Thursday’s event at the Omni Atlanta Hotel at the CNN Center: 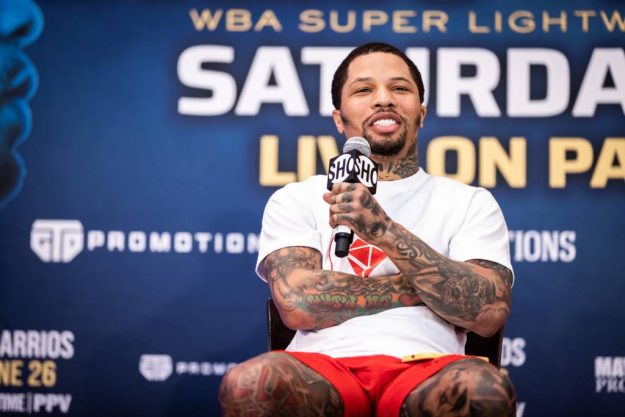 “The training has been great. We always prepare in a great way and are ready for whatever Barrios plans. I hope it will be an action packed fight.

“I think he is making a mistake. It’s not just about height. He thinks he’s stronger than me, but we’ll see. If he thinks I’ve never seen someone like him, that’s fine. But everyone always ends up learning their lesson on fight night – that’s where I bring out the real me.

“I have been striving to improve as a boxer every day in the gym so that I can be better on Saturday night. I’m excited about what I’m going to do as moving up to 140 pounds is definitely a great opportunity. I want the fans to see a great fight ..

“You know I am on the prowl. I’m enjoying it, and we all know if I hurt him then I’ll finish him off during an explosive night of boxing.

“When I fight bigger guys in the gym, I always perform well. I hate when people think they can take advantage of me for thinking I’m short. You will see the best Gervonta Davis in this fight.

“He will be shocked when I hit him. Not only will it be tough, but it’s about where I’ll hit him, and he’ll find out on Saturday night. Once again, not only my fight, but the entire card will be spectacular. I plan to get to the stadium early to watch the preliminary fights during a great night of boxing. “ 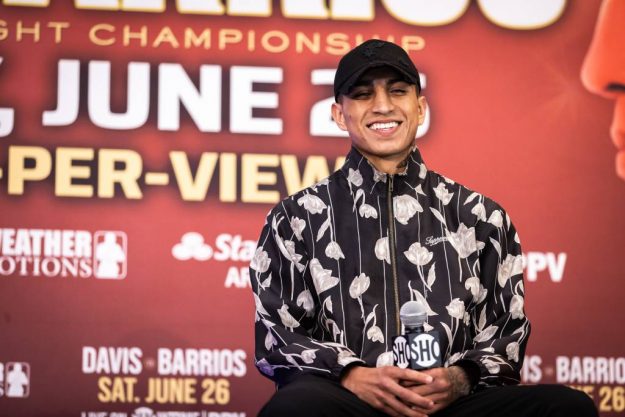 “I have all the necessary tools and the size to complicate ‘Tank’, and that is my plan.

“Both of us hit with bad intentions. We go in there to hurt and knock out our opponent. May the best man win, be it in the first or twelfth round.

“Tank ‘Davis will learn what it’s like to be in the ring with a boxer like me. Buy your tickets and ask for pay-per-view. I know that he is ready and that he has trained in a great way in the bay. We are both going all over this Saturday.

“We will realize many things mutually this Saturday. My expectation is that he will come with everything, but I will not be left behind. They will be bombs without quarter.

“My coach is one of the Oakland originals and he always finds a way to motivate me. I end up being responsible for what I say, and I always keep my word. This Saturday’s fight will be very exciting.

“I am just so focused. Virgil has prepared me in a great way and I will make the necessary adjustments.

“As Leonard Ellerbe said, they have big plans for (Gervonta). My intention is to ruin those plans this Saturday.

“I feel very confident and strong after my best preparation since I was a professional. I’m ready to fight and Saturday will just be another great performance from me.

“I chose this fight because I didn’t want any warm-up fight. I don’t like guys with weird markings, I don’t want accessible fights. I want the best in the division for people to say that I beat them all when I get my chance to fight for the title or be champion ”.

“I didn’t get here to stay on the shore. I want to be the best in boxing and reach the top. Not just in my weight, but in all of boxing. “

“He will go out to fight aggressively like he always does. If he tries to box against me, that will be a mistake on his part. He is not capable of boxing better than me, I am more skilled than anyone, and I will tame him when he comes out to fight with his typical aggressiveness.

“I am excited for the pay-per-view and for the return of the fans. I have been ready for weeks and I will give a great show to the fans ”.

“I am absolutely ready to do whatever it takes to win. I have the power in my hands to prevail in this fight, whether in the first or twelfth rounds. I am ready both physically and mentally to last all 12 rounds and be the winner.

“I am not interested in what is said now. We will see who is faster, stronger and with more will to win this Saturday. The rest is pure chatter.

“People can expect to see a war. I am a warrior and I love fighting that war inside the ring. I want people to be happy and to enjoy the fight. It will be a great show ”.

“My opponent is very talented, but I am more experienced. That will be a big factor in this fight, and I will end up with my arm raised.

“I am in an excellent position to get another opportunity to fight for the title, and that promotion will begin this Saturday. I have everything I need to be a world champion ”.

“No matter what my rival says, it’s not just about strength. Strategy also matters, and you can accomplish a lot when you fight smart. I will be ready to fight in a big fight this Saturday night.

“This will be a war. We’re both ready, so let’s get in the ring and fight. I’ll give my best.

“I respect Adames, but nobody knows how good I am. This is my chance to prove it ”.

“I am not about to underestimate Argenis Méndez. He is a former world champion and a boxer with a lot of credibility. I’m just thinking about my fight against him, and then we can talk about my rematch against Mario Barrios.

“My rival is very experienced. He was the most difficult and experienced guy of the options we had. He fights in an exciting way and faces, so it will be an action packed fight.

“I also think that his style is tailor-made for me. I like that he is charming, and if God wants I will be the winner ”.

“I am delighted to be here. I think this fight will be different since my rival also likes to face and be aggressive. That is exactly what I also like to do.

“My opponent is very strong, and our fight will be very good as we will exchange blows, but I will be the one to get the victory.

“This will be the great opportunity that I plan to take advantage of. I am a warrior and I will win this Sunday to go in search of the title I yearn for ”.

“There is no bigger stage than the one on Saturday night. When you think of great fights, you think of Gervonta Davis, the most exciting boxer in the world.

“’Tank’ Davis provides excitement, and that’s what people want. Mario Barrios will be a difficult opponent for him. Words are not enough for me to express how much I respect him as a young boxer who does everything well. Barrios is a great puncher who possesses excellent speed and is trained by a very good friend of mine, Virgil Hunter, who guided Andre Ward throughout his career, and we already know how Ward fared. Virgil Hunter will make Barrios ready.

“I am also very excited about the co-main event. Erickson Lubin trained under one of boxing’s best coaches like Kevin Cunningham and has five wins in a row. I am impressed by his commitment to excellence when taking on the top contenders. Jeison Rosario, in turn, is a former unified champion who has also prepared tremendously and is determined to win back everything he lost recently.

“The card this Saturday night is full of talent. We have Batyr Akhmedov, who has faced WBA Champion Mario Barrios and will look to defeat Argenis Méndez in a fight that will not stop offering action.

“We have big plans for ‘Tank’ Davis. Will Barrios ruin them? Tune in to SHOWTIME pay-per-view to find out. “

“SHOWTIME Sports is going through an unprecedented string of combat sports, both in boxing and in mixed martial arts. From ShoBox, through SHOWTIME CHAMPIONSHIP BOXING, to Bellator MMA, and even that exciting exhibition that no one saw coming. SHOWTIME continues to provide exciting and interesting events at every level of combat sports. We are in the middle of a string of 10 events in nine weeks. This event that is coming up on Saturday will be the jewel of all of them.

“This will be only the fourth boxing fight at State Farm Arena, but the second in the last 18 months. The first was ‘Tank’ vs. Yuriorkis Gamboa on December 29, 2019, with an almost full turnout of more than 14,000 people.

“Almost six years ago, ‘Tank’ was on the non-televised portion of a ShoBox event, and now he’s here headlining a pay-per-view for the second time after the biggest win of his career. This will be his tenth fight on SHOWTIME, and probably the hardest yet as he raises two pesos to seek to be elite.

“’Tank’ has never faced someone as tall or as far-reaching as Mario Barrios in his 24 fights. ‘Tank’ also has its own weapons. Of the boxers ranked by The Ring, only two in all of boxing boast a higher percentage of knockouts. Tank’s is 96%.

“The WBA champion has a 26-0 record and 17 KO’s, he’s tall, strong and tough, and his name is Mario Barrios. If you’ve seen the ‘All-Access’ episodes, you already know his warrior spirit. This fight is for anyone with a Tank who seems unstoppable and climbing two categories to face the greatest challenge of his career.

Erickson Lubin is 23-1 and is on his seventh fight on SHOWTIME as the number one contender for the WBC at 25 years of age. That means he is the mandatory one. Most of those in his position as mandatory would go for an easy fight while they wait to fight for the title, but that’s not Erickson Lubin. Erickson Lubin is looking to defeat former unified champion Jeison Rosario. This fight quietly could have been the main event on SHOWTIME.

“Jeison Rosario is a former unified champion at 154 pounds, one of the top three or four by consensus after losing to the best fighter in the division. This will be a great battle.

“I want to thank our partners at PBC, Mayweather Promotions, and TGB Promotions. This is a phenomenal card and we are proud to be here in Atlanta to enjoy it. “