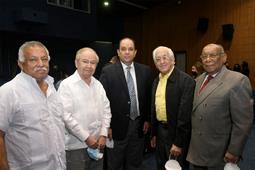 With the distinction to the radio broadcaster Ellis Pérez, and to the veteran announcer Osvaldo Cepeda y Cepeda, the Indotel Center put the documentary “Episodes” for consideration, a proposal that tells the story of the first broadcast of a baseball game in the country.

The official launch of “Play Ball”, which is the first chapter of the documentary series that responds to the name of “Episodes”, has the support of the Ministry of Sports and took place in the Auditorium of the Indotel Center on Isabel Street La Católica in the Colonial Zone.

Ellis Pérez, the ideologist to launch the transmission of Major League Baseball games in the country, said that the initiative was born with the interest of offering something new to baseball lovers.

He indicated that, although broadcasts had already been made for the 1950s, the originality was that the matches of the teams where Dominican players played were followed. “That was the concern, offering a product that was different and could highlight the work of our players in the Major Leagues,” said Pérez.

“What we did was follow the performance of the Dominican players as a way to do something different,” he added. Mr. Nelson Arroyo, president of the Board of Directors of Indotel, when speaking, described the meeting as an emotional day.

KNOW MORE
Launch and novelty
50’s
At the launch of “Episodes” were Mr. Franklin De la Mota, Vice Minister of Sports, who represented Francisco Camacho; as well as members of the Board of Directors of the Indotel Center.