Moments after 7.12 (Los Angeles time), a local policeman named González he made it to the border of Rolling Hills Estates and Ranchos Palos Verdes, where a Genesis GV80 model vehicle had left the road, passed through the bushes, and ended up overturned and seriously damaged on the grass. Inside he detected a single occupant, injured: it was the multi-awarded golfer Tiger Woods. Immediately, with his radio, he made the alert call asking for reinforcements and assistance. It was released by The Sun and offers details of what the officer found at the scene of the accident.

“Traffic accident. Trapped person. Sheriff at the scene. Vehicle on the side of the road ”, you hear him pronounce while modulating, in an audio that offers potholes. The police officer arrived at the scene at 7.28 in the morning on Tuesday, just six minutes after the central received the 911 call.. The vehicle was traveling northbound on Hawthorne Boulevard on Blackhorse Road when it crashed.

The firefighters had to use a tool known as “Jaws Of Life” to free the golfer, proof of the difficulties posed by the terrain, his state of health and the damage his vehicle exhibited. These pliers can be used both to cut part of the bodywork and to spread and separate it, with the intention of creating a hole for the victim to exit.

The athlete’s accident, in turn, caused another road incident: according to Los Angeles County spokesman Henry Narvez, another car stopped on the side of the street to see what happened up close and was hit from behind.

“Tiger Woods was in a car accident this morning in California, where he suffered multiple leg injuries. It is currently being operated. We appreciate your privacy and support ”, reported Mark Steinberg, Woods’ agent, in consultation with Golf Digest, hours after the overturn.

Woods He is considered the best golfer of all time by various specialists and has won the Masters Tournament five times, the US Open three times, the PGA Championship four times and the British Open three times. In the last time, a back injury for which he was intervened on five occasions (the last in January of this year) had taken him away from the playing fields. 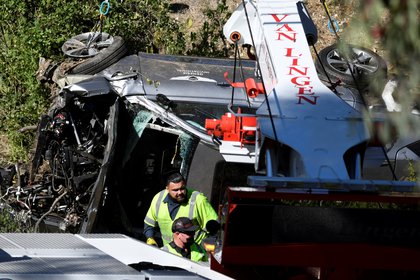 “We can deduce that it was going at a high speed; that place has a high frequency of accidents because it is downhill, it is not unusual. There are no brake marks on the asphalt ”, informed the authorities in a press conference.

“I was conscious. Our staff verified that he could breathe and was conscious. He did not appear to be under the influence of alcohol, drugs or some type of narcotic. The cabin of the vehicle was fairly intact; that allowed him to survive, the front was destroyed and the airbag had been activated”They explained how Woods, who was immediately taken to the hospital, saved his life.

Shocking images: this is how Tiger Woods’ vehicle was after the accident Tiger Woods’ background at the wheel: from crashing at the door of his mansion to being stopped by the Police Details of Tiger Woods’ accident: “He did not seem to be under the influence of alcohol , drugs or some type of narcotic “