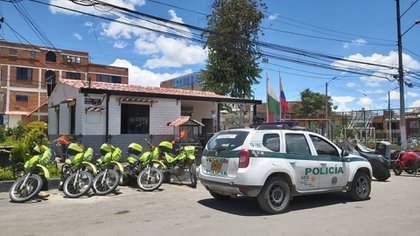 Soacha Police Station, where nine inmates died in a fire, presumably because police officers did not respond to their calls for help. (Courtesy Gustavo Roa – Q’hubo Bogotá)

A judge from Soacha confirmed, on the afternoon of February 19, the home security measure for Aleida del Pilar González, Jorge Eliécer Suárez Orduz and Gabriel Ruiz Moreno, the three policemen involved in the death of eight people after the fire of a CAI in the San Mateo neighborhood of said municipality.

As determined by the togado, “The office indicates that it considers necessary the imposition of a measure of custodial assurance”, Taking into account the seriousness of the events for which they are accused and for which the Attorney General’s Office is also investigating them.

In fact, the judge’s decision It is in line with what is requested by the Public Ministry, leaving aside the request of the Attorney General’s Office, who asked that they be sent to prison and, therefore, ended up appealing the decision, so it will now be reviewed by another judge.

The latter, reported the newspaper El Tiempo, You will also have to deal with the appeal for reversal filed by the lawyer of one of the defendants.

It is worth remembering that, the Prosecutor’s Office imputes to the uniformed charges of aggravated homicide and attempted murder. During the hearing, the representative of the accusing entity indicated that, “They were able to avoid that result (the death of the detainees), they had the possibility to act, but they did not.”

These charges were imputed by the entity in a hearing on February 18. However, the three policemen pleaded not guilty. That, despite the fact that the prosecutor presented the videos in which see the desperation of the inmates who ask for help to get out of the cell, therefore, he asked the first judge of Soacha to assure the uniformed men with a custodial measure.

Is that, according to a report by Noticias Caracol, the lawyers of the group of uniformed men want to take the investigation to the Military Criminal Justice because, according to them, those involved had no training to care for people deprived of their liberty and they insist that the ordinary justice should not judge these policemen.

Despite this, the Prosecutor’s Office insists that, according to several witnesses, the accused had to do with the start of the conflagration: “The policemen said ‘well, burn’, and with some keys they began to move them in front and said ‘burn’, I was folding the back covers”Narda González, deputy attorney for this case, told the hearing, and who obtained this testimony from one of the young survivors.

According to initial investigations, at the scene of the events, which would now become a crime scene, traces of gasoline were found, which would have triggered the massive spread of the fire. Likewise, it was reported that, according to witnesses in the case, there was not much human effort on the part of the authorities to save the young people within the CAI.

As an aggravating factor, the Public Ministry officials argue that both Lieutenant César Martínez and Second Lieutenant Aleida González, who served as commander and deputy commander of the Police station, they did not issue the necessary orders to prevent the injuries of three of the detainees and the death of the eight people remaining who shared the cell.

Bogota councilor Diego Cancino, one of the first to report the events, told the Colombian newscast that “We categorically reject the request of these lawyers when they ask that the investigation be transferred from the ordinary jurisdiction to the military criminal jurisdiction, they are asking that the case remain in impunity”.

Read also: JEP offers more details on the false positive report and denies that it seeks to disqualify Uribe