Our telecommunications systems require the use of repeatersboth on the ground and via satellites, so that signals are maintained and can travel long distances. In the developments towards the future quantum internet, quantum memories they play that same role. Together with the generating sources of the qubits or quantum bits, they will be the other basic component of the system.

These new memories act as repeaters of data operations using two characteristics of the quantum world: the overlap (the possibility that a particle is in several states at once, like Schrödinger’s dead and alive cat) and the entanglement (Correlation established between two distant particles, in such a way that the interaction with one affects the other).

ICFO researchers have managed to store a single photon in a quantum superposition state for 25 microseconds in two memories at the same time, separated by 10 m apart.

But to get to the quantum internet, it is first necessary to entangle the long-distance quantum memories and maintain the entanglement as efficiently as possible.

In this context, researchers from the Institute of Photonic Sciences (ICFO) in Castelldefels (Barcelona) have taken a great step, according to the study collected in Nature magazine cover.

The authors have managed to store, for a maximum of 25 microseconds, an unique photon between two quantum memories separated from each other by 10 m away. They knew that this particle was in one of the two memories, but not in which, a common situation in the counterintuitive quantum world.

The photon would be in a state of quantum superposition in the two memories at the same time, which, surprisingly, were several meters apart.

The system could be integrated into the traditional fiber optic communication network, paving the way for long-distance operation in the future quantum internet.

The team learned that entanglement had been created by detecting a photon in the telecommunication wavelength, which was also stored in quantum memories in a multiplex, a technique that allows several messages to be sent simultaneously through a single communication channel. These two characteristics are key to being able to scale or extend the system over great distances and, for the first time, they have been achieved together.

“Until now, other groups had already achieved several of the milestones achieved in this experiment, such as entangling quantum memories or storing photons in quantum memories with high efficiency and rate, but the uniqueness of this experiment is that our techniques have achieved it in joint and efficient, and that the system can be extended to great distances “, highlights Darío Lake, one of the study authors.

Technically, researchers have been the first to achieve an entanglement between two solid state quantum memories (matter-matter), with properties multimode (with various modes of propagation), remote (placed at a certain distance) and operating on the wavelength of current telecommunications.

Therefore, it is a potentially scalable technology that could be integrated into the traditional fiber optic communication network, paving the way for long-distance operation in the future quantum internet.

To carry out the experiment, the team used as quantum memories some crystals doped with praseodymium, a chemical element from the group called rare earths.

Two photon pair generator sources, correlated and individual, were also used. In each photon pair, there was one called “delivery courier“, With a length within the telecommunications range of 1436 nm; and another called “sign”, with a wavelength of 606 nm.

As quantum memories, crystals doped with praseodymium, a rare earth, have been used and signal photons and messengers have been used to carry out the experiment.

The signal photons were sent to a quantum memory, made up of millions of randomly placed atoms inside a crystal, and stored there through a protocol called AFC (atomic frequency comb).

In turn, the messenger photons were sent through a optical fiber to a device called beam splitter, where the information on its origin and trajectory was completely erased.

Scheme of the experiment and location of the laboratories involved. / ICFO

Another of the authors, Samuele grandi, comments: “We erased any type of characteristic that would tell us where the messenger photons came from, because we did not want to have any information about the signal photon or intuit in which quantum memory it was being stored”.

By erasing these features, the signal photon could be stored in any of the quantum memories, which meant that there was entanglement between them.

To confirm and verify that an entanglement had indeed been achieved, the scientists saw a click on the monitor each time a messenger photon reached the detector. This entanglement was the signal photon in a state of superposition between the two quantum memories, being stored as a shared arousal by tens of millions of atoms for up to 25 microseconds.

“The curious thing is that it was not possible to know if the photon was stored in the quantum memory of laboratory 1 or laboratory 2, which were more than 10 meters away,” emphasize Darío and Sam. Although this is the main feature of our experiment, and therefore something we expected to happen, the results in the laboratory were still counterintuitive. And even more peculiar and mind-boggling for us, we were able to control it! “

“The curious thing is that it was not possible to know if the photon was stored in the quantum memory of laboratory 1 or laboratory 2, something counterintuitive that we were able to control,” the authors highlight

The messenger photon acts like a homing pigeon, and scientists can tell upon arrival that entanglement between quantum memories has been established. When this happens, attempts to do so are stopped and the entanglement is stored in memories before being analyzed.

Another key point of the experiment has been the use of multiplexing, the ability of a system to send several messages at the same time through a single transmission channel. In classical telecommunications, it is a tool that is frequently used to transmit data over the internet.

In the quantum repeaters, this technique is a bit more complex. With standard quantum memories, one has to wait for the message announcing the entanglement to return to the memories before being able to try again to create a new entanglement.

They teach us the theory about quantum physics and how anti-intuitive it is, but getting to the laboratory and experiencing its effects, such as entanglement, and being able to control it is amazing.

But through the AFC (Atomic Frequency Comb) protocol Enabling this multiplexing approach, researchers can store entangled photons at many different times in quantum memory, without having to wait for the success signal to arrive before generating the next pair of entangled photons.

This condition, called time multiplexing it is an essential characteristic that represents a significant increase in the operating time of the system, which leads to an increase in the final entanglement rate.

Next challenge: quantum bond at 35 km

Also co-author and ICREA professor Hugues of Riedmatten recalls that they conceived the idea 10 years ago and advances: “The next steps are to take the experiment out of the laboratory, to try to link different nodes and distribute the entanglement over much greater distances, beyond what we have achieved now. In fact, we are in the middle of getting the 35 km first quantum bond, which will be held between Barcelona and the ICFO, in Castelldefels ”.

In any case, at the moment the team has already made a breakthrough: “They teach us the theory about quantum physics and how anti-intuitive it is, but getting to the laboratory and experiencing its effects, such as entanglement, and being able to measure and control them is one pass ”, concludes Darío. 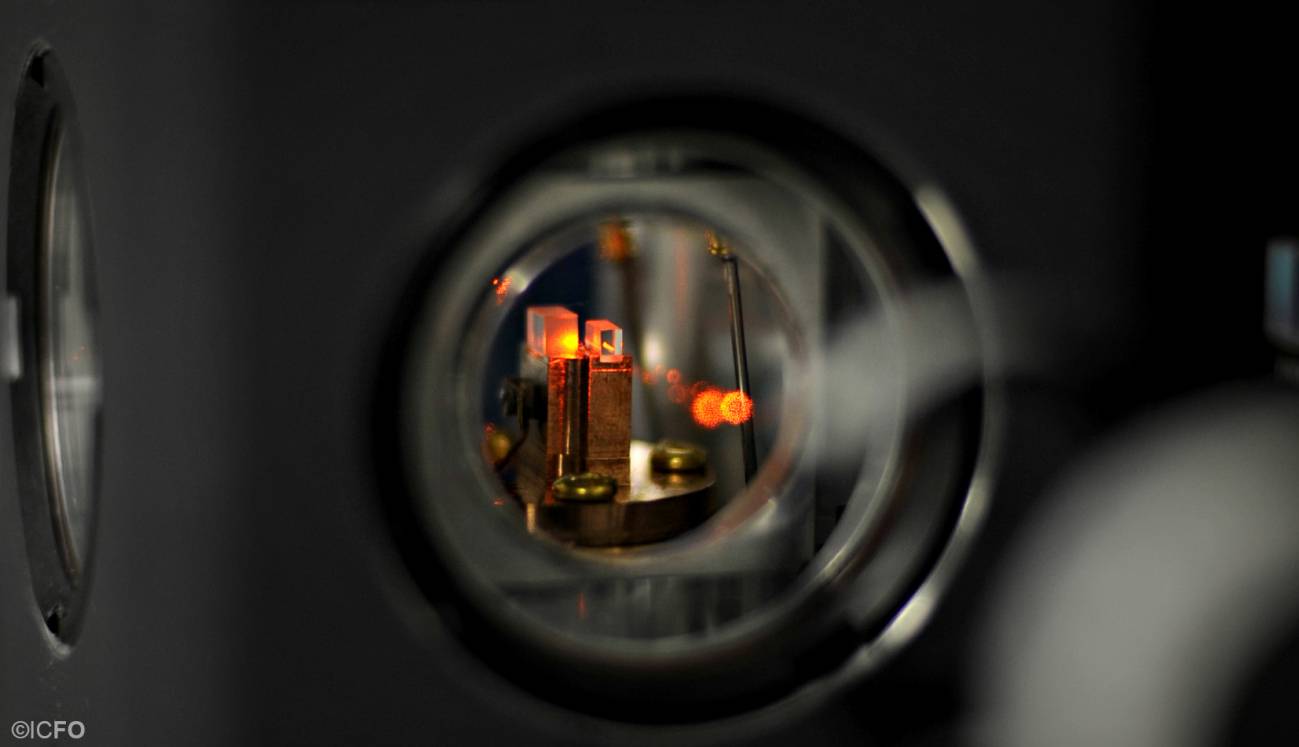 Quantum memory crystal inside the cryostat in the laboratory. / ICFO