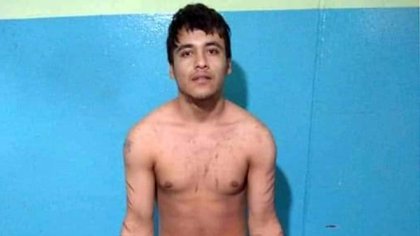 The investigation into the rape and murder of Rocío Abigail Riquel, 9-year-old, in Tucumán, is practically clarified with the news that reached the prosecutor’s mail Ignacio López Bustos: the expertise confirmed that DNA samples taken from the baby’s corpse coincide with those of the genetic profile of Jose Antonio Guaymás, a young man of 25 years. The suspect, known by the nickname “Culon”, Died as a result of the beatings of the girl’s relatives and neighbors, who searched for him for three days and finally found him in a mountain.

On October 21, about 50 people beat him punching, kicking, macheting him, impaling him and trying to set him on fire the alleged rapist and murderer, who had been released from jail a week before the event and had been seen with the minor on Saturday shortly before she disappeared.

The matching DNA results were incorporated into the file and this test is likely to close the case in the next few hours. The Scientific Investigation Team of the Public Prosecutor’s Office carried out the test using semen and skin samples taken from Abigail’s T-shirt and hair and from the land where the act was committed. “The same unique DNA profile was detected that would correspond to a male individual. Said male profile coincides with the DNA profile of Guaymás, José Antonio “, the report concluded.

Sensitive images of the lynching against Guaymás

“If we find it first, we liquidate it”, had threatened the residents of Villa Muñecas, the humble neighborhood of San Miguel de Tucumán where Abigail lived and was murdered. For them there was never any doubt that “Culón” was the author of the crime. They did not wait for the Police, or the Justice, much less a genetic test. And the they killed as soon as they found him.

Just during the night after the lynching did the Justice confirm, via fingerprints, that the murdered man was Guaymás, who collected criminal records: 19 cases in 10 years, all for robberies, robberies or assaults committed aboard a motorcycle. In fact, he had been released from prison three days before the murder of the girl for an attempted robbery committed in July.

“Culón” lived in the same neighborhood as Abigail with her mother, her sister and her nephews. They lived in a square that was burned after the fact. On the Saturday morning of the crime, Abigail told her parents that she was going to play at a friend’s but never made it to her destination. Guaymás is suspected of intercepting her and taking her to an area of ​​earth mounds, about 400 meters from the girl’s house, where he abused her and killed her.

“The anal, vaginal and oral swabs were done and we have to wait for the results. But it is clear that there are signs of abuse that resulted from the autopsy ”, sources of the case had explained to this medium. The forensic examination also determined that the assailant made an attempted carnal access. “Apparently she fought back and he tried to suffocate her from behind. He is hit on the right side of the head with a lump of hard earth. The hypothesis is that (the murderer) tries to penetrate her, suffocates her and hits her on the head and the blow is what kills her ”, they explained. 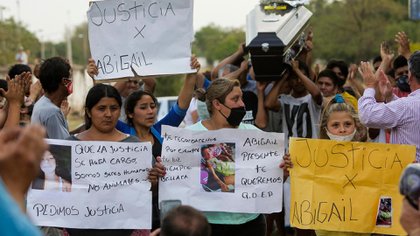 A couple of witnesses not only told investigators that they had seen him pass by with the baby. They also spread it in the neighborhood, and the neighbors went out to look for it and found it the following Wednesday in a mountain known as El Manantial, far from the capital of Tucumán. During the search, a lawyer called the investigators and told them that “Culón” was going to turn himself in. At that time they were concerned that he would take his own life, as he had a history of it.

When the Guaymás neighbors found him, he tried to confuse them. He told them “It wasn’t me, it was my cousin.” But his fate was determined. The Riquel’s friends and family knew him and identified him by the scars on his arms, typical cuts of hard drug addicts in abstinence, usually generated in conditions of confinement. And so they killed him. Guaymás’ body was transferred to the Judicial Morgue and after several days without anyone claiming it, it was buried in a common grave.

The tortuous death of Pelozo Iturri in a dungeon: in a historic ruling, they confirmed life imprisonment for eight penitentiaries

Exclusive: the victim of one of the most aberrant cases of pedophilia in Argentine history breaks the silence 17 years later