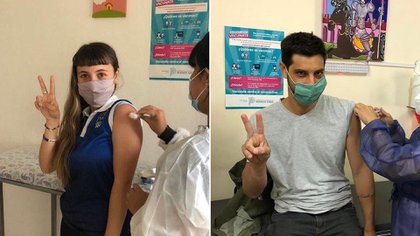 The “vaccine-gate” scandal reached the province of Buenos Aires. A criminal complaint was filed this Monday in the courts of La Plata for the Minister of Health to be investigated Daniel Gollan and to all those who may have received the vaccine outside the protocol. The presentation also demands that the province be encouraged to make public the list of all those who received the Sputnik V dose.

The complaint was filed by the senator of the province of Juntos por el Cambio Juan Pablo Allan and the lawyer Florence Arietto, who was a security officer in the last part of the Cambiemos administration. In the presentation, it was claimed to investigate the breach of public official duties and misappropriation of public funds, By virtue of decree 41/2021 that appointed the Minister of Health of the Province in charge of the vaccination operation.

As part of the process, the presentation urges that the government of the province of Buenos Aires is called “immediately” to open the data related to vaccination. “In this way, the size of the damage and the criminal scope could be known; Thus, it would be known to whom the vaccine has been inoculated, transgressing the established guidelines and consummating this ethical degradation ”, states the text of the complaint to which he agreed ..

In addition, they requested that the state prosecutor of the province of Buenos Aires be summoned to become the complainant. “It is of extreme institutional gravity, in addition to ethically and morally damning, that officials and civilians in general who were not in the priority risk group have been inoculated with a vaccine that – it is reiterated – at the moment it is scarce even to satisfy the demand of that own predetermined group of people “, it was maintained. 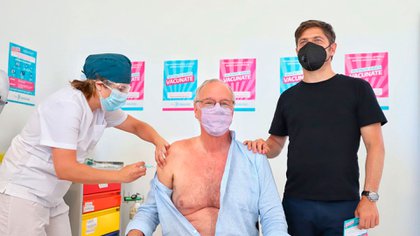 the minister Gollán receiving the vaccine

In particular, the complaint aims to analyze the actions of “the head of the provincial Health portfolio, as the health authority responsible for carrying out the vaccination campaign in the province of Bs. As” because among its functions the responsibility of the ” qualification, registration and certification of the people who request their incorporation to the ‘Free and optional public provincial plan against COVID-19’ ”within the framework of the health emergency.

“During the last days there have been various and alarming cases of people who received the Sputnik V vaccine against COVID-19 in serious violation of the order established by the regulations that seek – with incontestable epidemiological criteria – the immunization of the provincial population with a order given –basically- by the complementation of two variables: the risk and the shortage of vaccines. So, then, as of today in our district, the initial vaccination plan informed by the government of the province of Buenos Aires must be followed ”, it was indicated.

And noted that “In the absence of a public registry of beneficiaries of the aforementioned vaccine, a circumstance that motivated the presentation of a bill by a group of Buenos Aires legislators who warned of the irregularities committed and with the risk of escalating in severity, is that we We are obliged to present here a menu of publications on social networks and the media that give an account of the facts described so that you can promote the indispensable research ”.

The list added militants from the Frente de Todos; officials of the Municipality of Navarro, denounced by councilors; 18-year-olds being vaccinated by Health personnel in Chivilicoy; Jorge Yuse, a member of the Evita movement (disclosed on his own Instagram account), and Santiago Maggiotti, former mayor of Navarro and current Secretary of the Nation’s Habitat (disclosed on his own Instagram account). Also appear Javier Recaite, municipal employee of Navarro and Ignacio González, a leader of the La Cámpora group and former candidate for mayor of Saliqueló.

“As can be seen, from the publications it can be inferred that currently the vaccination system and program are seriously and criminally violated, to the point that it is not possible for the citizen to trust that there is a correlation between what is declared by the provincial authorities and the reality. Furthermore, if at this point something is clear, it is that in no way is the norm being complied with ”, it was stated.