No: the core of the Earth is not perfectly symmetrical, and that will affect the nature of our magnetic field in the long term.

Much of why we know almost nothing about the core of the Earth It is because samples cannot be taken from it. Located 5,000 meters below the surface, the information we have is the result of centuries of seismological and geophysical observation. Even today, all we have are models of their behavior. However, a recent study from Cambridge and Bristol, in the United Kingdom, ensures that is growing at uneven rates. This is the reason.

The core of the Earth is not spherical

Unlike what they taught us in school, the earth is not exactly spherical. Rather, it has ridges, peaks, and valleys that make it our planet looks like a perfect blue ball From space. Seen in another way, the representations we have of its layers are not exact, but They are for illustrative purposes only. However, this is not exactly the case. The same trend seems to be replicating within him.

As Jessica Irving, a Bristol seismologist, writes in her article for The Conversation, “Earth’s core was formed very early in the 4.5 billion year history of our planet.” Passed just 200 million years before the center of our planet finished taking shape. Gravity dragged iron into the heart of the young planet, leaving lighter minerals – such as silicate – to form the crust and mantle.

The formation of the Earth captured a lot of heat inside. However, it has been lost in the course of its natural history. This is not necessarily negative: on the contrary, it favored that our magnetic field will be formed, that protects us from solar storms and enables life as we know it. Most likely, according to British scientists, it will not be like this forever.

We suggest: What are the strange lights in the sky that glowed during the earthquake?

A planet without a magnetic field? 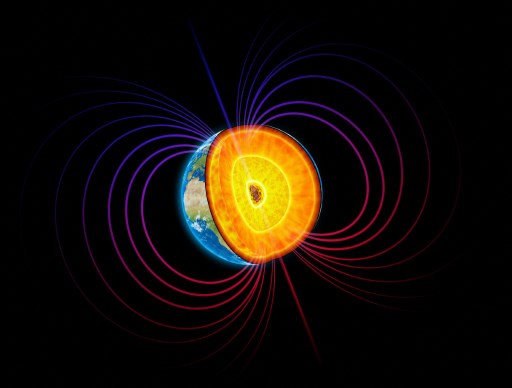 Although this thermal energy was lost over time, the Earth’s core continues to grow. In the same way, it continues to cool down over the millennia. Irving assures, based on his study published in Nature Geoscience, that this will have a definitive impact on the forms of life that exist on our planet, since will cause alterations in our magnetic field.

With the gradual loss of heat, the Earth’s core has crystallized for millions of years. Our earlier understanding of this structure as spherical led us to think that it grew and cooled at the same uniform rate. However, this is not the case: as it is not a perfect ball, cools and grows unevenly. For this reason, in different regions it presents different seismic waves.

The team of British scientists explains it in terms of what happens to ice cream that is left in the freezer:

“This uneven growth is like making ice cream in a freezer that only works on one side: ice crystals form only on the side of the ice cream where cooling is effective. On Earth, uneven growth is due to the rest of the planet absorbing heat more quickly in some parts of the inner core than in others ”.

Despite this, our planet is not in danger of capsizing. What is very likely to happen, in billions of years, is that the magnetic field is lostas the nature of the Earth’s core is changing. The more solid it becomes, less we will have this natural coating, which protects us from the Sun and its energy storms.

No: no solar storm will cause a “massive blackout” on Earth