We don’t know of anything bigger in the Universe than galaxy clusters. These gravity-bound structures can be made up of thousands of galaxies bound together, and sometimes hot gas or dark matter. Now, a group of researchers has unveiled a most curious structure in the galaxy cluster Abell 2877: a massive jellyfish-shaped plasma structure.

The Abell 2877 galaxy cluster is located about 300 million light years from us. It would be just another galaxy cluster if it weren’t for what astronomers at the International Center for Radio Astronomy Research (ICRAR) in Perth, Australia, have found. Visible only on a narrow radio frequency, is a gigantic plasma structure that is more than a billion light years in size.

The study has been collected in The Astrophysical Journal and details what this plasma structure looks like. A most curious structure for astronomers not so much because of its jellyfish shape but because of the fact that barely visible in radio frequency spectra. It is normal that some structures are only visible in certain bands of the spectrum, but never before has a structure as large as this one that “disappears” so quickly when changing frequencies.

A phoenix more than a jellyfish

The fact that the structure is only visible at a very narrow frequency makes astronomers think that perhaps it is a “radiofenix”. This nickname is placed on some spatial phenomena that are characterized by being born, dying and appearing again later … such as the mythological bird of the same name, the phoenix. 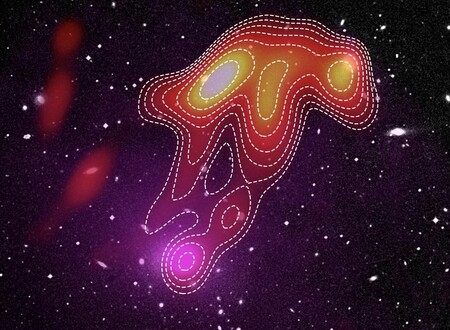 They estimate that the structure was born from a great cosmic explosion such as the explosion of a black hole. Over time it faded as it expanded and its electrons lost energy. However, at some point another cataclysm caused it to revitalize and recharge energy.

If this occurs, the second explosion or cosmic event is capable of revitalize energy in electrons causing it to shine again. This could cause the shape to glow only at certain wavelengths and fade at others, according to the authors.

At the moment it is only estimates that researchers can make, based on the data they have been able to collect to date computer simulations performed. Currently in Australia the Square Kilometer Array is also being built, a network of hundreds of radio telescope antennas with which they hope to study this curious structure in more detail.