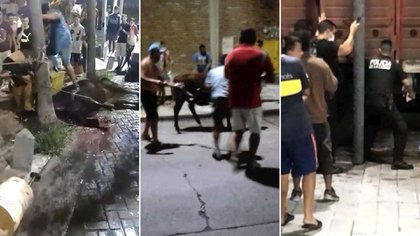 Yesterday afternoon the entry and exit of the Liniers Hacienda Market, in the Mataderos area of ​​Buenos Aires, was closed as a result of a protest by neighbors due to an act of insecurity in the Ciudad Oculta neighborhood. In principle, according to the testimony of the protesters, days ago they killed a young man and so far the body has not been handed over to the relatives.

All this mobilization and protest resulted in enormous complications for the truckers who arrived at the place with the farm after making an extensive trip. There was a significant congestion of trucks that were unable for a few hours to unload the farm for its corresponding commercialization today.

For this reason, some truck drivers sought to take alternative roads. But unfortunately One of the truckers, when trying to carry out this maneuver by police indication to enter a street near the Market, could not leave it in the middle of Ciudad Oculta, at a time when the truck, which was transporting about 70 animals, was surrounded by an important group of neighbors.

According to the carriers commented to some media, the neighbors demanded the payment of a “toll”. It was thus that the trucker in order to continue his journey gave the neighbors a young bull, which they proceeded to slaughter in the middle of the street.

The events of insecurity are more and more frequent in the Federal Capital and its surroundings, according to the transporters themselves. A trucker last night commented to ., on what happened in Liniers: “In the protest they threw stones at the trucks and attacked many of my colleagues. We who walk in the trucks and enter the refrigerators cannot be that we have to ask the police for custody to be able to unload or pay a resident of the village 500 or 600 pesos so that they do not rob you. The situation is very complicated”.

For his part, Manolo Lamas, a hacienda transport entrepreneur and a benchmark on logistics, told this medium: “There are many haulers of property, drivers and businessmen who have decided throughout the country that they no longer go to Buenos Aires and in other cases they also do not travel to refrigerators in the suburbs, such as San Fernando, Quilmes, or Bernal Oeste, where you have to pay to an inhabitant of the village so that you can enter the area and not be robbed. What happened last night is a photo of what happens to the haulage transporters nationwide in Greater Buenos Aires ”.

To all this, Lamas said in relation to what happened in the Liniers Market in the midst of the protests of neighbors: “You have to place yourself in what happened to the truck driver, being in a village, with people who have nothing to lose and that threatens to unload an animal. In addition, they are drivers who live in other localities, with less population and who are not used to this type of situation. The events of insecurity are frequent when the trucks are stranded in the Liniers Market on the side of the town or when that sometimes happens in a refrigerator in Greater Buenos Aires ”.

And finally, he referred to the actions of police personnel in the face of increasing insecurity: “The police often act in a lax way when they have to defend the private property and physical integrity of those who work.”