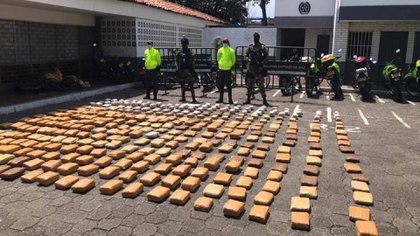 Narcotics seized by authorities in Cali, the raids were carried out in private homes / (El Tiempo).

In 53 raids, the Cali Metropolitan Police managed to capture 60 people who belonged to two drug trafficking organizations with transnational reach and had the capital of Valle del Cauca as a storage center for their narcotics.

According to information from the Ministry of Security and Justice, at least one and a half tons of narcotic drugs were seized by the authorities, the drugs belong to two criminal structures, which would be obtaining profits of more than 200 million pesos per month for the distribution of around 126,000 doses.

Well, the gangs dedicated to drug trafficking would have set up spaces for drug production in different homes. For example, the rooms served as cellars, the dining rooms as places for weighing and dosing, and in the rooms the packing of narcotics was done.

The transnational gang was dismantled in a joint operation with the Prosecutor’s Office, the Police and the National Army, also finding narcotic substances in wooded areas, strategically chosen by criminals so as not to arouse suspicion and from where they were also supplied in small doses.

According to Brigadier General Manuel Vásquez, commander of the Cali Metropolitan Police, 38 men and 22 women were captured and left at the disposal of the authorities for prosecution:

In coordination with the Prosecutor’s Office, in a 360-degree action, 53 raids were advanced in different sectors of the city, achieving the capture of 60 criminals, members of micro-trafficking structures and their lines of sale

Those captured are accused of committing the crimes of conspiracy to commit a crime, homicide, drug trafficking Y illegal carrying of weapons. Several of those previously captured have faced prosecutions for the same crimes they are accused of, in fact, some were already serving house arrest measures as part of previous sentences and were still committing crimes.

According to the Police, one of the largest dismantling and capture operations was carried out in a commercial establishment north of Cali, on a site that served as a facade to hide approximately a ton of narcotics.

Apparently, the substances were marketed in school environments, where the sale even occurred with the presence of minors.