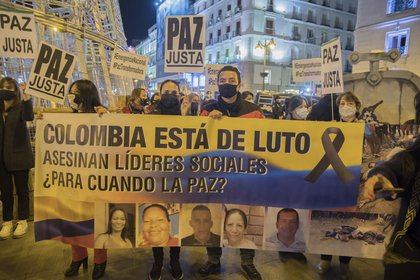 Since the signing of the peace agreement with the former FARC guerrilla in 2016, 1,128 social leaders have been assassinated in Colombia. Photo: ALBERTO SIBAJA / ZUMA PRESS / CONTACTOPHOTO

The first month of 2021 has not ended and the country continues to record the murders of social leaders and signatories of the peace agreement, The most recent homicide was that of Juan Carlos Correa, a former combatant of the former FARC guerrilla, who was killed in the municipality of San Andrés de Cuerquia (Antioquia), in western Colombia.

According to information published on Twitter by the Institute for Development and Peace Studies (Indepaz), the violent event occurred on Saturday after a group of armed men forcibly took Correa away. Hours after the kidnapping, the former combatant was found dead.

Meanwhile, in Dosquebradas (Risaralda), In the coffee region of Colombia, last Thursday, January 21, Janeth Zapata, a social leader in that municipality, was murdered.

The woman had been characterized by her social and community work in the Bombay 3 neighborhood, in Dosquebradas. In addition, he belonged to the Communal Action Board of Comuna 9, and had reported that he was receiving threats.

In the last week The social leader José Abadía Parra, also in Risaralda, was also assassinated. The homicide was reported on Saturday on the Indepaz Twitter account, but it was perpetrated on Wednesday in a sector known as the ‘Y’ in the town of Puerto Caldas, rural area of ​​Pereira.

Abadía was a member of the Nuevo Amanecer Foundation and for his work had been displaced from the municipality of El Dovio (Valle del Cauca), in western Colombia. One of the brothers of this social leader had suffered a grenade attack in that same municipality.

Despite the fact that Abadía had denounced the threats, and the violent act against his relative, the social leader had his security scheme withdrawn, according to Indepaz.

These deaths are in addition to that of the leader Linda Díaz Romero, who was killed on Tuesday by armed men who arrived at her home in the township of Cáceres, in the municipality of Caucasia (Antioquia).

The leader was recognized for her work in politics in this area of ​​Antioquia, she was even a candidate for the Municipal Council of the U Party in 2015, and worked in several educational institutions in the municipality.

In the last week, the leader Yubitza Robira Montalvo, who advises women’s projects in the Sierra Nevada de Santa Marta (Magdalena), was also displaced. within the implementation programs of the peace agreement, in this area of ​​the Colombian Caribbean.

The incident occurred last Monday, when 5 armed men arrived in the rural area of ​​Ciénaga (Magdalena), who stamped her and warned her that she had to leave because “The boss” would return to that place.

This displacement was reported by the Foundation Committee for Solidarity with Political Prisoners, Atlantic section, who also denounced that due to the negligence of the Ombudsman’s Office in that area, the Police could not be alerted in time to this harassment.

This leader had received threatening pamphlets in September 2020 where they pointed out that she was a collaborator of the criminal gang of Los Pachencas.

In this way, the country completes the alarming figure of 14 murdered leaders and 5 former FARC combatants killed in the first month of 2021, according to Indepaz figures.

In this Foundation they have registered 310 murders of social leaders in 2020, and 1,128 since the signing of the peace agreement in 2016.

Precisely while these homicides were taking place in Colombia, in New York (United States) on Thursday the report on the progress of the agreement was presented to the United Nations, where they highlighted the progress that was made in terms of peace with the former subversive group, today a political party.

However, by the UN There were objections about the lack of effectiveness of the government of Iván Duque to protect the lives of the leaders and ex-combatants of the Farc.

“Although multiple measures have been taken to try to address this violence, each murder is a tragic blow to peace, and a call to ensure that the security measures taken by the authorities are translated into effective results in the territories,” he said. Carlos Ruiz Massieu, head of the United Nations Verification Mission in Colombia.

They found Ana Patricia Mejía, the woman who disappeared in Cali on Thursday

On the brink of collapse: the central cemetery of Cúcuta does not suffice with the number of deaths