When they occur natural disasters that entail material and human losses, such as floods, fires or earthquakes, it is common to see how hitherto unknown people join forces to rebuild and repair the damage caused.

According to a study published in the journal Current Biology, this same behavior, so common among people, has been recorded in the rhesus macaques (Macaca mulatta) from Cayo Santiago island, in Puerto Rico, after the passage of Hurricane Maria in 2017.

The macaques built new relationships rather than strengthening existing ones and tended to put up less resistance to form new connections.

“The macaques built new relationships rather than strengthening existing ones and tended to put up less resistance to form new connections,” he says. Camille Testard, study author and doctoral student at the University of Pennsylvania (USA).

This researcher, together with her team, began to analyze the behavior of the macaques on the small island of Cayo Santiago (0.14 km²) before the hurricane hit the country, which left more than 3,000 dead. Although the storm did not directly kill many monkeys, it did reduce the island’s vegetation by 63%. 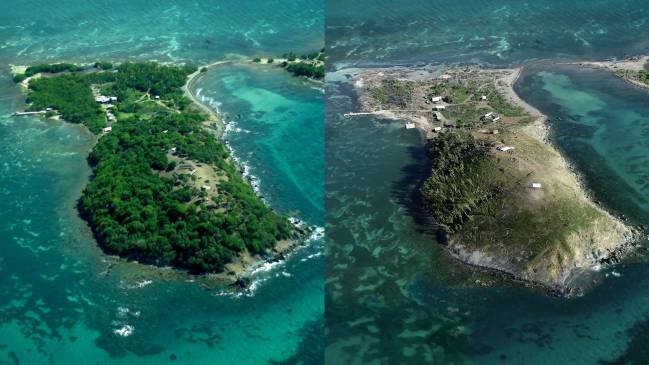 After the storm, Testard and his companions noticed a change in the behavior of the apes, who seemed more tolerant of other individuals. Even with those who before the incident were competitors.

In general, the primates of the Macaca mulatta species have a well-known social character. However, they live in highly competitive societies and can become very aggressive with other members of the group.

Expansion of your social relationships

This was the reason that led them to analyze the social connections of the macaques. “We investigated whether and how monkeys readjusted their investment in social relationships in response to Hurricane Maria, using a data set that encompasses the behavioral observations that occurred. between three years before and one year immediately after Hurricane ”, is detailed in the study.

Macaques increased the number of individuals with whom they tolerated sharing limited resources, such as shaded space in which to sit

Among the data collected on two groups of apes, the scientists observed behavioral alterations, such as which monkeys they spent time with, which pairs they selected, whom they went to groom, or with whom they shared shade.

“We were hoping that the monkeys would use their closest allies to deal with the ecological devastation of the hurricane and that they would invest in their existing relationships. Instead, the macaques expanded their social networks and increased the number of individuals with whom they tolerated sharing limited resources, such as shaded space in which to sit, ”he explains. Lauren Brent, co-author of the study and researcher at the University of Exeter in the United Kingdom.

According to their results, the observed specimens had forged new relationships after the storm, such as with unknown or unfamiliar monkeys, “A pattern observed in humans after catastrophic events that affect entire populations,” the study highlights. This peculiarity resulted in a society more tolerant as a whole.

The authors believe that the findings in macaques can help people understand how we cope in the midst of natural disasters.

For the researchers, this finding represents “strong evidence for flexibility in the ability of Rhesus macaques to negotiate your social landscape after a natural disaster ”, they explain at work.

Although it is unknown what effects this behavior may have in the long term on life expectancy or number of offspring, the authors believe that the findings in macaques can help people understand how we cope in the midst of natural disasters.

“Social relationships have a surprisingly large impact on human health and being in a poor social environment is a high risk factor for human beings, as high as other risk factors for health, such as smoking,” he considers James Higham, a co-author of the study and a researcher at New York University. “It is not clear how variation in the social environment impacts our biology,” he concludes.