There are more and more developers. This is at least shown by a new study State of the Developer Nation, which confirms which are the programming languages ​​with the most followers and which ones have been winning and losing in recent months.

But, in addition, the study confirms that remote work is increasingly a norm for these types of professionals.

More than half know JavaScript

SlashData’s semi-annual State of the Developer Nation report is based on a survey of more than 19,000 developers combined with researchers’ estimate of the global number of active software developers. This number, they believe, has risen from 21.3 million in October 2020 to 24.3 million today, a increase of about 14 percent.

According to the survey, there are 13.8 million JavaScript developers (including TypeScript and CoffeeScript), up from 12.4 million last October. That makes him the language with more programmers, well ahead of Python that, with 10.1 million, hangs the silver medal. They are followed by Java with 9.4 million; and C / C ++, with 7.3 million. 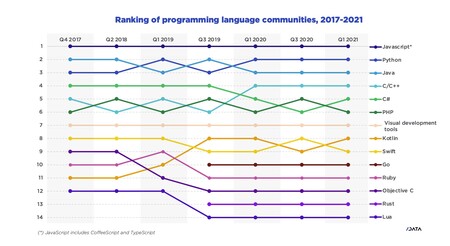 Perhaps this is why it is not surprising that many expert developers recommend learning JavaScript as the first language.

Python, on the rise

Python continues to gain in popularity and its growth rate is 20 percent, “the highest in any large community programming languages, “according to the report. Although Rust is growing faster, it should be noted that it is growing from a smaller user base. In any case, it has gone from 800,000 developers to 1.3 million active developers.

Meanwhile, PHP remains in sixth place with its 6.3 million professionals, behind C # with 6.5 million. These two languages ​​are simultaneously their positions. The latest change has been motivated by the fact that PHP has seen its developer base increase by 200,000 new professionals, while the number of active C # developers has increased by 500,000.

In addition, the report also analyzes the impact of the pandemic on remote work among developers. One in four assures that “I have always been at a distance”, but 30 percent admit that they “became completely remote” due to COVID-19. In addition, 11 percent expect that this change will be permanent.

The larger the company developers work for, the more likely they are to work remotely: 50 percent of developers working for companies with more than 5,000 employees are fully remote, compared to just 25 percent of those who work for smaller companies.

Furthermore, the trend towards remote work is more evident in Western Europe and less in East Asia.