Home>World>these are the health criteria

The fifth and last update (for now) of the Vaccination strategy against COVID-19 in Spain published on March 30 by the Ministry of Health includes for the first time the prioritization of cancer patients among people with “very high risk” conditions. However, not all citizens with cancer will be ahead of the immunization campaign.

Health has calculated that they will be about 170,000 Oncology patients will be prioritized, but this year the Spanish Society of Medical Oncology (SEOM) estimates that more than 270,000 new cancers will be diagnosed. So who will enter and who will be left out in the government’s prioritization?

According to the latest update of the strategy of the Ministry of Health, it specifies that people with a “solid organ cancer being treated with chemotherapy cytotoxic, solid organ cancer metastatic and patients receiving radiotherapy due to tumors of thoracic location with risk of pneumonitis (esophagus tumor, radiotherapy on lung metastases, etc.). “Likewise, Health includes among” very high risk “people those who suffer or have suffered a oncohematologic disease in the last five years or that is not controlled “and / or ECOC 3-4 and / or severe neutropenia, regardless of the time since diagnosis”.

In the words of the president of the SEOM, Álvaro Rodríguez-Lescure, this includes anyone who is undergoing “active chemotherapy treatment or who suffers from advanced or metastatic cancer.” This prioritization includes patients who “really, in a very general way, involve greater morbidity and mortality from covid-19.”

Who will not be prioritized?

This means that patients who have been diagnosed with cancer but who do not require immunosuppressive treatment, will not be prioritized for the moment by the Ministry of Health in the immunization campaign against covid-19. It would be the case of, for example, a woman with breast cancer recently diagnosed but receiving complementary hormonal treatment after surgery, which is based on pills and does not involve immunosuppression. And that, in addition, they do not enter the vaccination calendar due to their age or because they are part of other groups prioritized by Health, such as essential employees.

He would also have to wait for anyone with a diagnosed tumor but to be found in the review and follow-up phase and without active treatment, such as “a colon cancer operated for three months that does not require treatment with chemo or radiotherapy and is not old enough to receive the vaccine. “Or anyone already cured of cancer, who has overcome the disease and is not under treatment.

Of the more than 270,000 new cancers expected to be diagnosed this year, “not all will need chemotherapy”

And it is that, of the more than 270,000 new cancers that the SEOM plans to diagnose this year, “not all will need chemotherapy, nor will they be metastatic and many will be treated with drugs that are not chemotherapy and will be cured with surgery“, explains the also head of the Medical Oncology Service of the General University Hospital of Elche (Alicante).

Not in favor of pointing out specific cases

However, Rodríguez-Lescure defends that this proposal, elaborated after “much discussion” between the medical entities that have collaborated in its elaboration, is “more inclusive“, as he recalls that” an attempt had been made to personalize in the patients of lung cancer but thus it was left without covering other patients who require chemotherapy, who have immunosuppression, who have comorbidities, who have metastatic stages and who are not lung cancer “.

“We were not for the task of pointing out very specific cases“Because, emphasizes the oncologist president of the SEOM, the priority must be to vaccinate the entire population.” I cannot prioritize a patient at risk over another patient at risk. It seems complicated to me. It is impossible to measure who is more at risk of the two, “he says.

However, the current situation of dose shortage has forced to prioritize population groups “with clearly high risk compared to the normal baseline of the population.” This is equivalent, in cancer patients, to immunosuppression, What is it a general condition of risk. “There are reflected patients undergoing chemotherapy treatment and those with a tumor in a matastatic state, which implies a compromise of the general state and this implies a greater risk (due to covid-19), regardless of the treatment,” argues Rodríguez-Lescure.

Where to vaccinate cancer patients?

From the SEOM they also share the proposal to vaccinate cancer patients in their healthcare centers, “in the medical oncology services“Where this population group of” very high risk “for covid-19 goes periodically to carry out the treatment, monitoring and control of their pathology, making it” easy to capture these patients. “ 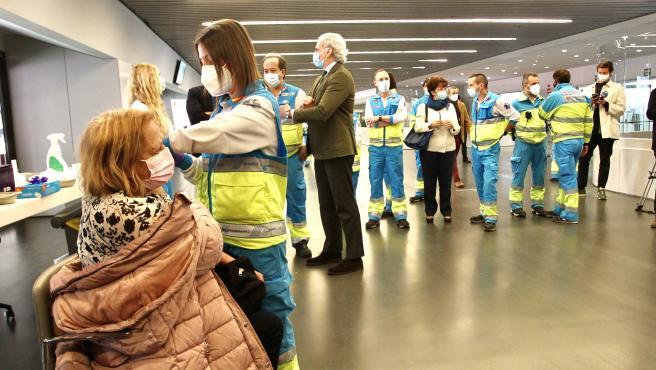 For this expert, the priority should be “to comply with the vaccination program initially planned and vaccinate as large a population as possible“Well,” if there is a tool that contributes to curbing the pandemic, that is the vaccine, but the vaccine will be if the intended target is reached: the maximum population. “

This week it is expected to take a leap forward towards mass vaccination in Spain with the arrival of 1,241,370 new doses of the Pfizer / BioNTech vaccine, which is added to the batch of 1,056,500 doses developed by the University of Oxford and AstraZeneca. In total, Spain has so far received 9,703,645 vaccines, of which 8,548,598 doses have been administered, 88.2% of those delivered to the communities, according to Health data this Saturday